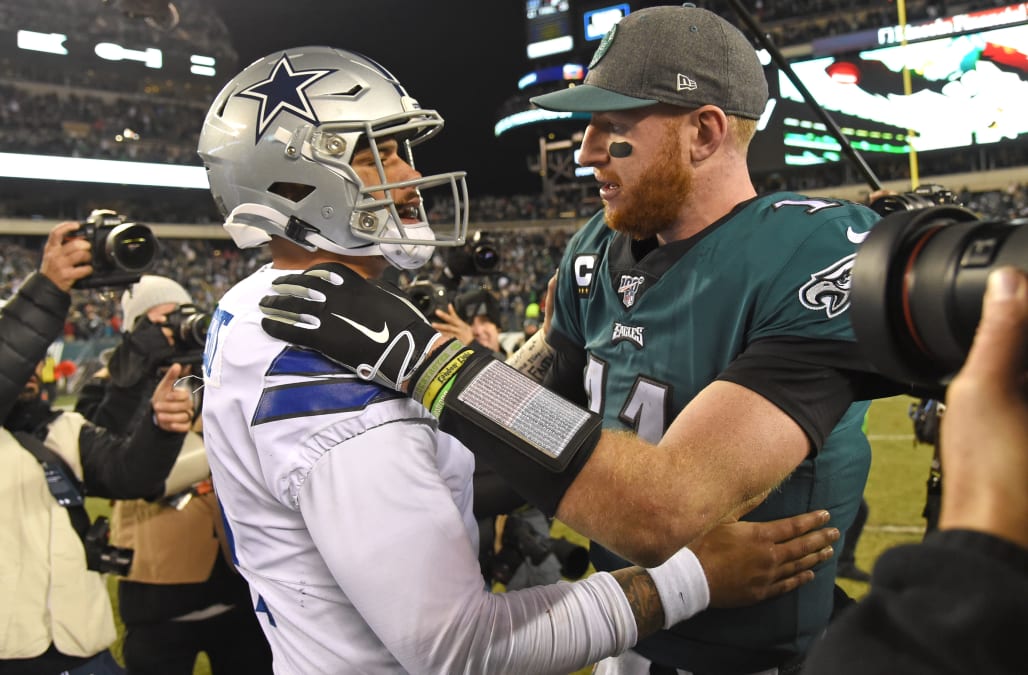 PHILADELPHIA — It took the better part of 16 weeks. The better part of 30 combined games. Fifteen each for the Dallas Cowboys and Philadelphia Eagles, all without an answer to the question: Would anybody like to win the NFC East?

And finally, late in the second half of the showdown that promised an answer, the Eagles stood up. Carson Wentz had earlier in the afternoon. So had the depleted offense around him. But with the Cowboys driving for the tie, down 17-9 with under two minutes to play, the Philly defense had to stand tallest. And that’s exactly what it did.

On fourth-and-8, with the game and a season on the line, Eagles cornerback Sidney Jones broke up a Dak Prescott pass in the corner of the end zone. The Eagles kept Dallas out of the end zone over 60 minutes, and seized control of the division with a 17-9 win.

They didn’t quite book a playoff date; didn’t quite answer any questions definitively.
They’ll have a chance to do that next week against the Giants.

The Cowboys, meanwhile, will be left to win and hope. And in all likelihood, they will be left to rue missed opportunities to grab an NFC East title that was seemingly handed to them. Somehow, they never did.

Philly was pumped for a battle of mediocre teams

The mediocrity, however, continued for two more hours. At halftime, the question – would anybody like to win the NFC East? – remained unanswered.

Much of the first half seemed like, felt like, and in many cases was Eagles dominance. They jumped out to a 10-0 first-quarter lead. They held Ezekiel Elliott to 9 yards. With less than a minute to play in the half, they’d held the Cowboys as a team under 100. They’d gained 223 themselves.

Cowboys blow it in second half

Given the Eagles’ superiority, the entire opening 30 minutes felt like one big missed opportunity. Yet another in a season of them. And the Cowboys, early in the second half, hinted at taking advantage. They drove into Eagles territory. They found some rhythm.

Then Dallas running back Tony Pollard fumbled on a critical third down. Fletcher Cox forced it. Malcolm Jenkins recovered. Doug Pederson’s challenge overturned a down-by-contact ruling and gave the ball back to the Eagles.

The following possession, Prescott missed an open receiver from a clean pocket on third down. Overall, the Cowboys’ fourth-year signal caller played arguably his worst game of the season. With around four minutes to play, down eight, he missed a streaking Tavon Austin for what could have been a 75-yard touchdown. Two plays later, he hit Michael Gallup in the hands 35 yards downfield – but Gallup couldn’t hang on.

Jerry Jones has had enough pic.twitter.com/6UPMvcB3Lv

Prescott drove the Cowboys down to the Philly 19, but was sacked on second down and then under pressure on third and fourth. Jones came up with the crucial pass break-up on fourth down. The booth called for a pass interference review, but the no-call stood.

Eagles fans throughout Lincoln Financial Field furiously hugged. The offense picked up two first downs. And the NFC East is now the Eagles’ to lose.