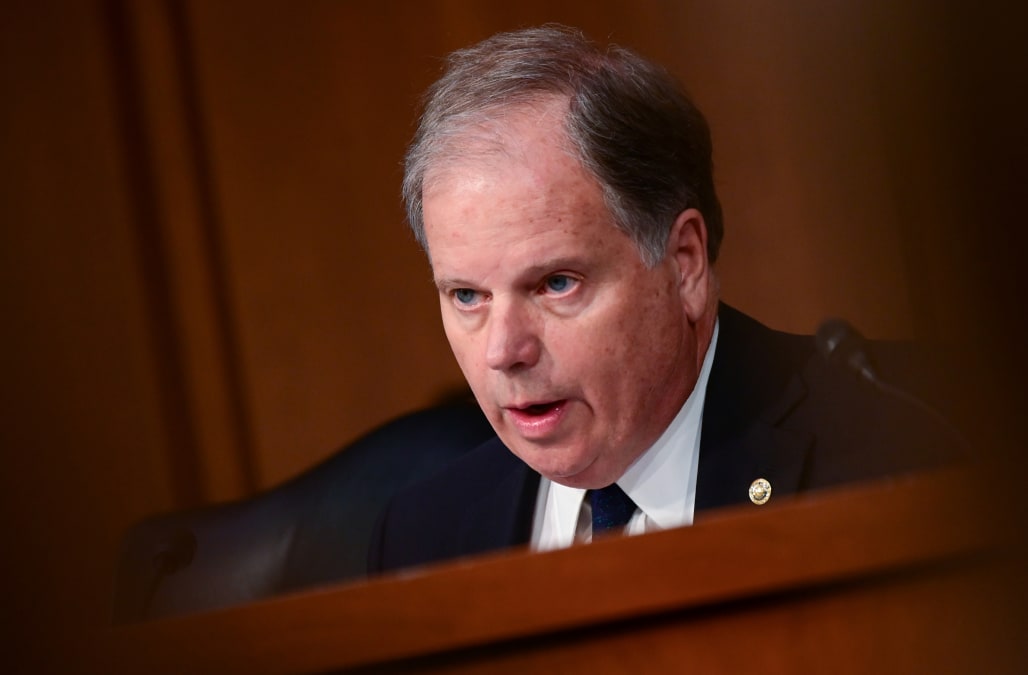 Democratic Sen. Doug Jones dismissed concerns that he will lose his seat if he votes to remove President Trump in a Senate trial, but said he would acquit Trump if “dots aren't connected” over “gaps” in the impeachment case.

Jones, D-Ala., during an appearance on ABC's “This Week,” called the impeachment charges against Trump “really serious allegations.” The House last week voted to approve two articles of impeachment that accuse the president of abusing the power of his office by pressuring Ukraine to interfere in the 2020 election on his behalf and obstructing Congress in its inquiry.

“What I'm trying to do because, quite frankly, I didn't sit in front of the TV set the entire time the last two or three months, I've been trying to read this. I'm trying to see if the dots get connected. If that is the case, then I think it's a serious matter. I think it's an impeachable matter,” Jones said. “But if those dots aren't connected and there are other explanations that I think are consistent with innocence, I will go that way too.”

Jones said “there are gaps” that witnesses who appear at the Senate trial would help fill in. But Democrats’ requests for witnesses and relevant documents have been roundly resisted by Senate Majority Leader Mitch McConnell.

“Now, people can make up their mind with gaps in testimony, but I would like to see a full and complete picture,” Jones said. “And we don't have that because the president has refused to have his people come and testify and deliver documents. He says the Senate's going to give him a fair trial and he wants these folks to testify. Well, let him tell Sen. McConnell to let him come testify and get this — let's get this going as soon as we get back.”

**Click through the slides to see how lawmakers and notable figures reacted.**

Congratulations to Doug Jones on a hard fought victory. The write-in votes played a very big factor, but a win is a… https://t.co/QLFQ88UaLM
Tonight, Alabama voters elected a senator who'll make them proud. And if Democrats can win in Alabama, we can --… https://t.co/m18Cuh5Iuc
Doug Jones. Thank you, Alabama. You’ve elected a man of incredible integrity, grit, and character. A fighter for wo… https://t.co/sOLcmRMQOk
Selma, Lord, Selma. It’s no coincidence that Selma, where blood was shed in the struggle for voting rights for Blac… https://t.co/loo5c2cuo5
Congrats, @GDouglasJones, on your win in Alabama! This is a victory for showing up, fighting to the end, and standing for what’s right.
Doug Jones wins!! In spite of suppression efforts. In spite of Trump. In spite of Bannon. In spite of fear monger… https://t.co/XqWjqqqKiR
Tonight Alabama is sending a powerful message across the country. The American people will fight back against bigot… https://t.co/x99pI2BK4o
Decency wins
Congratulations to my friend @GDouglasJones. He'll be a great colleague. President Trump went all in for Roy Moore,… https://t.co/tSfAQj6qZ0
Welcome to the Senate Doug Jones!
Thankfully, today enough Republicans chose country over party. Tomorrow we must redouble our efforts to support can… https://t.co/IMQrXqyUrF
Thank you Alabama and thank you Doug Jones. https://t.co/o8NXvTrTUX
Congratulations Alabama!!!! https://t.co/jfgPTMqYPp
Suck it, Bannon
God don’t like ugly.
Hot DAMN
Thank you, Alabama!
Thank you for restoring my faith in humanity, Alabama. And thank you for fighting for what’s right, @GDouglasJones.… https://t.co/K8aHz18wpX
Could it be true? Did the bad guy lose this time?
Fifty years after the murders of Addie Mae Collins, Cynthia Wesley, Carole Robertson and Carol Denise McNair at the… https://t.co/ITWvv7nQzM
Charles Barkley finally won the championship!! @GDouglasJones
Congratulations to Senator-elect Doug Jones and thank you to the people of Alabama. Now let’s begin the hard work o… https://t.co/aGuWLNwGzw
Look forward to calling @GDouglasJones a colleague in Congress. Congratulations, Senator-Elect. The people of Alaba… https://t.co/LKUKhjlPt2
I am grateful to the women who had the courage to come forward. Because of them and so many others like them, we ar… https://t.co/w8HTiubCPH
And Steve Bannon strikes again. Any other republican primary candidate would have won tonight. GOP shoots themselve… https://t.co/d15CIDhEcH
“Not only did Steve Bannon cost us a critical Senate seat in one of the most Republican states in the country, but… https://t.co/FyRu6hCRjM
Winners tonight: Black voters, Democrats, Establishment Republicans, Ivanka Trump, Black voters, decency, Black vo… https://t.co/l5wQZ7wXbx
Big win for America. Congrats to Doug Jones. Rejection of Trump and hatred. Game on! 🍻
THANK YOU, ALABAMA!
The voices of bigotry and intolerance are loud, but tonight the people of Alabama were louder. Congratulations Se… https://t.co/WQn9AMRM9C
This puts the US Senate in play in 2018. NEVER EVER GIVE UP ON ANY STATE
Shout out to every last one of you who knocked on doors this week
Alabama Rocks!!!!!
Way to go Alabama! Let’s @BoBikesBama !!
1) MCConnell deserves a lot of the blame for Alabama. Mo Brooks would have won by 20% of the vote, and McConnell in… https://t.co/dWq1Y47SP1
Congratulations, Doug Jones. You were a great US Attorney, and you ran a terrific campaign. You deserve this win. I… https://t.co/NSfv16OTwx
Truly a sad day in Alabama. This is the result of Republican voter suppression. Way to go Richard Shelby👍 you led 2… https://t.co/1BbcHLCP5K
Up Next

Last week, McConnell admitted he had no intention of being “impartial” in the Senate impeachment trial. Some House Democrats then floated the idea of holding back the articles until a fair trial was guaranteed. Democratic Minority Leader Chuck Schumer has said he wants testimony from current and former administration officials, such as former national security adviser John Bolton and Secretary of State Mike Pompeo, which the White House opposes. Schumer said Tuesday he would force a vote on the Senate floor on calling these witnesses, which could put some of McConnell’s Republican allies in a difficult position.

“It wouldn’t surprise me if we got one or two Democrats,” McConnell said about the Senate trial.

“Is he talking about you?” asked “This Week” anchor Martha Raddatz.

“I have no idea what Mitch McConnell's talking about these days,” responded Jones, a vulnerable moderate whose state had not voted for a Democrat in a Senate race in 25 years before his upset victory in December 2017. He is considered to be one of the potential Democratic defectors in Trump’s impeachment trial.

Last year, in another consequential vote, Jones came out against Supreme Court nominee Brett Kavanaugh, who had been accused of sexual assault, despite increased pressure from conservatives in his deep-red state to confirm Trump’s pick.

Jones, defending his position, added, “If I did everything based on a pure and political argument, all I'd — you'd need is a computer to mash a button. It's just not what this country's about, it's not what the Founders intended, it's not what I intend to do.