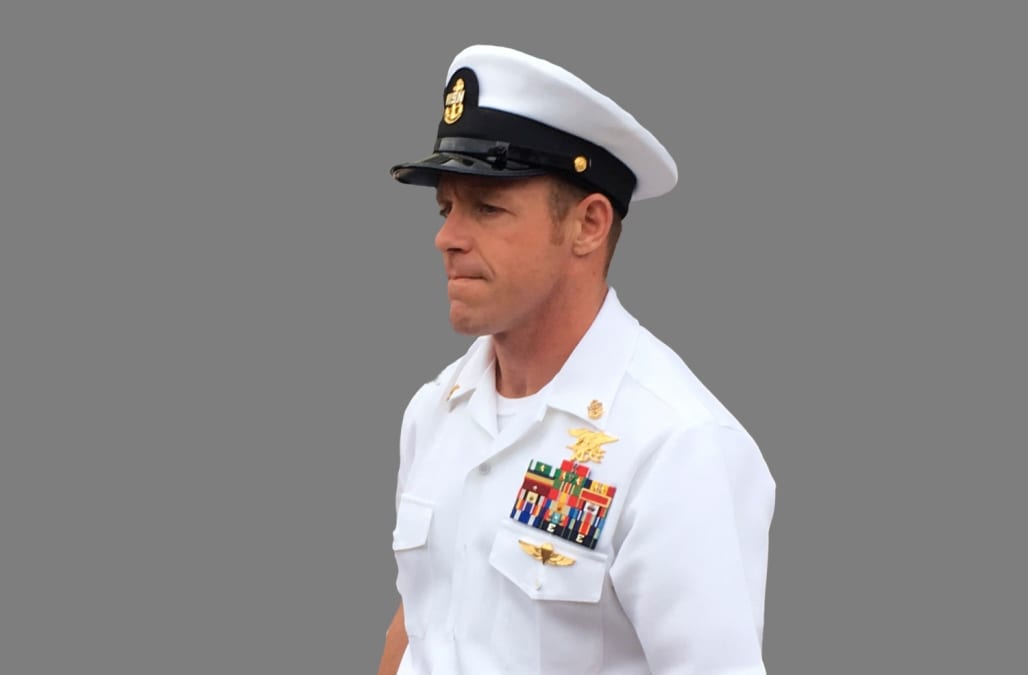 Retired Navy SEAL Eddie Gallagher, who kept his Trident pin after President Trump intervened in his war crimes case, met with the commander in chief ahead of the Christmas holiday to “thank” him with a “little gift” from his service in Iraq.

“Finally got to thank the President and his amazing wife by giving them a little gift from Eddie’s deployment to Mosul,” Gallagher and his wife, Andrea, captioned a set of photos with Trump and the first lady at their Mar-a-Lago estate. The images were posted on Instagram Saturday.

In one of the images, Trump, standing beside Melania and Andrea, holds the present. Exactly what Gallagher gave the president wasn’t disclosed.

Chief Petty Officer Gallagher, a member of the elite Navy SEALS, was accused of war crimes and charged with multiple counts of murder, including shooting and killing an unarmed elderly man and a schoolgirl while deployed in Iraq and fatally stabbing a teenage ISIS fighter who was brought in for medical treatment. He allegedly posed for a picture with the prisoner’s body.

Gallagher was acquitted on all charges but was convicted of bringing discredit to the armed services by posing for a photo with a corpse.

Some Navy officials still sought to discipline him, including potentially stripping Gallagher of the Trident pin that signifies membership in the SEALs, but when he faced a demotion in rank, Trump intervened to reverse the decision and announced on Twitter he would not permit the Navy to take Gallagher’s pin.

Last month, Trump’s Navy secretary, Richard Spencer, was fired by Secretary of Defense Mark Esper for his objections to the president’s “unprecedented intervention.” Spencer pushed for a naval review board to consider Gallagher’s wartime actions. The Pentagon said Esper asked for Spencer’s resignation because of a “lack of candor.”

Gallagher, who had eight overseas deployments, including service in both the Iraq War and in Afghanistan, accused Spencer of "meddling in my case and trying to get organizations not to support me."

Spencer, in a final letter to Trump, said he no longer shared the “same understanding” of “good order and discipline” with the commander in chief.

Meanwhile, Trump defended Spencer’s ouster, saying, “I have to protect my warfighters.”

“I was not pleased with the way that Navy Seal Eddie Gallagher’s trial was handled by the Navy. He was treated very badly but, despite this, was completely exonerated on all major charges. I then restored Eddie’s rank,” Trump wrote on Twitter. “I thank Richard for his service & commitment. Eddie will retire peacefully with all of the honors that he has earned, including his Trident Pin.”

As planned, Gallagher retired on Nov. 30 after 20 years of service.