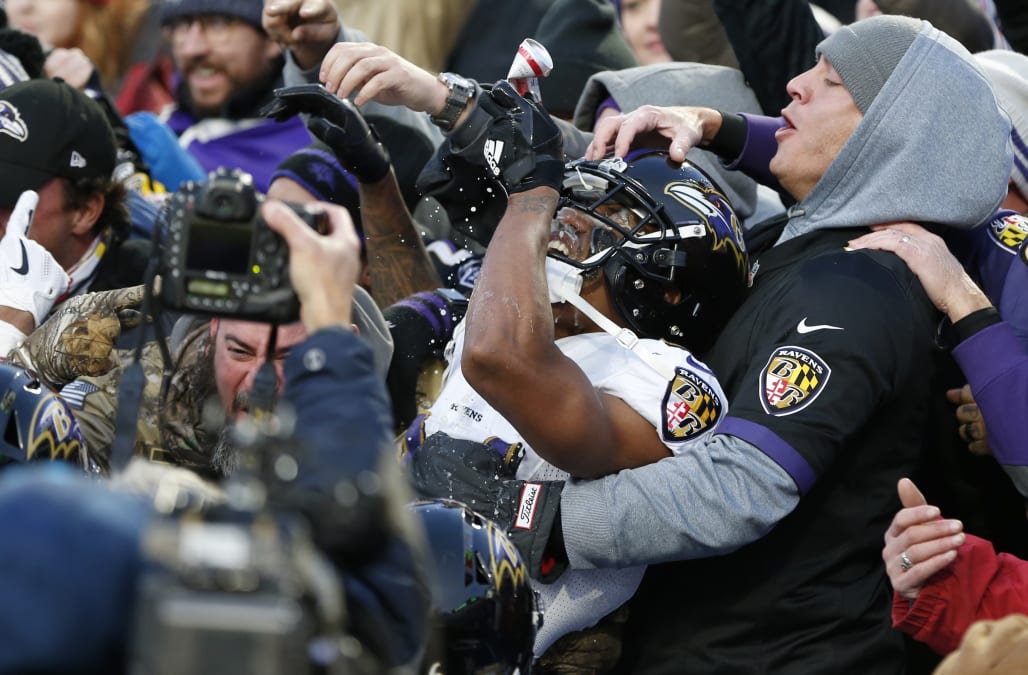 Toward the very end of the Dec. 8 game between the Baltimore Ravens and Buffalo Bills, on 4th & 8 with the Bills driving and down only 7 points, Ravens cornerback Marcus Peters broke up a Bills pass play to seal the Ravens win. To celebrate, he leapt into the stands where a bunch of Ravens fans were sitting, grabbed one fan’s beer, and poured it onto his face.

The NFL fined Peters $14,037. Peters barely got any beer in his mouth, but the NFL deemed it unsportsmanlike conduct to drink a beer during a game.

When news of the fine came out this week, Bud Light, the official beer sponsor of the NFL through 2022, tweeted, “Drinking a celebratory beer isn’t a crime.” The brand offered to match the fine with a donation to a charity of Peters’ choice.

Peters reached out two hours later and chose Providence Supportive Housing, which helps low-income elderly or disabled families in Peters’ hometown of Oakland, Calif. Bud Light tells Yahoo Finance that it made a donation in the amount of his fine.

Bud Light says this was the first time it offered to match a player’s penalty or fine with a charitable donation, though it has followed through on other social media promises, like giving free beer to Philadelphia Eagles fans thanks to a bet with Eagles tackle Lane Johnson.

Drinking a celebratory beer isn’t a crime. We’ll match that tab with a donation to a charity on your behalf @marcuspeters. DM us. https://t.co/Ctjthf9iEF

The incident, and Bud Light’s response, represents an interesting convergence of a few different things.

For staters, the beer Peters grabbed wasn’t a Bud Light, or even a beer owned by the same parent company, Anheuser-Busch InBev. It was a Molson Canadian, made by InBev competitor MolsonCoors.

“Bud Light folks seized the moment—swiped it from Molson really,” says Hartweg. “And drove a huge gain in social engagement.”

More interestingly, Bud Light’s tweet was a pretty clear criticism of the NFL—from one of its biggest sponsors. (AB InBev paid $1.4 billion in 2015 to extend its deal through 2022.) NFL sponsors typically hesitate to say anything remotely critical of the league.

Asked about that tension, Joe Barnes, sports marketing director at Bud Light would only say, “As the official beer of the NFL, Bud Light is always aiming to connect to authentic player and fan celebration moments, especially when it comes to beer. Despite the seriousness of the fine, we wanted to support and congratulate Marcus for a big moment in which he chose to drink a beer to celebrate.” The NFL declined to comment on the incident.

“Bud Light’s social team knows their boundaries with the good folks protecting the shield,” Hartweg of Team Marketing Report says. “Notice they didn’t say they would pay the fine for him, they offered to match it with a donation in his name... wisely not saying the NFL shouldn’t have fined him. They just slightly poke the NFL bear, and quickly step back.”

There isn’t much precedence of a player being fined for drinking during a game. The closest example was in November 2009, when Philadelphia Eagles tight end Brent Celek caught a touchdown pass from Donovan McNabb and struck the pose from a Captain Morgan ad campaign at the time (“There’s a little captain in everyone”). Captain Morgan had promised to donate $10,000 to charity every time a player was caught on camera doing the pose, but after Celek did it, the NFL banned the pose, since players cannot promote a product on the field. It did not fine Celek.

It’s difficult for consumer brands to achieve authenticity on social media—almost everything looks to these days like a prepped, manufactured promotion. But Bud Light managed to turn an NFL player fine into an organic win.

Jaguars owner Shad Khan on NBA in China: 'You have to respect the norms'

Jay-Z defends his NFL deal: 'I think we have moved past kneeling'