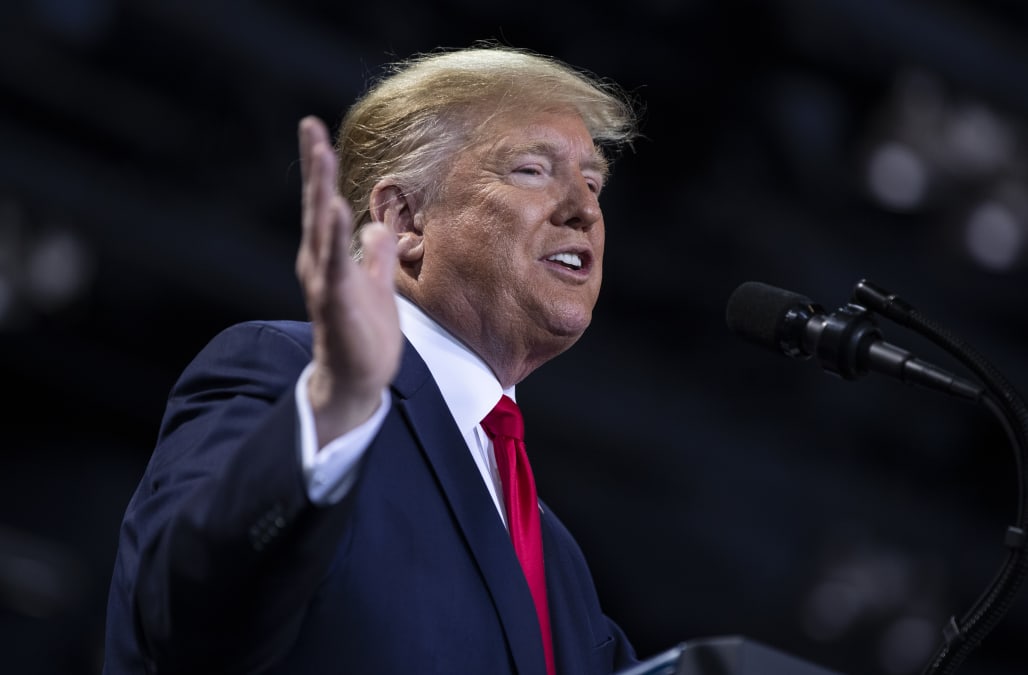 The White House on Thursday said President Trump was “just riffing” when he suggested at a Michigan rally that Democratic Rep. Debbie Dingell’s late husband, Rep. John Dingell, was in hell, “looking up.”

“It was a very, very supportive and wild crowd,” White House press secretary Stephanie Grisham said on ABC’s “Good Morning America.” “And he was just riffing on some of the things that had been happening the past few days.”

Grisham described Trump as a “counter-puncher.” During his campaign and since taking office, Trump has made many inflammatory statements that he or his press secretaries explained away as jokes.

John Dingell, the longest serving member of Congress in U.S. history, died in February at age 92.

At a rally in Battle Creek, Mich., on Wednesday night, Trump brought up the late congressman and his widow, who now holds his seat and voted, along with almost all the House Democrats, for impeachment.

“Debbie Dingell, that’s a real beauty,” Trump said, noting he was watching her on television during the impeachment proceedings.

The president said he gave the Dingell family the “A-plus treatment” after John Dingell’s death, falsely claiming he allowed him to lie in state in the Capitol Rotunda. Trump then depicted an emotional phone call with Debbie Dingell, with her thanking him for his consideration and telling him that her husband was “thrilled” looking down from heaven.

“Maybe he’s looking up,” Trump said, drawing some moans from the crowd in Michigan, a state Dingell represented for more than 59 years, although his district was in another part of the state.

“Mr. President, let’s set politics aside,” she tweeted. “My husband earned all his accolades after a lifetime of service. I’m preparing for the first holiday season without the man I love. You brought me down in a way you can never imagine and your hurtful words just made my healing much harder.”

In an interview with CNN, she maintained her above-the-fray stance.

“I’ve never taken a personal shot at this president. I think his family is off limits,” Debbie Dingell said.

She said John Dingell’s brother, her brother-in-law, is currently in hospice care.

“We need more civility in this country,” the congresswoman continued. “The rhetoric, the bullying, the viciousness isn’t OK. And there are too many people across the country that are beginning to think it is OK.”

Dingell’s Republican colleague, Rep. Fred Upton, was quick to criticize Trump’s remark and called on the president to apologize.

“I’ve always looked up to John Dingell,” Upton tweeted. “My good friend and a great Michigan legend. There was no need to ‘dis’ him in a crass political way. Most unfortunate and an apology is due.”

When asked if she wanted an apology from the president, Debbie Dingell demurred.