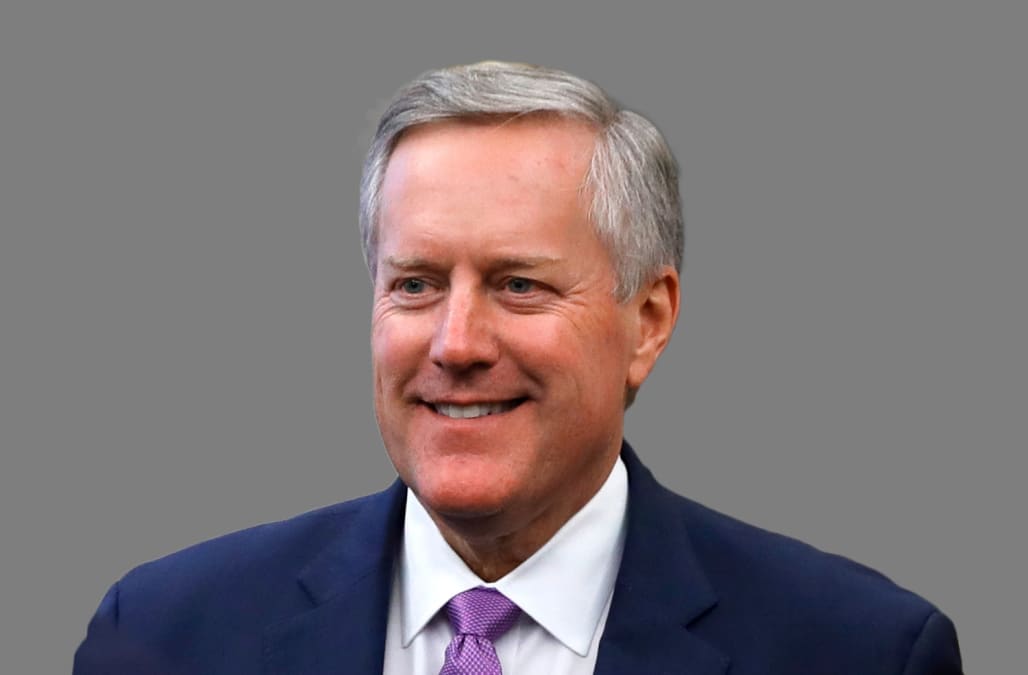 His announcement comes just a day after the U.S. House voted to impeach Trump on charges that he abused his power and obstructed Congress. In a statement, the North Carolina congressman said he struggled with the decision and came to it after discussion with his family.

“My work with President Trump and his administration is only beginning. This President has accomplished incredible results for the country in just three years, and I’m fully committed to staying in the fight with him and his team to build on those successes and deliver on his promises for the years to come," Meadows said in the statement. “I’ve always said Congress is a temporary job, but the fight to return Washington, DC to its rightful owner, We The People, has only just begun."

Meadows is a longtime leader of the House Freedom Caucus, which pushed hard-line conservative policies, often rebelling against House Republican leaders. Meadows is a staunch Trump loyalist and talks with him often.

Meadows' name has been floated inside the White House as a possible replacement for Acting White House Chief of Staff Mick Mulvaney.

Rep. Mark Meadows (R-NC)
WASHINGTON, DC - FEBRUARY 27: U.S. Rep. Mark Meadows (R-NC) speaks during a hearing as Michael Cohen, former attorney and fixer for President Donald Trump, testifies before the House Oversight Committee on Capitol Hill February 27, 2019 in Washington, DC. Last year Cohen was sentenced to three years in prison and ordered to pay a $50,000 fine for tax evasion, making false statements to a financial institution, unlawful excessive campaign contributions and lying to Congress as part of special counsel Robert Mueller's investigation into Russian meddling in the 2016 presidential elections. (Photo by Alex Wong/Getty Images)
Mark Meadows, congressional candidate from North Carolina speaks at the second session of the 2012 Republican National Convention at the Tampa Bay Times Forum in Tampa, Tuesday, August 28, 2012. (Harry E. Walker/MCT via Getty Images)
Rep. Mark Meadows, R-N.C, center, Rep. Tom Graves, R-Ga., right, and other conservative Republicans discuss their goal of obstructing the Affordable Care Act, popularly known as Obamacare, as part of a strategy to pass legislation to fund the government, on Capitol Hill in Washington, Thursday, Sept. 19, 2013. (AP Photo/J. Scott Applewhite)
Representative Mark Meadows, a Republican from North Carolina, listens as comments made by Representative Rashida Tlaib, a Democrat from Michigan, not pictured, are reviewed a House Oversight Comittee hearing with Michael Cohen, former personal lawyer to U.S. President Donald Trump, not pictured, in Washington, D.C., U.S., on Wednesday, Feb. 27, 2019. Cohen brought documents to Wednesday's congressional hearing to back up his case that his former boss is a 'con man' and 'a cheat.' Photographer: Al Drago/Bloomberg via Getty Images
Del. Eleanor Holmes Norton, D-D.C., left, and House Government Operations subcommittee Chairman Rep. Mark Meadows, R-N.C. talk on Capitol Hill in Washington, Thursday, May 12, 2016, prior to the subcommittee's hearing on whether the District of Columbia government truly has the power to spend local tax dollars without approval by Congress. (AP Photo/Andrew Harnik)
Representative Mark Meadows, a Republican from North Carolina, questions witnesses during a House Oversight and Government Reform Committee hearing in Washington, D.C., U.S., on Wednesday, Nov. 13, 2013. Republican lawmakers criticized potential security flaws in the U.S. health exchanges as Obama administration officials said they have made protecting customer privacy a top priority in their efforts to fix the website. Photographer: Pete Marovich/Bloomberg via Getty Images
FILE - In this Sept. 26, 2014 file photo, Rep. Mark Meadows, R-N.C. speaks in Washington. Sen. Ted Cruz’s rivals like to say he doesn't have any friends in Washington. Despite a distinct lack of support from Senate colleagues _ not one single endorsement, the Republican presidential candidate and freshman Texas senator has a small but loyal group of supporters in the House who are flying to rallies, meeting with voters and trying to convince the electorate that he's not such a bad guy. Meadows says he's traveled to Cruz events "to really tell the personal side of Ted Cruz that not many people know." (AP Photo/Manuel Balce Ceneta, File)
Republican House Oversight Committee and Government Reform Committee members, from left, Rep. Ron DeSantis, R-Fla., Rep. Mark Meadows, R-N.C., and Rep. Thomas Massie, R-Ky., listen on Capitol Hill in Washington, Thursday, July 7, 2016, as FBI Director James Comey, right, testifies before the committee's hearing to explain his agency's recommendation to not prosecute Democratic presidential candidate Hillary Clinton over her private email setup during her time as secretary of state. (AP Photo/J. Scott Applewhite)
House Oversight Committee member Rep. Mark Meadows, R-NC., returns to the closed hearing after speaking to members of the media about questioning of Justice Department official, Bruce G. Ohr, on Capitol Hill in Washington, Tuesday, Aug. 28, 2018. Ohr will be interviewed as part of an investigation into decisions made by the department in 2016. (AP Photo/Pablo Martinez Monsivais)
Rep. Mark Meadows, R-N.C., left, chairman of the conservative House Freedom Caucus, and Rep. Doug Collins, R-Ga., right, walk to a meeting of House Republicans as work in Congress resumes following the August recess, at the Capitol in Washington, Wednesday, Sept. 6, 2017. Meadows is opposed to suggestions by GOP leaders to connect the urgent Harvey aid bill to increasing the U.S. debt limit. (AP Photo/J. Scott Applewhite)
Rep. Mark Meadows, R-N.C., chairman of the conservative Freedom Caucus, speaks during a television news interview just before passage of the Republican tax reform bill in the House of Representatives, on Capitol Hill, in Washington, Tuesday, Dec. 19, 2017. (AP Photo/J. Scott Applewhite)
Rep. Mark Meadows, R-N.C., objects to House Oversight and Reform Committee Chair Elijah Cummings, D-Md., efforts to subpoena Trump administration officials over family separations at the southern border, on Capitol Hill in Washington, Tuesday, Feb. 26, 2019. The committee voted to subpoena Trump administration officials over family separations at the southern border, the first issued in the new Congress as Democrats have promised to hold the administration aggressively to count. The decision by the Oversight Committee will compel the heads of Justice, Homeland Security and Health and Human Services to deliver documents. (AP Photo/J. Scott Applewhite)
Up Next

In 2015, Meadows stunned his Republican colleagues by filing a motion to oust the powerful GOP House Speaker John Boehner, which eventually led to Boehner's resignation. At the time, the Freedom Caucus was a solid bloc of conservative lawmakers that wielded considerable clout in the House, often thwarting the GOP leadership.

But Meadows also drew attention for his friendship with progressive Democratic Rep. Elijah Cummings, who died earlier this year.

"There was no stronger advocate and no better friend than Elijah Cummings," Meadows tweeted after his death.

Meadows, 60, moved to the North Carolina mountains in the 1980s from Florida and opened a restaurant before getting a real-estate license to sell houses. He eventually became a real-estate developer and made millions of dollars before deciding to run in 2012 to replace a Democratic congressman who decided not to seek reelection. He won that year's Republican nomination after a bruising eight-way primary and won the general election before making a name for himself as a staunch conservative who opposed the policies of President Barack Obama.

Two other Republican incumbents in North Carolina recently announced they would not run again for Congress in 2020 — George Holding and Mark Walker — after their districts picked up many new Democratic voters when the legislature redrew all 13 U.S. House districts after judges ruled it was likely the previous map was tainted with extreme partisan bias favoring the GOP. Meadows' district had not been considered one that had shifted as much to the left as those other two.

Candidate filing ends Friday in North Carolina. Four Democrats and one Green Party candidate had filed for Meadows' seat as of Wednesday. The primary is March 3.