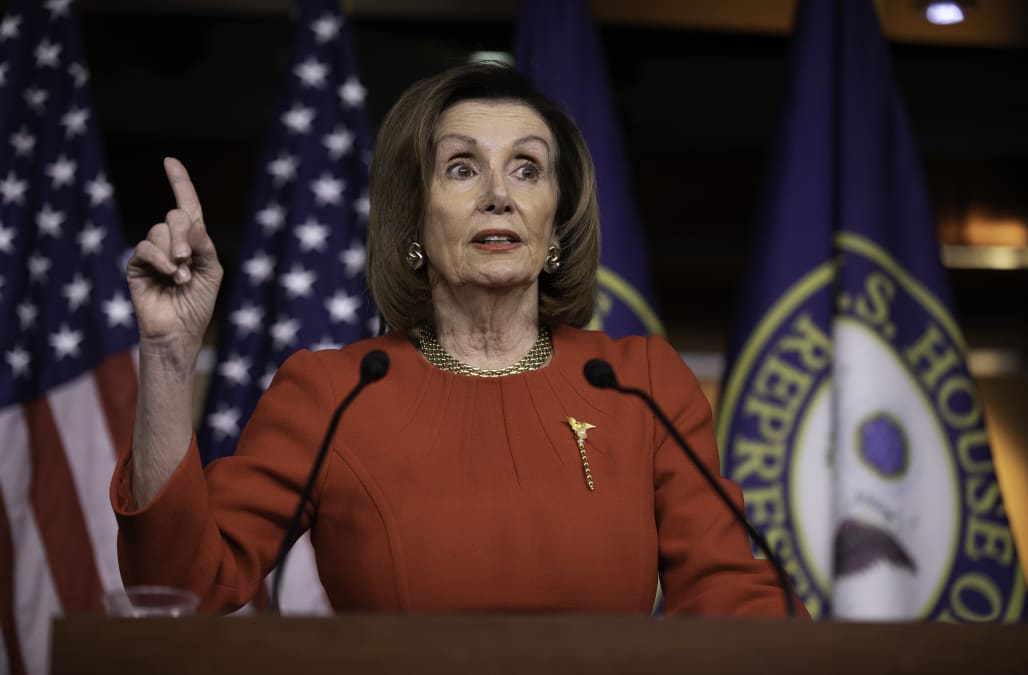 Democrats want to put pressure on individual Republican senators over the issue of calling witnesses in a Senate impeachment trial, and they are looking to create friction between President Trump and Senate Majority Leader Mitch McConnell.

But House Speaker Nancy Pelosi struggled Thursday to explain what, exactly, her plan is in delaying sending the articles of impeachment to the Senate. She refused to answer questions from reporters who wanted more clarity.

Pelosi said only that she is waiting for the Senate to agree on procedures for a trial, and only then will she send the articles over. She said she wants “a fair trial.”

That means she, like Senate Minority Leader Chuck Schumer, wants to be able to call witnesses in the Senate trial. McConnell, a Kentucky Republican, has said he wants to start the trial before deciding on witnesses, but has indicated he would likely try to preside over a speedy trial without any.

Pelosi claimed Thursday morning that she could not pick “managers” — the House members who will argue the case for impeachment before the Senate — until she knows the parameters of the trial. “When we see what they have, we’ll know who and how many we’ll send over,” she said.

But this plan to withhold the articles bubbled up from inside the Democratic conference just in the past few days, and was only discussed as a real possibility the day before the vote to impeach on Wednesday. It’s not clear how fully Pelosi had thought through her decision, or whether her announcement was a short-term play that she doesn’t think will have much political cost.

The president wants an acquittal, and has said publicly that he wants to have witnesses, while McConnell would probably like to avoid a trial altogether.

“Frankly, I’m not anxious to have a trial,” McConnell said to reporters in the Capitol Thursday.

Trump, meanwhile, spent the morning tweeting about how he wants Pelosi to send over the articles to the Senate, and has made it clear he looks forward to an acquittal there.

Democrats “want to Do Nothing with the Articles & not deliver them to the Senate, but it’s Senate’s call!” the president wrote.

Pelosi may want to use that potential friction between Trump and McConnell to create political pain for them, while forcing Republican senators to decide whether they really favor the calling of witnesses in the trial.

Sen. Chris Van Hollen, D-Md., a former Pelosi ally in the House, told Yahoo News in an interview Thursday morning that “this is an important moment to focus public attention on what the proceeding in the Senate will look like” and to make each Republican senator answer for his or her position, since questions of witnesses and procedure have to be approved by a majority of 51 senators.

“We need to have this very open discussion of what constitutes a fair trial,” Van Hollen said. “Members are going to be asked.”

Schumer echoed that point in a floor speech. “In the coming weeks Republican senators will face a choice, each Republican senator will face a choice. Do they want a fair trial? Or do they want to allow the president free rein?” Schumer said. “Each senator must ask him- or herself, do you want a fair trial? Or do you want the president to do whatever he wants regardless of rule of law?”

But some top Democrats lacked unity of message on Thursday morning. Van Hollen told Yahoo News that Pelosi should not withhold the articles indefinitely.

House Majority Leader Steny Hoyer said the same thing, but did not even sound certain as to what Pelosi was planning. “I hope it is not the case” that Pelosi never sends the articles over, he said on MSNBC’s “Morning Joe.”

But House Majority Whip James Clyburn had a different message, though he too said he had “no idea what the speaker will do.”

“Are you willing to hold the articles indefinitely if Mitch McConnell doesn’t concede the points that you’re asking him to? Are you suggesting it’s possible you will never transmit the articles of impeachment?” CNN’s John Berman asked Clyburn.

Pelosi herself did not definitively rule out the possibility that she might never send the articles to the Senate, though she indicated that she would when they agree on procedures.

McConnell expressed befuddlement at Pelosi’s strategy, a confusion shared by many in Washington.

“It’s beyond me how the speaker and Democratic leader in the Senate think withholding the articles of impeachment and not sending them over gives them leverage,” McConnell said. “If she thinks her case is so weak she doesn’t want to send it over, throw me into that briar patch.”

The answer to much of this will lie in how McConnell is able to manage his relationship with the president. If he can persuade Trump that there is no harm in waiting until early January to receive the articles from the House, and the Senate trial will go off as planned at that point — probably for two weeks and without witnesses — then Pelosi’s strategy could backfire on the Democrats, or amount to little.

But if Trump grows impatient and anxious that he might go down as an impeached president who is not acquitted by the Senate, that could create headaches for McConnell.

The 360:Is impeachment destined to 'die quickly' in the Senate?

More from Yahoo News:
Trump praises N.J. Democrat who is switching parties to vote against impeachment
Omar on Trump and her unapologetic support for Sanders