McConnell calls Pelosi 'too afraid' to give impeachment articles to Senate 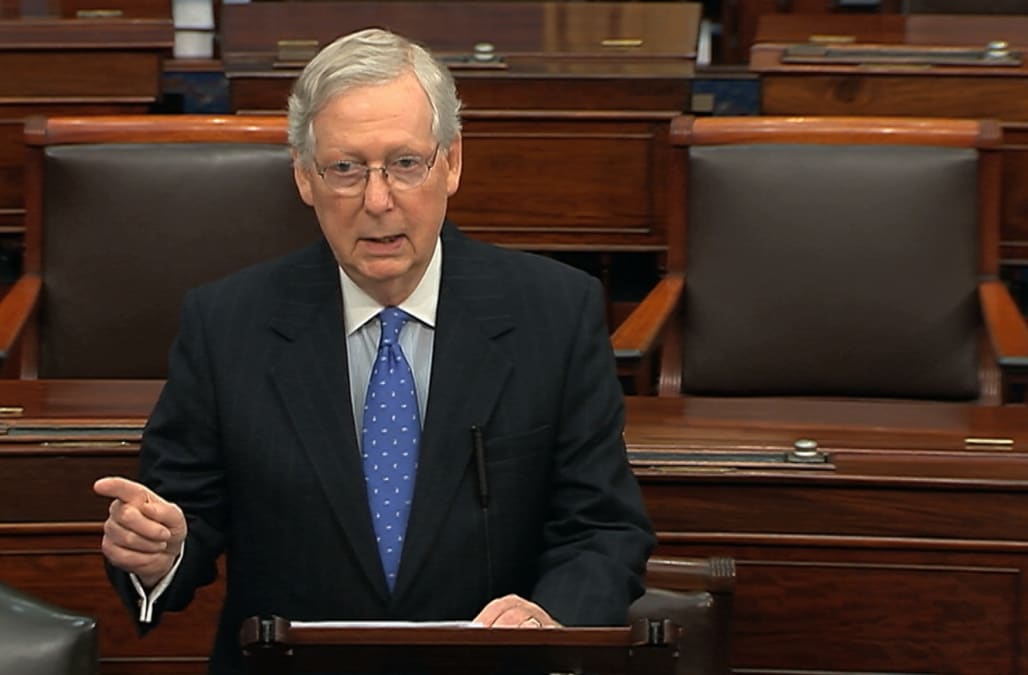 Senate Majority Leader Mitch McConnell, R-Ky., said Thursday that House Speaker Nancy Pelosi, D-Calif., "may be too afraid" to send the articles of impeachment to the Senate after the speaker suggested she won't submit them until she believes a fair trial will take place.

McConnell lambasted the impeachment from the Senate floor as "the most rushed, least thorough, and most unfair ... in modern history." He said Pelosi "gave in to a temptation" and that the House impeached Trump "simply because they disagree with a presidential act."

The two articles of impeachment approved by the House on Wednesday charge Trump with abuse of power and obstruction of Congress.

McConnell said those articles are "fundamentally unlike any articles that any prior House of Representatives has ever passed" and the idea Democrats will withhold the articles suggests "House Democrats may be too afraid to even transmit their shoddy work product to the Senate."

"Looks like the prosecutors are getting cold feet in front of the entire country and second-guessing whether they even want to go to trial," McConnell said, trashing the "comical" idea that Democrats will now "sit on their hands."

Such actions "concede that their own allegations are unproven," McConnell said, suggesting that "every future president" could now face impeachment, "free to swamp the Senate with trial after trial, no matter how baseless."

"The framers built the Senate to provide stability," McConnell said, adding, "To keep partisan passions from boiling over. The Senate exists for moments like this."

The first article charges Trump for pushing Ukraine to announce probes into former Vice President Joe Biden, his son Hunter Biden and Democrats at the same time he was withholding nearly $400 million in military aid and an official White House visit for Ukrainian President Volodymyr Zelenskiy. The second article charges Trump with obstructing the House's investigation into that conduct.

"If the Senate blesses this slapdash impeachment, if we say from now on this is enough, then we invite an endless parade of impeachment trials," he said.

Trump also expressed disdain over the idea that Democrats may not immediately submit the articles, tweeting on Thursday: "Now the Do Nothing Party want to Do Nothing with the Articles & not deliver them to the Senate, but it's Senate’s call!"

"The Senate shall set the time and place of the trial," he said. "If the Do Nothing Democrats decide, in their great wisdom, not to show up, they would lose by Default!"

The articles must be transmitted to the Senate before such a trial could begin.

Senate Minority Leader Chuck Schumer, D-N.Y., spoke on the Senate floor moments after McConnell, excoriating the top Republican for "proudly" saying he had "no intention to be impartial" in the trial. He said of his Senate counterpart's earlier evisceration of Democrats' impeachment push: "What hypocrisy."

"This from the man who proudly declared his number one goal was to make President Obama a one-term president," Schumer said, adding that McConnell proudly called himself the "grim-reaper" of legislation passed by the House.

"If the House case is so weak, why is Leader McConnell so afraid of witnesses and documents?" he added.

Pelosi on Wednesday excoriated McConnell for pledging "total coordination" with the White House for the coming Senate trial, which she compared to the foreman of a jury being in "cahoots" with the defendant's attorney.

"We're not sending (the articles) tonight because it's difficult to determine who the managers would be until we see the arena in which we will be participating," Pelosi said, adding, "So far, we haven't seen anything that looks fair to us, so hopefully it will be fairer, and when we see what that is, we'll send our managers."

Sen. Lindsey Graham, R-S.C., tweeted that such withholding of the articles of impeachment "would be a breathtaking violation of the Constitution, an act of political cowardice, and fundamentally unfair to" Trump.

"Not allowing the Senate to act on approved Articles of Impeachment becomes Constitutional extortion and creates chaos for the presidency," he continued.

House Judiciary Committee Chairman Jerrold Nadler, D-N.Y., told reporters Thursday that McConnell "has a problem" because he "said that he's going to work hand in glove with the White House."

Nadler added he believes McConnell "disqualified himself" as a result.