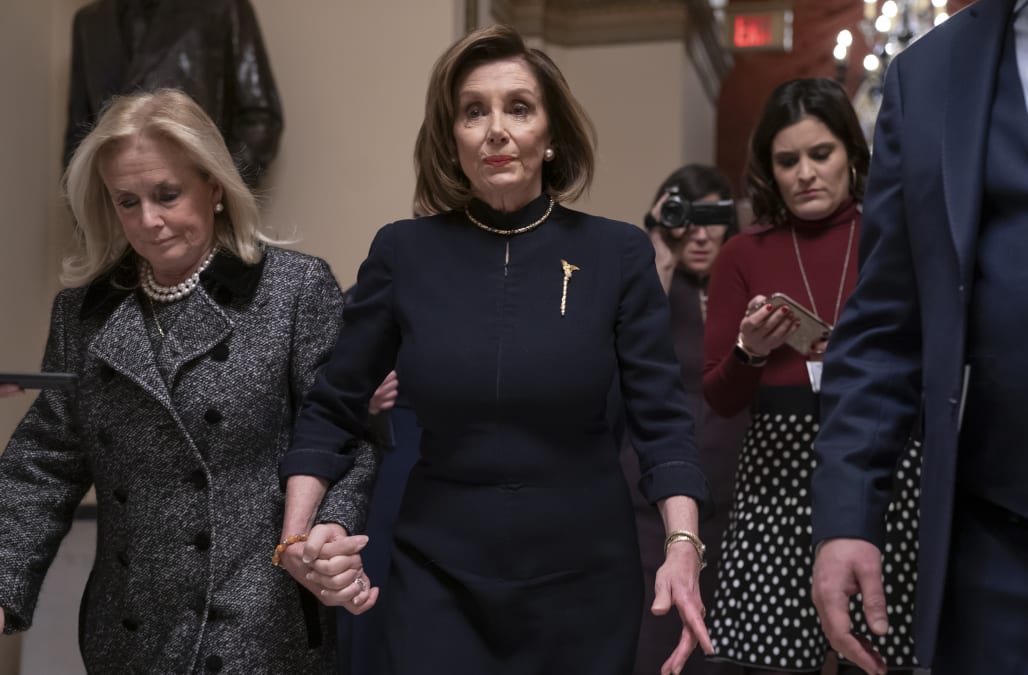 Quoting from the Pledge of Allegiance, George Washington and the late Democratic Rep. Elijah Cummings, House Speaker Nancy Pelosi on Wednesday delivered a short speech to open the debate on articles of impeachment against President Trump.

Calling impeachment “one of the most solemn powers” Congress can take, Pelosi said Trump’s dealings with Ukraine and his obstruction of the House probe had left members no choice but to act.

“If we do not act now we would be derelict in our duty,” Pelosi said. “It is tragic that the president’s reckless actions make impeachment necessary. He gave us no choice.”

“No member regardless of party or politics comes to Congress to impeach a president,” she said. “Every one of us stood on this historic house floor before our beautiful American flag and raised our hand in this sacred oath. ‘I do solemnly swear I will support and defend the Constitution of the United States against all enemies foreign and domestic, so help me god.’”

“For 230 years members have taken that sacred oath,” Pelosi continued. “That is why today as speaker of the House I solemnly and sadly open the debate on the impeachment of the president of the United States.”

Pelosi received a standing ovation from her Democratic colleagues at the end of her speech.

The ranking Republican member of the Judiciary Committee, Rep. Doug Collins (R- Ga.) derided the idea that the session was “a solemn occasion” in his opening remarks.

“When you go looking for something for three years, especially this year since January, you ought to be excited when you found it,” he said. “Why do you call this a solemn occasion when you’ve been wanting to do this ever since [President Trump] was elected?”

The House was scheduled to vote on two charges against Trump — abuse of power and obstruction of Congress — over his requests for Ukraine to investigate former Vice President Joe Biden and the White House’s refusal to cooperate with a congressional investigation into the matter. If they pass, as expected, Trump will become the third president in U.S. history to be impeached.

Pelosi’s remarks also came after Trump sent her a 6-page letter ranting about his likely impeachment, accusing Democrats of “declaring open war on American Democracy,” among other things.

She did not mention the letter in her remarks.

“It is a matter of fact that the president is an ongoing threat to our national security,” Pelosi said.

“We in Congress must make clear that this body still stands in the Constitution and defends it,” she added. “Today we are here to defend democracy.”