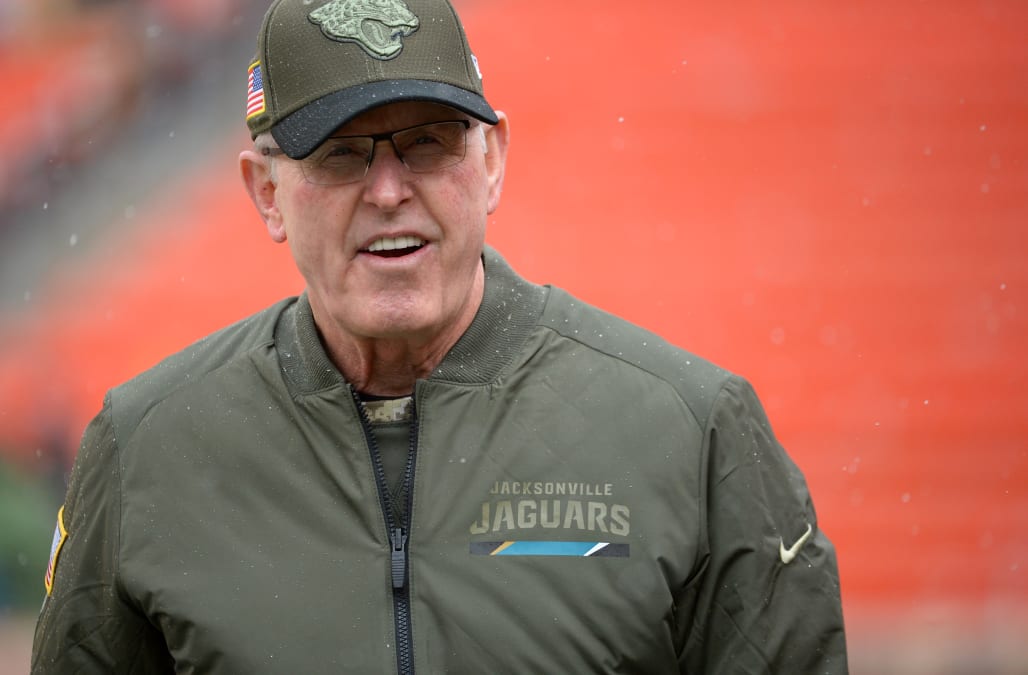 The Jacksonville Jaguars have announced the firing of executive vice president Tom Coughlin, just two days after the NFL Players Association went public with a breathtaking number of grievances filed against the team’s front office since the former coach’s hiring.

Jaguars owner Shad Khan explained the decision Wednesday, claiming that he had been planning to part ways with Coughlin after the season, but reconsidered and decided to make the change immediately. Given what the NFLPA was claiming, it’s hard to blame him for changing the timeline.

In its letter, the NFLPA detailed a combative relationship with Coughlin’s front office over the Jaguars’ insistence, to the point of $700,000 in fines against former Jaguars defensive end Dante Fowler Jr., that injured players rehab with the team during the offseason. That was a clear violation of the league’s collective bargaining agreement.

The conduct of Coughlin’s front office was reportedly so toxic that more than 25 percent of player grievances filed in the past two years have been against the Jaguars.

The letter finished with an ominous warning: “You as players may want to consider this when you have a chance to select your next club.” Essentially, the players union was warning players against signing with a specific organization, a move rarely seen in today’s game.

Coughlin has gained a reputation over the years as one of the NFL’s harshest taskmasters, and it appeared that his desire to control players was great enough to ignore their CBA-backed rights. That approach predictably made him unpopular in the Jacksonville locker room, to the point that Fowler and former Jaguars star cornerback Jalen Ramsey took victory laps on Twitter after the NFLPA went public with Coughlin’s conduct.

When Coughlin’s firing was announced, Ramsey couldn’t resist sending out another barb.

Jaguars had their on-field struggles too

While the move to fire Coughlin Wednesday was sparked by the NFLPA’s letter, there were plenty more reasons to let the executive go. First and foremost was the Jaguars’ 10-20 record since reaching the 2017-18 AFC championship game.

After leading the NFL in DVOA in 2017, the Jaguars defense currently ranks 29th this season after losing several major contributors. Ramsey forced a trade to the Los Angeles Rams after a public spat with Coughlin over voluntary workouts (Coughlin unsurprisingly treated them as mandatory). Fowler was also traded to the Rams. Pro Bowl linebacker Telvin Smith retired, though there could be more to that story.

On offense, Coughlin did his damage by giving Blake Bortles and Nick Foles, two quarterbacks who are not currently starting for the Jaguars or any other NFL team, a combined $75 million in guaranteed money.

Will Coughlin ever get another job?

Coughlin is now 73 years old and was unpopular enough on his last team that the NFLPA felt the need to swing its full might against his tenure.

Any team that wants him to bring him on in any kind of executive role is going to have to publicly explain the decision, and any player on that team would have the upper hand if he went public with a grievance.

If this is it for Coughlin in the NFL, he’ll at least be able to see his career came full circle in Jacksonville. He got his first NFL head coaching job with the Jaguars in their inaugural 1995 season, then won two Super Bowls with the New York Giants. He came back to the Jaguars in 2017, and has now been fired within three years.

Coughlin has long been perceived as one of the most prominent followers of the NFL’s old school when it comes to treating players. With this latest episode, it might be time for that school to close its doors.