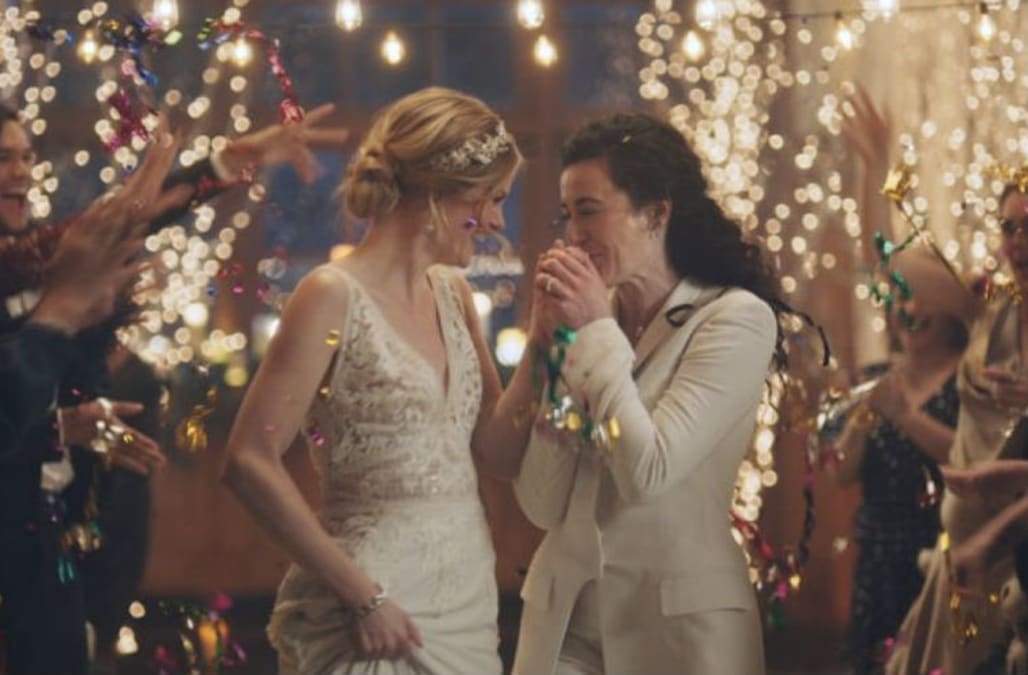 The Hallmark Channel has reversed its decision to pull an ad for the wedding registry site Zola because it featured two brides kissing at their wedding. The about-face now has some conservatives, who had originally called for the commercials to be removed, venting on social media.

In a statement issued Sunday, Hallmark CEO Mike Perry apologized for causing “hurt and disappointment” with the network’s initial decision to pull the Zola ad following complaints and threats to boycott from One Million Moms, a conservative Christian group that’s part of the American Family Association. A Hallmark spokesperson told the New York Times that the brides’ kiss violated its policies, while an account representative for its parent company, Crown Media, told the paper that the channel did not run ads “that are deemed controversial.”

“One Million Moms urges the Hallmark Channel to return to the family-friendly content it has always been known for,” the group noted on its website on Friday, ahead of the ban. “The issue of same-sex relationships should be left for families to talk through together according to their faith and personal beliefs, rather than be forced to address this complex matter during family movies.”

But pulling the Zola ad fueled even more controversy and outcry from the public, including gay celebrities such as Ellen DeGeneres and country singer Chely Wright. The backlash prompted Perry to release a mea culpa and announce the channel’s plans to “reinstate the commercials” while working with GLAAD to “better represent the LGBTQ community.”

Hallmark will be working with GLAAD to better represent the LGBTQ community across our portfolio of brands. The Hallmark Channel will be reaching out to Zola to reestablish our partnership and reinstate the commercials. pic.twitter.com/p17nJpnjEB

While GLAAD, the Human Rights Campaign and other LGBTQ allies are celebrating the reversal, some conservatives are renewing their vows to protest the ads and potentially the channel as a whole. Franklin Graham, son of the late preacher Billy Graham and a Christian evangelist known for his attacks on homosexuality, said he would “change the channel” and claimed “the LGBTQ agenda” had bullied the “wholesome” network.

We can change the channel. That’s what I’ll do if I’m watching @HallmarkChannel & an ad w/gay people kissing comes on. My family—& many, many others—have appreciated their wholesome content. But the LGBTQ agenda bullies everybody—including them. https://t.co/gvpu80anj1

The left doesn’t like other people playing the game *they created.*

I have no issues however, this is the Hallmark channel w/family programming for family of all ages & I don't want to explain to my 3 yr old cousin why they're kissing. Do this on LMN, but not Hallmark. You said your channel stood for American values - these aren't them.

Hallmark used to represent family values- family is a group consisting of parents and children living together in a household. Parents are a mother and a father, so no more family values from Hallmark!

Critics on the opposite side of the political spectrum, meanwhile, aren’t so quick to accept Hallmark’s apology, and remain upset over the Zola ad being yanked in the first place. It’s a situation that has now alienated two demographics, and one that media crisis expert Eric Schiffer, chairman of Reputation Management Consultants, says could have been avoided had the network better identified its values.

“In today’s environment, brands are required to be crystal-clear about their principles and values, and to align with them in the decision-making that they do,” Schiffer tells Yahoo Lifestyle. “One aspect of that requires them to understand their core demographic. In this case, Hallmark hadn’t done the homework. They hadn’t considered how this would alienate the LGBTQ community, and then reversed. They never really thought through their values ... You must be clear about what you stand for, and then these kinds of decisions are very easy.”

Schiffer adds that the channel may be in a “crisis of choice” over which values and demographic it prioritizes, resulting in flip-flopping that has hurt its brand.

“Otherwise you’re just putting a patch on this,” he says.

More from Yahoo News:
What Bloomberg's $117 million spending spree has bought him so far. (Hint: Not much.)
Number of Trump's 'false or misleading claims' rose dramatically in 2019
Carly Fiorina: Impeaching Trump is 'vital'