The Giants gave Eli Manning the home farewell he deserves 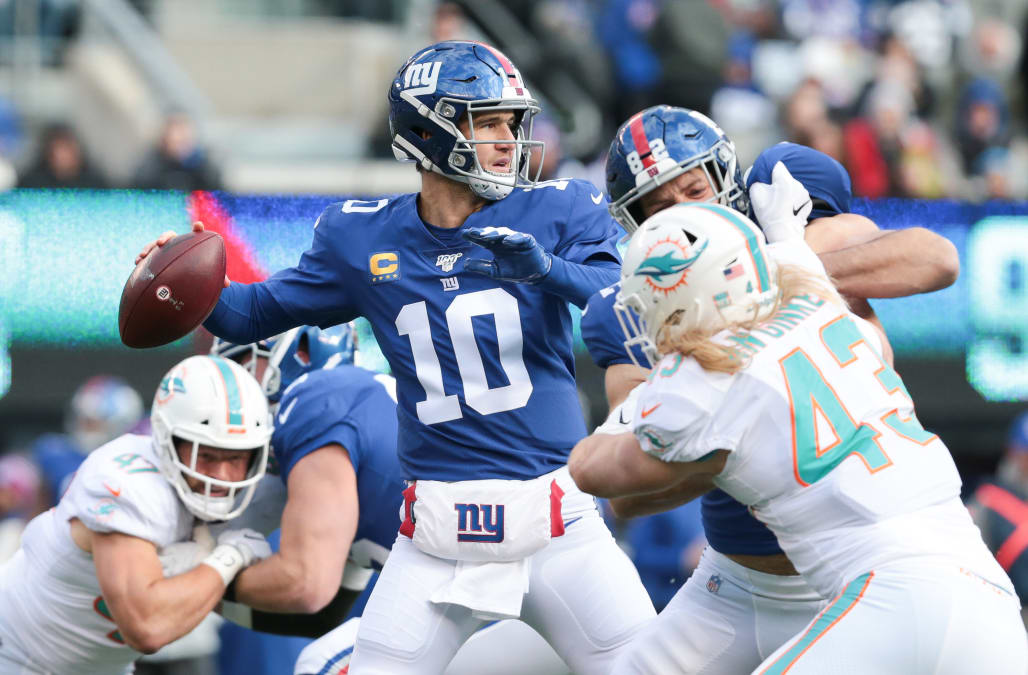 Surrounded by cameras, serenaded by cheers, No. 10 jogged off the field, perhaps for the last time.

Eli Manning waved to the MetLife Stadium crowd as his mother, Olivia, waved back from her perch inside a luxury suite, alongside her husband Archie and other members of the Manning clan. Together, the couple watched from on high as their youngest son said his final goodbyes to the fans before being greeted in the stadium tunnel by more familiar faces. Manning leaned in and kissed his wife, Abby, before taking turns hugging and holding their three daughters and infant son.

It was a family affair from start to finish and a fitting ending for one of the most important figures in Giants' history. And the disappointment of a 3-11 season couldn't put a damper on Manning's unofficial exit.

All that mattered to the veteran quarterback was the chance to lead his longtime team to one more victory. And all his teammates cared about was helping him go out on top.

"Saquon [Barkley] and I looked at each other right when we were going out for the first series and we said let's send him out on the right note, do everything in our power," receiver Sterling Shepard said after the Giants' 36-20drubbing of the Miami Dolphins.

Technically, there's a chance this isn't the last start of Manning's career. There still are two games left on the schedule: at Washington and the Giants' season finale at home against Philadelphia. But the gametime status of the two-time Super Bowl champion depends on the health of Daniel Jones, the new face of the franchise who's currently sidelined by an ankle injury.

Asked if he wants to start next week, Manning predictably said: "Of course I'd like to. I know Daniel is getting close. I get it either way."

Whether Jones starts against the Redskins is somewhat immaterial in the grand scheme of things. Manning's time in New York is coming to a close and, as a result, Sunday became his unofficial swan song.

But if this was, actually, it — Manning's last stand in a Giants uniform — it will go down as one of the Eli-iest.

His final stat line (20 for 28 for 283 yards, two touchdowns and three interceptions) told a familiar story. Manning was good, but definitely not great. But even so, for every errant throw, there was a dime dropped directly into the arms of a receiver. There were moments where he looked like the Manning of old, the same savvy veteran who twice earned Super Bowl MVP honors. And then there were flashes of the regression that helped paved the way for Jones to prematurely supplant him as the Giants' starter in Week 3.

The victory over Miami also improved Manning's career record to 117-117 — a fitting .500 success rate for the polarizing future Hall of Famer. But in the end, all that mattered in the locker room was that Manning had guided the Giants to a victory for their first since Week 4 and helped them snap their franchise-record losing streak at nine games.

The Giants' typically listless offense awakened at just the right time. Barkley returned to form, rushing for over 100 yards for the first time since Week 2, while Shepard rebounded from an early drop to haul in nine catches on 11 targets for 111 yards. The Giants' depleted defense also came alive, sacking 37-year-old journeyman Ryan Fitzpatrick three times and limiting the Dolphins (3-11) to 10 points over the final two quarters.

They did it for him, they said.

They did it for his 16 seasons and two Lombardi trophies.

They did it for the yellow "C" he proudly wears on his chest.

They did it for the leader he has always been, both on the field and behind the scenes.

"…We put so much into this game, but for him, the storm he's been through in his career, the ups and downs. …We just wanted to come out here and get the win for him."

The ovations for Manning began before the game even started.

The crowd rose to its feet and chanted, "Eli Manning! Eli Manning!” as the Giants offense took the field pregame. And with 1:50 remaining in the game, Giants head coach Pat Shurmur substituted backup quarterback Alex Tanney in the game, allowing for another Manning ovation.

"I just felt like it was the right thing to do," Shurmur said of the curtain call.

As Manning walked to the sideline, he was greeted by handshakes and high-fives from his teammates. His eyes welled with tears as he scanned the crowd and a chorus of "Eli Manning" chants rained down from the stands.

Said Shepard: "David Tyree and I were talking about it on the sideline. He was saying Eli has a piece of all of us and it's just a special day. We were able to get this win for him and send him out on the right note and it's a blessing."

Even Giants CEO John Mara was teary-eyed in the aftermath of the win and the crowd's reaction to what very well could be Manning's final game.

"He's a class act all the way, on and off the field," Mara told reporters as he held back tears. "It's very emotional. It was just nice to see him smile in the locker room."