The biggest sports controversies of 2019 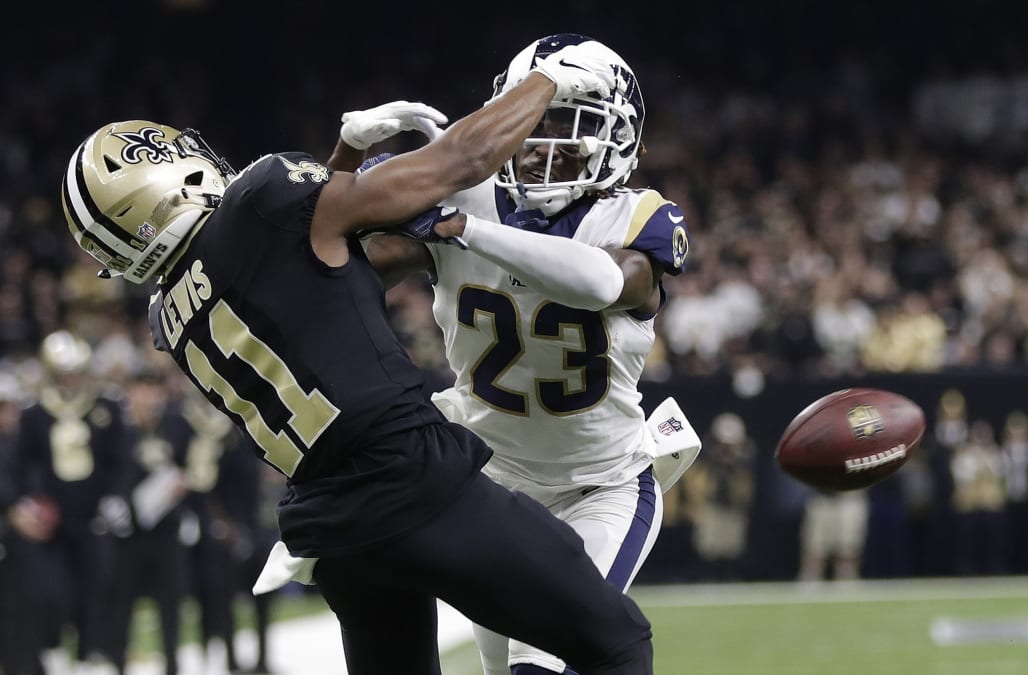 A lot can happen in one year. The sports world moves quickly, and it can be easy to lose track of the biggest stories as time goes on.

We took a look back at the most controversial sports stories of the year, with stories ranging from the politics surrounding sports to off-the-field conflicts, to literal on-field fights. Often times, the biggest sports stories have a way of bleeding beyond the games and into everyday culture.

Take a look back at the biggest stories from 2019.

The biggest sports controversies of 2019

What happened: Late in the fourth quarter of the NFC Championship, with the game tied at 20, Rams cornerback Nickell Robey-Coleman committed an obvious pass interference play when he hit Saints receiver Tommylee Lewis as Lewis went up for a catch. The penalty was never called, and it resulted in 4th-and-10. The Saints kicked a field goal to go up three. If the penalty had been called, it would have been 1st-and-10, giving the Saints a great chance to score a touchdown. Instead, the Rams kicked a game-tying field goal, won in overtime, and went to the Super Bowl. The NFL later admitted it should have been a penalty, leading to revised pass interference rules that have only created more confusion.

Read more: Saints lose to Rams in NFC Championship after one of the worst missed calls you'll see on a huge fourth-quarter play

What happened: The Clemson football team was set to visit the White House after winning the college football championship. However, the government shutdown meant the White House could not prepare a meal for the Tigers. Instead, they served a smorgasbord of fast food, including chicken sandwiches and burgers from Wendy's, McDonald's, and Burger King.

"I had a choice," Trump told the team during dinner. "Do we have no food for you? Because we have a shutdown. Or do we give you some little, quick salads that the first lady will make? ... I said, 'you guys aren't into salads.'"

What happened: In March, 28 members of the U.S. Women's National Team filed a gender discrimination lawsuit, alleging that "institutionalized gender discrimination" was affecting their pay, travel, playing schedule, training, medical treatment, and more. The lawsuit is ongoing, with the USWNT gaining more support after winning the 2019 FIFA World Cup.

What happened: Robert Kraft was charged with paying for sexual services at Orchids of Asia Day Spa in Jupiter, Florida, in March. The chargers were related to a months-long investigation by police into human trafficking. Kraft pleaded not guilty and turned down a plea deal offer from prosecutors. Video of the alleged sexual acts has been blocked.

What happened: In the first quarter of a high-profile game between Duke and UNC, Duke star Zion Williamson slipped and ripped through his shoe. Williamson hurt his knee in the process and had to leave the game. The incident not only put a spotlight on Nike and the quality of its shoes, but it also drove a debate about whether Williamson should play again, risking millions by getting hurt before the NBA draft. Williamson returned after missing five games.

What happened: Just two weeks before the NBA's February 7 trade deadline, Davis requested a trade from the Pelicans as the team continued to flounder. While trade requests aren't unusual, Davis was criticized for asking with over two seasons still left on his contract. The request essentially tanked the Pelicans and Los Angeles Lakers' seasons, as both teams were involved in high-level trade talks involving numerous players. It also created an awkward rift between the league and the Pelicans, as the Pelicans were incentivized not to play Davis, due to the NBA draft lottery odds, but the league said the team could not rest a healthy player. Davis was traded to the Lakers in June.

Read more: The aftermath of the Anthony Davis trade saga has turned ugly for the Lakers and the Pelicans

(Photo by Tom Pennington/Getty Images)
Magic Johnson suddenly retires as Lakers president on the last game of the season.


What happened: After a turbulent year, on the last game of the regular season, Magic Johnson gathered reporters and told them he was retiring as president of the Lakers. Johnson admitted he had not told Lakers owner Jeannie Buss of his plans and expressed his unhappiness in holding the position, saying he wanted to freely talk about and work with other players without violating NBA tampering rules. Weeks later, he would go on ESPN and criticize many members of the franchise, including GM Rob Pelinka.

What happened: The U.S. Women's National Team kicked off the World Cup with a bang, beating Thailand, 13-0. After the game, some in the soccer world were critical of Team USA, saying they ran up the score and celebrated too much. Some said the victory would put a target on their backs. USWNT, for their part, pushed back against the criticism and went on to celebrate in mocking fashion in future matches.

Read more: Critics are slamming the US Women's National Soccer Team for celebrating their landslide 13-0 defeat of Thailand — but others have defended the team and say the backlash is sexist


What happened: During the World Cup, Megan Rapinoe said she would not go to the White House if the US won the tournament. Trump responded by saying the team should win before making such comments. The exchange only shined a brighter spotlight on what had been a controversial World Cup run and an ongoing issue — athletes choosing to attend or not attend celebrations at the White House. USWNT has not visited the White House since winning the World Cup.

What happened: During a preseason game, just weeks before the regular season kick-off, Luck shockingly retired from the NFL at 29. Luck had been battling a leg injury throughout training camp and was said to be "mentally worn down" from injury rehab. Colts fans booed Luck on the field as the news came out. He gave an emotional press conference afterward and has stayed out of the public eye since the announcement.

Read more: Andrew Luck is retiring from the NFL at age 29 because he is 'mentally worn down'

What happened: Antonio Brown was traded from the Steelers to the Raiders in March. He never suited up for Oakland. Brown first hurt his feet in a cryotherapy chamber, then refused to take the field over a helmet dispute with the NFL during training camp. He then demanded a release from the Raiders in a wild weekend that ended with the Raiders cutting him. Hours later, he signed with the New England Patriots. Brown played one game with the Patriots. He was accused of rape in a lawsuit in September, then appeared to try to intimidate another woman who accused him of sexual misconduct in a separate incident. The Patriots cut Brown, and he remains unsigned.

Read more: Antonio Brown has been released by the New England Patriots – Here is a timeline of his bizarre year since leaving the Steelers.

What happened: MLB teams are hitting home runs at historic rates, with teams continuing to break home run records year after year. The spike in home runs has led to pitchers, fans, and media alike suggesting the baseballs have been designed to encourage more hits. The theory has gained legs, as MLB has a stake in Rawlings, the baseball manufacturer and MLB Commissioner Rob Manfred has said fans prefer offense and runs in baseball. Interestingly, home runs then fell in the postseason, leading some to wonder if the balls were switched out.

The NBA has an international crisis with China over Daryl Morey's tweet.

What happened: In October, Houston Rockets GM Daryl Morey tweeted a message of support for Hong Kong protesters. The tweet inspired an immediate backlash from mainland China, as Chinese sponsors immediately dumped the Rockets and NBA. The NBA was criticized by politicians, media, and fans, for appearing to try to appease China afterward by condemning Morey's issue. They later revised their statement and stood by Morey. The timing made things worse, as the NBA was traveling to China to play preseason games. The effects of losing such a large market are still be determined.

Read more: An NBA executive is facing major backlash in China after tweeting support for the Hong Kong protests

(Photo by ANTHONY WALLACE/AFP via Getty Images)
The Astros are caught up in an alleged cheating scandal from 2017.


What happened: In November, a report from The Athletic detailed a system the Houston Astros allegedly used in 2017 to steal signs. The Astros reportedly had a camera in the outfield that led to a TV near the dugout. Coaches and players would look for signs, then hit a garbage can to tip batters to oncoming off-speed pitches. Former Astros pitcher Mike Fiers confirmed the existence of the system. MLB is investigating.

Read more: Former Astros pitcher says the team stole signs using an outfield camera and went 'above and beyond' to gain advantages in a new report

(Photo by Alex Trautwig/MLB via Getty Images)
Myles Garrett swings a helmet at Mason Rudolph in an ugly NFL fight.

What happened: Late in the fourth quarter of a Week 11 game, a fight broke out between the Pittsburgh Steelers and Cleveland Browns. After Steelers quarterback Mason Rudolph charged Myles Garrett, Garrett ripped off Rudolph's helmet and swung it, hitting Rudolph in the head in a dangerous act. Three players were suspended, Garrett indefinitely, and several others, including Rudolph, were fined. Garrett alleged that Rudolph called him a racial slur, though Rudolph denied it, and the NFL said they had no evidence of any slur being used.

Read more: The NFL has never seen anything like the ugly fight between the Browns and the Steelers, and blame is flying in all directions

What happened: In November, the NFL announced it would be holding a workout for Colin Kaepernick for all 32 teams to attend. Kaepernick had reportedly been drawing interest from teams but they had been hesitant to sign him. The workout came together quickly, but on the day of, Kaepernick and his team backed out and moved the workout to a different location. The league and Kaepernick battled over waiver language, media access to the workout, and more. Weeks later, Kaepernick, after having thrown in front of eight teams, remains un-signed, with no end in sight.

(Photo by Carmen Mandato/Getty Images)
Up Next