The 17 most memorable college basketball players of the decade 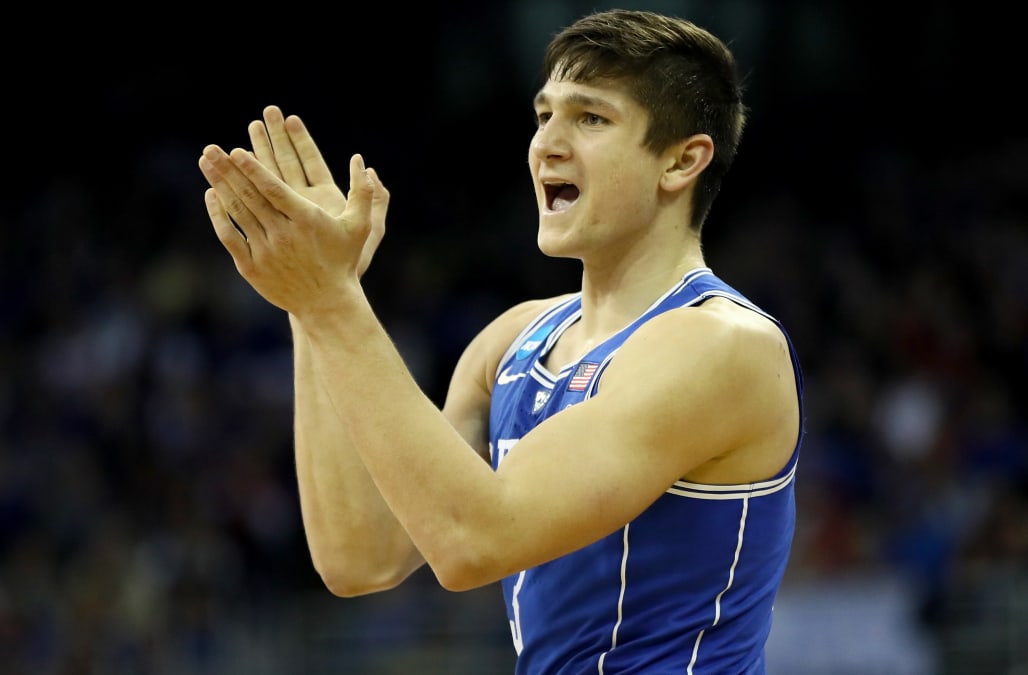 The most memorable college basketball players of the decade
Shabazz Napier

Though his stats may not compare to some of the one-and-done players on this list, Shabazz Napier had one of the most well-rounded four-year collegiate careers of any player this decade. He spent his first year in Storrs, Connecticut, lining up behind UConn legend and future NBA star Kemba Walker during their 2011 national championship run before taking over ball-handling responsibilities for the Huskies. By his senior season, Napier averaged a cool 18.0 points, 5.9 rebounds, and 4.9 assists per game, good enough to lead UConn to its second national championship in four years and earn him AAC Player of the Year accolades.

College basketball had never seen a scorer like Trae Young before his arrival in Norman, Oklahoma. The 6-foot-2 freshman torched every opponent he faced in his lone season as a Sooner, sinking long-range shots, dishing flashy dimes, and eliciting comparisons to two-time NBA MVP Stephen Curry. Young became the first player in Division I history to lead the nation in both scoring (27.4) and assists (8.7) since assists were made an official statistic in 1983.

Sabrina Ionescu is the all-time career triple-doubles leader in NCAA history, a feat she managed to achieve less than two years into her career with the Oregon Ducks. Though Ionescu is still in the midst of her senior season at Oregon, she has tacked on an additional seven triple-doubles since matching the previous record 12 triple-doubles two years ago. She won the John R. Wooden award alongside Duke's Zion Williamson in 2019, and even though she likely would have been the top pick in the subsequent WNBA draft, she chose to return to Oregon in pursuit of a national championship.

One of the best to ever suit up for Mike Izzo's Spartans, Denzel Valentine was a brilliant four-year player in Lansing. The 6-foot-6 shooting guard progressed from a 5.0 point, 4.1 rebound-per-game contributor off the bench during his freshman season to racking up in an impressive, 19.2 points, 7.5 rebounds, and 7.9 assists per game as a senior. In his tenure at Michigan State, Valentine appeared in three Sweet Sixteens, two Elite Eights, and a Final Four and earned many publications' Player of the Year awards in 2016.

Before Anthony Davis became one of the brightest stars in the NBA, he was one of the greatest one-and-dones in the history of college basketball. The 6-foot-10 forward dominated the paint for John Calipari's Kentucky Wildcats. Alongside six fellow future NBA players, Davis averaged a double-double. He led Kentucky to its first national championship in more than a decade, pulling down a whopping 16 rebounds in the title game against Kansas. He became the first freshman to win the Naismith Player of the Year and John R. Wooden awards since Kevin Durant won both in 2007.

Doug McDermott shined in his four years at Creighton. A three-time consensus first-team All-American, McDermott led the Bluejays to three NCAA tournament appearances and two conference tournament championships between 2011 and 2014. In his senior season, the Grand Forks, North Dakota, native led the nation with 26.7 points per game en route to winning Naismith College Player of the Year honors and the John R. Wooden Award. For both his junior and senior seasons, McDermott came fewer than five free-throw shooting percentage points away from joining the 50-40-90 club.

One of the most consistently prolific scorers in college basketball history, Kelsey Plum arrived at Washington and poured in 20.9 points per game in her first season with the Huskies. Her output only increased from there, peaking at a whopping 31.6 points per game during her senior year. She finished her career with 3,527 total points, more than any other player besides LSU's Pete Maravich, who left college in 1970. She also broke the women's single-season NCAA scoring record with 1,109 points during her senior season en route to being tabbed AP player of the year.

In each of the four seasons Jimmer Fredette spent at Brigham Young, he improved his point totals by at least five points. The 6-foot-2 guard was a walking bucket with an incredibly impressive range and ability to hit virtually any shot off the dribble. By his senior year, Fredette averaged a whopping 28.9 points per game — more than any other player in Division I — and led the Cougars to their first Sweet Sixteen appearance in 30 years en route to earning Naismith College Player of the Year and John R. Wooden Award honors.

Despite playing with a revolving door of teammates in his four years in Lawrence, Frank Mason III thrived as a point guard for Bill Self's Jayhawks. In his tenure with Kansas, Mason made four NCAA tournaments and back-to-back Elite Eight appearances in his junior and senior seasons. By his senior year, Mason averaged 20.9 points, 4.2 rebounds, and 5.2 assists per game while shooting 49% from the field and 47.1% from beyond the arc. Like many other players on this list, he won both the Naismith Player of the Year and John R. Wooden awards in his senior season.

Jalen Brunson led the Wildcats to two Big East regular-season championships, two Big East tournament championships, and two national championships in his three years at Villanova. In that time, the 6-foot-3 point guard improved from contributing 9.6 points per game to pouring in a team-high 18.9 per contest and, in his senior season, earned Naismith College Player of the Year and John R. Wooden Award accolades.

Four years, four national championships. That's the legacy of Breanna Stewart, arguably the most decorated and accomplished college basketball player to ever step on the court. During her first year at UConn, the 6-foot-4 forward led the Huskies to a national championship and became the first freshman since 1987 to win Most Outstanding Player accolades. She'd go on to repeat that feat in each of the next three years, becoming the first player — man or woman — to win MOP in four consecutive seasons. To this day, she is also the only player in the history of college basketball besides Ralph Sampson to be the consensus National Player of the Year three times.

In the age of the one-and-done, Wisconsin's Frank Kaminsky was a rare case of a four-year letter winner whose star burned brighter each season he stepped onto the court. The 7-footer appeared in three Sweet Sixteens, two Final Fours, and a title game during his time with the Badgers. In his senior season, Kaminsky registered 18.8 points and 8.2 rebounds per game en route to winning Naismith College Player of the Year and John R. Wooden Award honors.

The latest in a long line of Duke villains, Grayson Allen was as much a star in the eyes of the Blue Devil faithful as he was a terror to the rest of the college basketball world. He broke onto the scene with a nine-point, five-rebound performance in Duke's Final Four win over Michigan State, providing a crucial spark off the bench for Mike Krzyzewski's Blue Devils. He then poured in 16 points in 21 minutes during the national championship game, helping Duke to its fifth title in the Krzyzewski era. He was a star in Durham for the next three years, averaging 17.2 points per game for the Blue Devils in that span. But perhaps more famous than his on-court prowess were his widely publicized incidents of tripping and subsequent outbursts during his sophomore and junior seasons. He was suspended for a game and stripped of his captaincy as a result, but longer-lasting is his reputation as a dirty player that has followed him into his NBA career.

Before he was lighting up the NBA as one of the most prolific scorers in the game, Kemba Walker made a name for himself by leading the UConn Huskies to relevance on the national stage. In his three years in Storrs, Connecticut, the point guard steadily progressed from an 8.9 point-per-game contributor to a 23.5 point-per-game powerhouse and, in his final season with UConn, led the Huskies to both a Big East crown and a national championship.

A 6-foot-9 force in the paint and known dunker, Brittney Griner shined for Baylor from the get-go. As a freshman, she blocked 223 shots to set the NCAA women's basketball record in blocked shots in a single season. By the end of her senior year, Griner had won a national championship and finished her other college seasons with Sweet 16, Elite Eight, and Final Four appearances. She also accrued 736 blocked shots for her career to set the NCAA record for both men and women.

A prolific scorer who, like fellow Oklahoma Sooner Trae Young, elicited comparisons to sharpshooter Stephen Curry, Buddy Hield lit up the Big 12 and the entire college basketball world with prowess on the perimeter and aggression in the paint. The Bahamas native nearly became the eighth college basketball player since 1983 to join the elusive 50-40-90 club but fell just four made free throws short. He led the Sooners to four-straight NCAA tournaments, including a Final Four appearance during his final year in Norman, and earned Naismith College Player of the Year and John R. Wooden Award honors that same year.

Zion Williamson had one of the most impressive and most dominant single seasons in all of college basketball history, nonetheless the decade. Duke's star freshman — who was famous for his high-flying dunks and ridiculous vertical leap despite a 6-foot-7, 285-pound frame — proved that he was more than just a dunker through unprecedented efficiency and mastery on both ends of the floor. Williamson wrapped up his collegiate career with an impressive 22.6 points and 8.9 rebounds per game and 68% shooting from the field, good enough to sweep postseason honors and become the first freshman to win the Naismith College Player of the Year and John R. Wooden Award since Anthony Davis earned both honors in 2012.

(AP Photo/Patrick Semansky, File)
Up Next

Now check which states are most supportive of Colin Kaepernick's NFL return:

Map shows which states support Colin Kaepernick the most