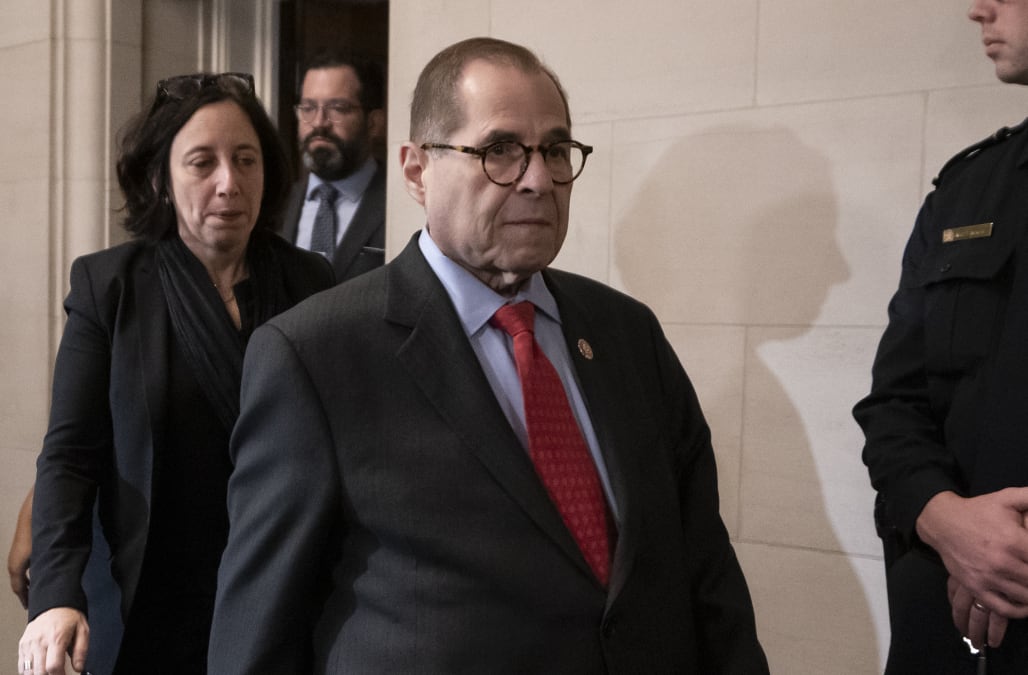 The House Judiciary Committee released its full report on the impeachment of President Donald Trump after midnight Sunday, ahead of consideration by the full House as early as Wednesday.

The report, a 658-page document, is an explanation in four parts of the committee's process and justification for recommending two articles of impeachment against Trump, abuse of power and obstruction of Congress.

The committee, led by Rep. Jerrold Nadler, D-N.Y., devotes part one to detailing the process by which the House Intelligence Committee investigated the case against Trump. Part two is dedicated to examining the standards of impeachment laid out in the Constitution.

Part three delves into the details of Democrats' case that Trump abused the power of his office to pressure a foreign government, Ukraine's, to investigate his domestic political rival and interfere in the 2020 presidential election.

"President Trump has realized the Framers' worst nightmare. He has abused his power in soliciting and pressuring a vulnerable foreign nation to corrupt the next United States Presidential election by sabotaging a political opponent and endorsing a debunked conspiracy theory promoted by our adversary, Russia," the committee wrote.

Part four makes a case that the president obstructed Congress' ability to hold the executive branch accountable by flouting House investigators' requests for documents and testimony.

"Other Presidents have recognized their obligation to provide information to Congress under these circumstances," the report states. "President Trump's stonewall, by contrast, was categorical, indiscriminate, and without precedent in American history."

The committee concludes that Trump "has fallen into a pattern of behavior: this is not the first time he has solicited foreign interference in an election, been exposed, and attempted to obstruct the resulting investigation. He will almost certainly continue on this course."

"For all the reasons given above, President Trump will continue to threaten the Nation’s security, democracy, and constitutional system if he is allowed to remain in office. That threat is not hypothetical," the report states.

In a response to the Democratic findings, Doug Collins of Georgia, the ranking Republican on the committee, said the articles failed to establish any impeachable offense, arguing that "an accusation of abuse of power must be based on a higher and more concrete standard than conduct that 'ignored and injured the interests of the Nation.'"

"The people, through elections, decide what constitutes the 'interests of the nation,'" Collins wrote.

"It is no surprise the allegations shifted from quid pro quo, bribery, and extortion to settle on an undefined 'abuse of power,'" according to Collins.

The minority also argued that obstruction of Congress isn't an impeachable offense per se because "the Founders intended to create interbranch conflict."

"The fact that conflict exists here does not mean the President has committed either a high crime or a high misdemeanor," Collins wrote, arguing that Congress should pursue the matter in the courts.

The terms laid out in a letter to Senate Majority Leader Mitch McConnell, R-Ky., was evidence that Democrats are seeking an evidentiary trial, not intending to rely on the House investigation.McConnell responded that that he would meet with Schumer "soon" to discuss plans for a possible trial.