Omar on Trump and her unapologetic support for Sanders 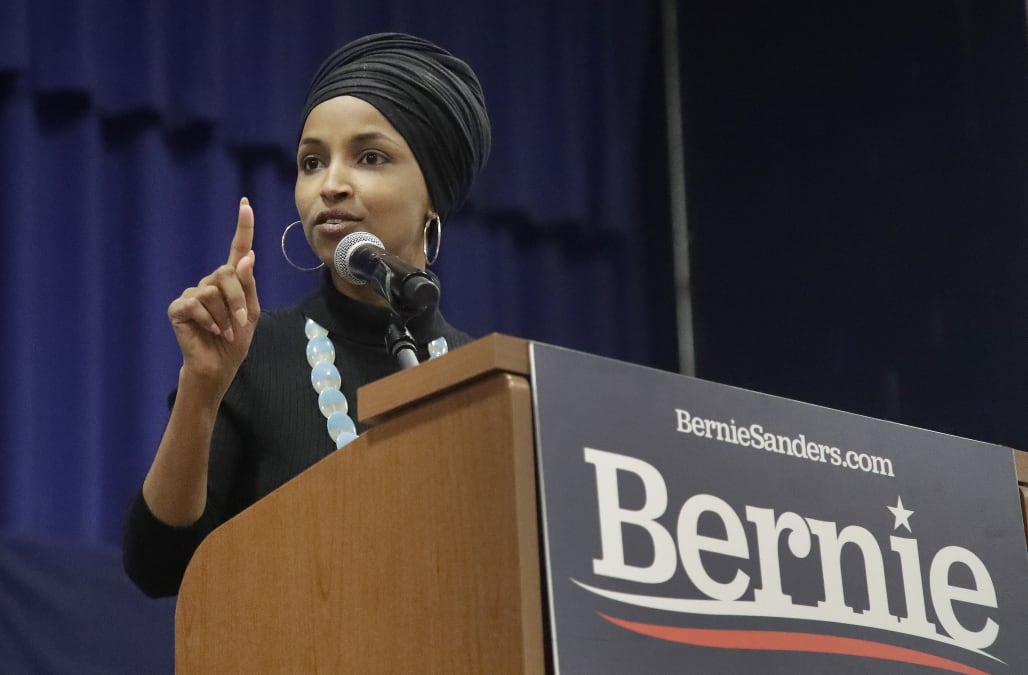 In October, Trump, who has called for Omar’s resignation, blasted her as a “disgrace” and an “America-hating socialist” at one of his rallies in her home state. Trump also suggested Minnesota’s Somali immigrant community, which Omar is part of, has had a negative impact on the state.

It was not the first time Trump focused on Omar. The president has previously tweeted that she and the other progressive congresswomen of color, known as “the Squad,” should go back to their countries of origin. That remark sparked a House resolution condemning Trump for “racist comments,” a characterization he vehemently disputed.

In a wide-ranging interview with Yahoo News on Friday, Omar said she believes Trump has an unhealthy fixation on her.

“It seems like a serious obsession, and for all the things he should seek help for, that should be one,” Omar said of Trump’s focus on her.

At the same time, Omar, who was in New Hampshire campaigning for presidential candidate Sen. Bernie Sanders, I-Vt., said she is not surprised to have Trump’s attention.

“This has been a president that has used his energy in the most xenophobic, racist ways to mobilize a base that is understandably frightened about the kind of America they might have if we continue to build the kind of connected communities we’re all excited about,” she said.

The level of presidential attention she has received is highly unusual for a 37-year-old freshman lawmaker. But then again, many things are unusual about Omar.

In addition to  her youth and position as one of the more progressive members of the House, Omar is one of the first two Muslim women to serve in Congress. Omar, who emigrated to the U.S. as a child after her family fled the civil war in her country and spent time in a refugee camp, is also the first Somali-American and the first naturalized citizen from Africa to serve in Congress. But along with being a pioneering presence on Capitol Hill, Omar has also become a polarizing one, and has been dogged by accusations of anti-Semitism, which she fiercely denies.

But Omar is willing to be branded a political “radical,” and she made that the theme of her speech in support of Sanders at Southern New Hampshire University on Friday. “The media and many political pundits have labels they place on Sen. Bernie and myself, and sometimes we get the same titles, and one that they like to use is ‘radical,’” Omar said.

Omar rattled off a series of policy positions that she and Sanders share, including support for Medicare for All, free public education, elimination of student debt, the opinion that climate change is “an existential threat to humanity,” and the view that it is a “moral outrage” for the fossil fuel industry to receive “corporate welfare.”

“If that belief is radical, then I am so proud to be radical,” Omar said after each point and the crowd applauded.

“The truth is, the only radicalism we are motivated by is radical love,” Omar continued. “Bernie Sanders has been motivated by radical love his whole life, and he has never wavered. This is the same agenda that motivated Dr. Martin Luther King.”

Omar suggested Sanders shares Dr. King’s desire to focus on “three evils facing America;” racism, poverty, and war. She framed this as the “only way we can defeat the dark cloud of hate hanging over America.”

Sanders’s staunch progressivism has drawn predictable fire from conservatives, but it’s also sparked fear from Democrats who worry he could alienate moderate and independent voters in a pivotal election year. Omar dismissed the idea that Sanders is too far left to win the election. As evidence, she pointed to the fact Sanders lost the Democratic primary in 2016 to a more centrist candidate, Hillary Clinton, who was then defeated.

“In 2016, we made the same argument, we ended up choosing a candidate, and we still got Trump,” said Omar. “It is really about finding candidates that resonate with folks, and I don’t know anyone better than Bernie who does that.”

After the introduction from Omar in Manchester, Sanders delivered his stump speech. But first, he offered praise for the congresswoman.

“You’re looking at one of the extraordinary people in American politics,” Sanders said of Omar.

Much of the anger directed toward Omar has stemmed from her criticism of American support for the Israeli government in light of its treatment of Palestinians.

Opponents have accused Omar of using anti-Semitic rhetoric in some of her comments, including a 2012 tweet in which she said Israel had “hypnotized” the world and statements she has made since entering Congress. In February, Omar offered an “unequivocal” apology after a tweet she that characterized congressional support for Israel as being “all about the Benjamins,” which many critics saw as a clear allusion to stereotypes of conspiratorial Jewish financial control over public life.

In her apology, Omar said she meant to highlight the “problematic role of lobbyists” including pro-Israel groups. Omar further said “allies and colleagues” were “educating” her on the “painful history of anti-Semitic tropes.”

The debate continued as Omar campaigned for Sanders in New Hampshire. Ahead of her events on Friday, Judy Aron, a Jewish Republican legislator in the state, wrote a note on Facebook criticizing Democrats for “bringing noted anti-Semite and opponent of Israel Rep. Ilhan Omar to New Hampshire.” Aron’s statement was subsequently circulated by the state Republican Party.

Yet, in supporting Sanders, Omar is pushing for the election of a man who would be the first Jewish president. Asked whether she saw the moment as a milestone given the history of tension between the Jewish and Muslim communities, Omar pointed to data showing the two groups are actually particularly close allies in the United States.

“There’s a public narrative that gets manipulated and exploited, and then there’s the reality of our lived experiences,” Omar said. “For me, Bernie has always been someone who has reached out and connected on a multitude of things, who’s been serious about building a relationship more so than anyone else outside of, you know, obviously, my Squad sisters.”

Omar said Sanders’s efforts to work with her led to a unique bond between them.

When asked about her past comments that were seen as allusions to anti-Semitic stereotypes, Omar framed it as a case of needing to increase her awareness as someone who grew up outside of American culture.

As an example, Omar noted that Somalis do not use last names in the same way as English speakers do. She described having to learn how to address people in this way and educating herself on which names indicate different ethnicities.

“There are many times where people will say that’s an Irish last name, that’s a Jewish last name,” Omar explained. “And that’s not something I’m familiar with. I didn’t grow up in a culture where last names are a thing.”

Omar’s appearances for Sanders in New Hampshire were part of a push to drum up youth support in the key early primary state. New Hampshire also is home to some Somali refugees, and a Sanders campaign source said Omar met with members of the community during her visit.

In addition to her speech in Manchester, Omar knocked on doors of local residents, appeared with the senator at an awards ceremony hosted by the New Hampshire Young Democrats, and made remarks at a campaign rally for him in Nashua.

A group of five young women who came to the rally from a nearby high school said they were still undecided about whom to support, but they added that Omar’s endorsement made them more drawn to Sanders. One of the girls, Ruthie Zolla, said she appreciated Omar for being “unafraid” to tackle serious issues and “corruption.”

“I like that she’s fearless in everything she believes in,” said Zolla.

Three of the young women, who identified themselves as Jewish, said the accusations of anti-Semitism against Omar are unfair. One of them, Ella Weintraub, attributed the allegations to “fear of change and Islamophobia.”

“She just has to put up with so much more being a Muslim woman in this position of power,” Weintraub said of Omar.

The young women all said it was meaningful to them to see Omar and her fellow Squad members, who are all women of color, line up behind Sanders.

“When I heard that ilhan Omar and [Rep. Alexandria Ocasio-Cortez, D-N.Y.] supported Bernie, that was really a big turn-on for me,” said Regan O’Brien, one of the students.

Indeed, the endorsement from the Squad has been a turning point for Sanders, who faced an impression that he could not appeal to women and minorities during his unsuccessful presidential bid in 2016. Since mid-October when Sanders earned the endorsement of Omar, Ocasio-Cortez, and Rep. Rashida Tlaib, D-Mich., he has surged to a second place average in national polls behind former Vice President Joe Biden.

While Sanders is running behind Biden in national polls, his numbers in key early states look far better. Sanders’s recent surge has brought him to first place in New Hampshire, and he’s in second place in Iowa, where Biden is polling third, behind Sanders and South Bend, Ind., Mayor Pete Buttigieg. His strength in early states has clearly made Sanders one of the three frontrunners in the race, along with Biden and Buttigieg.

Sanders has also made gains as another progressive candidate, Sen. Elizabeth Warren, D-Mass., has seen her numbers dip. Warren has the endorsement of the fourth Squad member, Rep. Ayanna Pressley, D-Mass., who appeared on the senator’s behalf at the Nashua event where Omar campaigned for Sanders.

The Squad members who have backed Sanders have faced questions about why they didn’t choose to support another woman or person of color. Omar told Yahoo News her decision was based on Sanders’s platform.

“For me, it’s really never been a particular leader,’ Omar said. “It’s always about the agenda.”