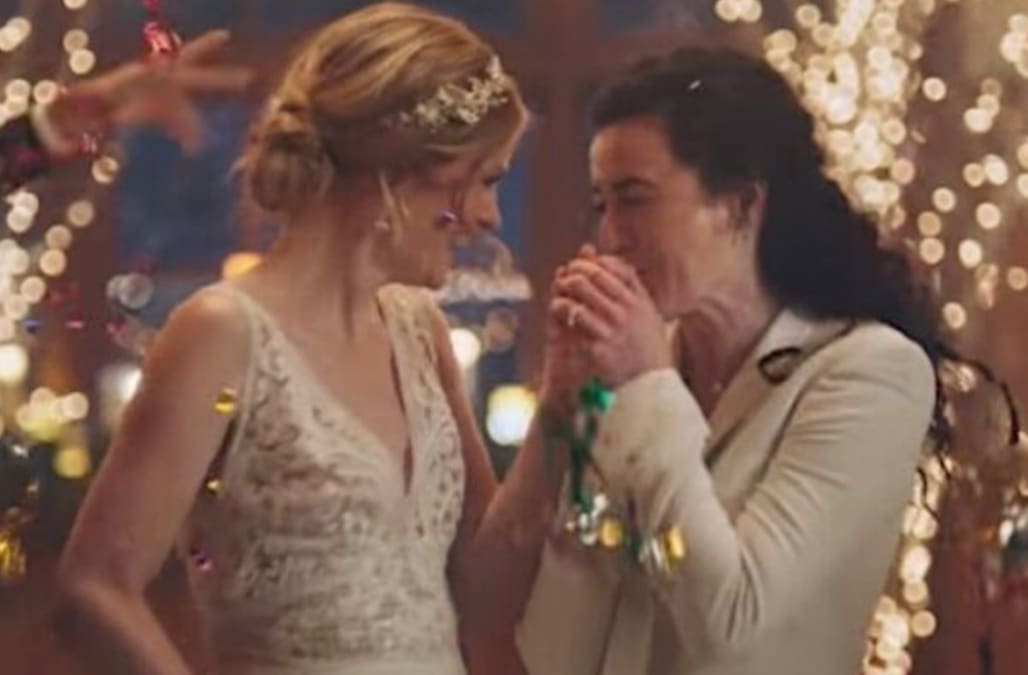 The Hallmark Channel reversed course on Sunday and decided to not ban advertisements featuring same-sex couples.

After numerous conservative groups, including One Million Moms which met with Crown Media Holdings (the channel’s parent company) CEO Bill Abbott, started petitions against “airing movies and commercials with LGBT content,” Hallmark Channel removed a commercial for the wedding website Zola that featured a same-sex couple kissing at the altar.

The move inspired backlash to the company immediately, including by fellow Christmas-movie-trafficker Netflix.

A spokesperson for Zola said the company had sent multiple advertisements to the channel and pulled each commercial after Hallmark’s initial decision.

“The only difference between the commercials that were flagged and the ones that were approved was that the commercials that did not meet Hallmark’s standards included a lesbian couple kissing,” Mike Chi, Zola’s chief marketing officer, told E! News. “Hallmark approved a commercial where a heterosexual couple kissed. All kisses, couples and marriages are equal celebrations of love and we will no longer be advertising on Hallmark.”

A Hallmark spokesperson told the Associated Press on Saturday that decision was made in order to let the channel focus on its main goal: “to provide entertainment value.”

In revealing the reversal Sunday, Perry said, “Our mission is rooted in helping all people connect, celebrate traditions, and be inspired to capture meaningful moments in their lives. Anything that detracts for this purpose is not who we are.

“I am sorry for the hurt and disappointment this has caused. Hallmark Channel will be reaching out to Zola to reestablish our partnership and reinstate the commercials. We will continue to look for ways to be more inclusive & celebrate our differences.”

LGBTQ media advocacy group GLAAD thanked everyone who called on Hallmark to not ban the ads Sunday night.

“LGBTQ people are, and will continue to be a part of advertisements and family programming and that will never change,” GLAAD President and CEO Sarah Kate Ellis said in a statement.

More from New York Daily News:
Hallmark Channel reverses decision to ban ad that showed same-sex couple kissing after backlash
Nets bounce back and brush Sixers aside for easy win at home
Canadian couple gets $9 million jury verdict after getting hit by truck in Oregon