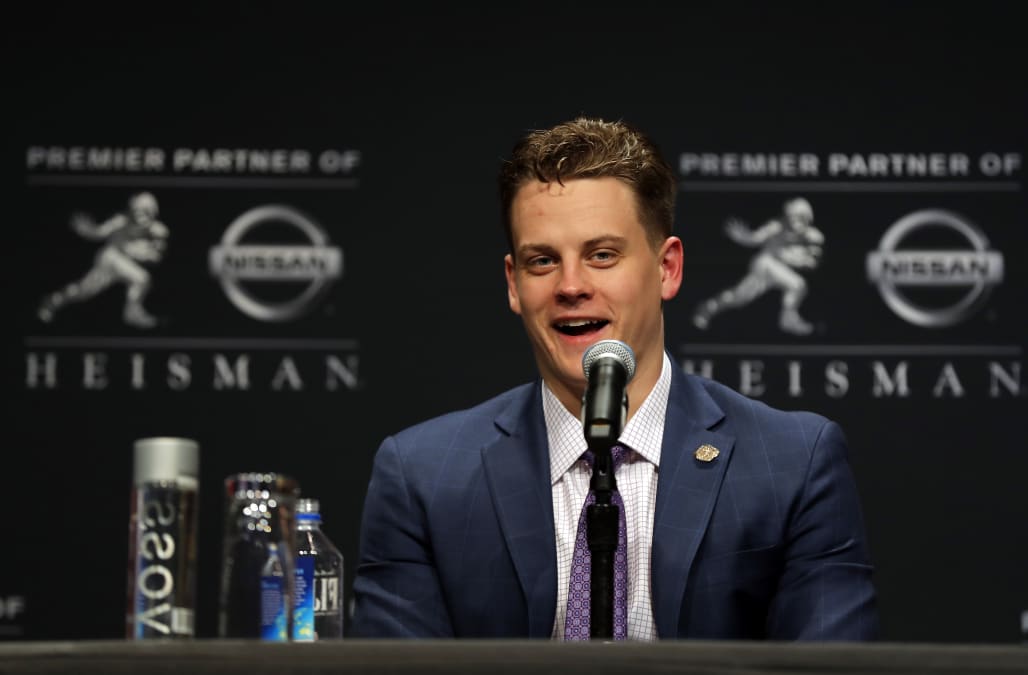 Joe Burrow is a Heisman Trophy winner. And the voting wasn’t even close.

The LSU quarterback became the fourth-straight quarterback to win the prestigious award as he easily beat out Ohio State QB Justin Fields, Oklahoma QB Jalen Hurts and Ohio State DL Chase Young. Burrow, the quarterback of the No. 1 team in the College Football Playoff rankings, threw for an SEC record 48 touchdowns and completed nearly 78 percent of his passes as LSU went 13-0 and will face No. 4 Oklahoma in the Peach Bowl on Dec. 28.

Burrow thanked his offensive line first after he held back tears following his acceptance of the award.

“I couldn’t have done it without them,” Burrow said before thanking his receivers and the rest of his teammates.

Burrow’s Heisman was foreshadowed on Thursday when he took home the Davey O’Brien Award for best quarterback, the Maxwell Award for player of the year and also snagged the Walter Camp player of the year honor. When you’re the most productive quarterback on the best team in the country — Burrow has accounted for 51 total touchdowns — you’re going to deservedly win a lot of awards.

In addition to being the fourth-straight QB to win the trophy, the former Ohio State backup is also the third-straight Heisman winner to have transferred during his college career. 2017 winner Baker Mayfield walked on at Texas Tech before transferring to Oklahoma and 2018 winner Kyler Murray started his college football career at Texas A&M before he joined the Sooners.

All three of the quarterbacks at the Heisman ceremony were transfers. Fields went from Georgia to OSU after the 2018 season and Hurts transferred to Oklahoma from Alabama.

“My journey, I wouldn’t have traded it for anything in the world,” Burrow said.

Burrow is also the third Heisman winner in the last four years to start the season as a player who wasn’t close to being a trophy-winning favorite. Only Mayfield, who threw for 40 TDs in 2016, was a guy widely considered as a player to beat who took home the trophy in that span.

And Burrow’s year-to-year improvement is remarkable among Heisman winners.

Burrow is the 22nd QB to win the Heisman since 1990. Some, like Mayfield, Sam Bradford, Ty Detmer and Charlie Ward were very good the season they won the Heisman. Some, like Jameis Winston and Johnny Manziel, didn’t play at all. Others, like Murray and Tim Tebow, saw sporadic playing time.

Very few have made a leap like Burrow did from 2018 to 2019. In the last 30 years, only Jackson and Carson Palmer are comparable to Burrow in year-to-year jumps.

Of course, a lot of Burrow’s improvement comes from LSU’s offensive changes from 2018 to 2019. The team hired former New Orleans Saints assistant Joe Brady as its passing game coordinator and Brady’s hire coupled with the adaptability of coach Ed Orgeron and offensive coordinator Steve Ensminger let LSU’s offense accelerate to levels it had never reached.

Burrow was the perfect pilot. He’s thrown just 60 more passes than he did in all of 2018. But he’s completed 123 more than he did a year ago and thrown for nearly 2,000 more yards. With a dynamic set of playmakers at wide receiver in Biletnikoff Award winner Ja’Marr Chase, Justin Jefferson and Terrace Marshall, Burrow and free rein to find his dynamic threats down the field. And he did so exceptionally.

Consider the LSU records that Burrow smashed this season.

The previous school record for passing yards in a season was set by Rohan Davey at 3,347 in 2001. The previous single-season touchdown record was held by Matt Mauck and JaMarcus Russell at 28. Burrow broke that in seven games and set a single-game record with six TDs against Vanderbilt.

He’s also just five TDs away from tying Tommy Hodson for the most career touchdown passes (69) despite playing just two seasons with the Tigers to Hodson’s four. And Burrow is already the team’s second-leading passer in career yards.

Nick Bromberg is a writer for Yahoo Sports