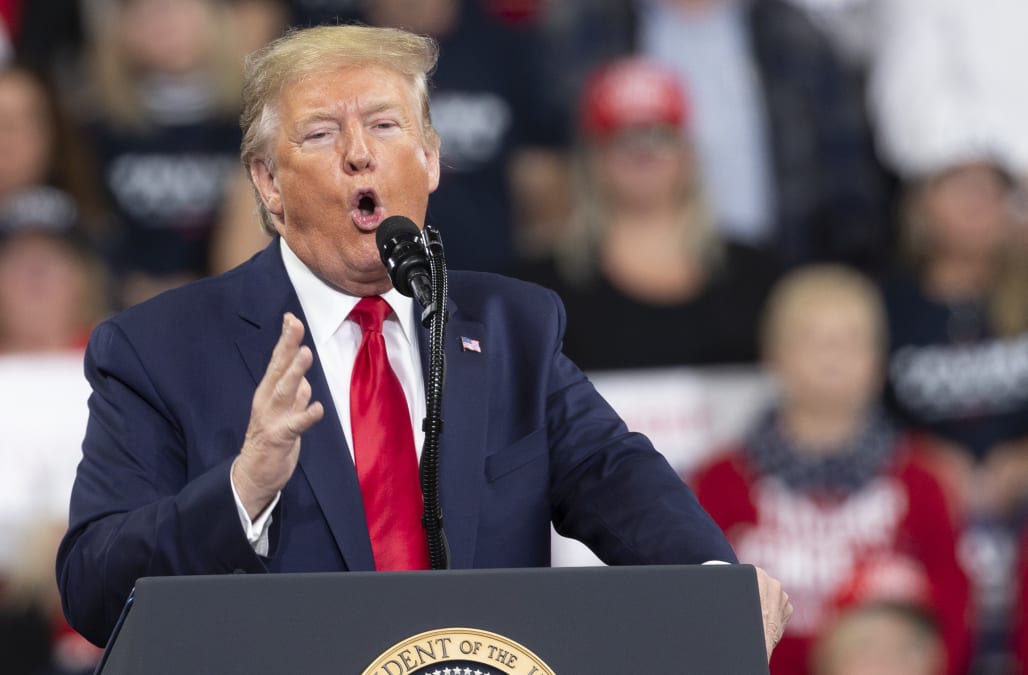 President Donald Trump at a rally in Pennsylvania on Tuesday night lashed out at the FBI calling staff of the agency "scum."

He also doubled down on discredited conspiracy theories following the release of a report which undermined the president's claims that the Russia probe was a "deep state" plot to damage his presidency.

During the rally Trump repeated claims that the FBI had "spied" on his 2016 campaign that in a report released the day before Justice Department Inspector General Michael Horowitz had found to be groundless.

"When the FBI uncovered evidence showing that we did absolutely nothing wrong, which was right at the beginning, they hid that exonerating, you know that, they hid it,"  Trump claimed.

That comment was seemingly a reference to a finding in the report that there were significant "omissions" in the FBI's application for a wiretap of Carter Page, a Trump campaign official.

"They hid it so nobody could see it and they could keep this hoax going on for two more years. They knew right at the beginning."

The report in fact found that the Russia probe was launched on the basis of multiple contacts between Trump campaign officials and Russians.

"The FBI also sent to multiple undercover human spies to surveillance and record people associated with our campaign," continued the president.

The long anticipated report released on Monday found that the FBI was justified in opening an investigation into contacts between Russia and Trump officials and concluded that top officials were not driven by "political bias or improper motivation" in doing so.

It found no evidence that the FBI spied on Trump's campaign.

However the report criticized the FBI for the improper handling of applications for surveillance warrants, such as Page's. In the wake of the report's release, Attorney General William Barr and Pennsylvania prosecutor John Durham, criticized its conclusions in a highly unusual move. Durham has been chosen by Barr to conduct a separate probe into the origins of the Russia investigation that Trump on Tuesday praised.

"I look forward to Bull Durham's (John Durham) report, that's the one I look forward to," said Trump, referencing the title of a 1988 baseball movie starring Kevin Costner in a riff on Durham's name.

"And this report was great by the IG, especially since he was appointed by President Barack Hussein Obama," said the president. Using Obama's middle name is often associated with a groundless far-right conspiracy that aims to smear the former president as involved in a secret Muslim plot to subvert the US.

More from Business Insider:
YouTube deletes more than 300 Trump reelection campaign ads
Elizabeth Warren would be 'happy' to sit down with billionaire Bill Gates and explain her wealth tax
Trump mocked Beto O'Rourke for dropping out of the presidential race, saying he 'quit like a dog'