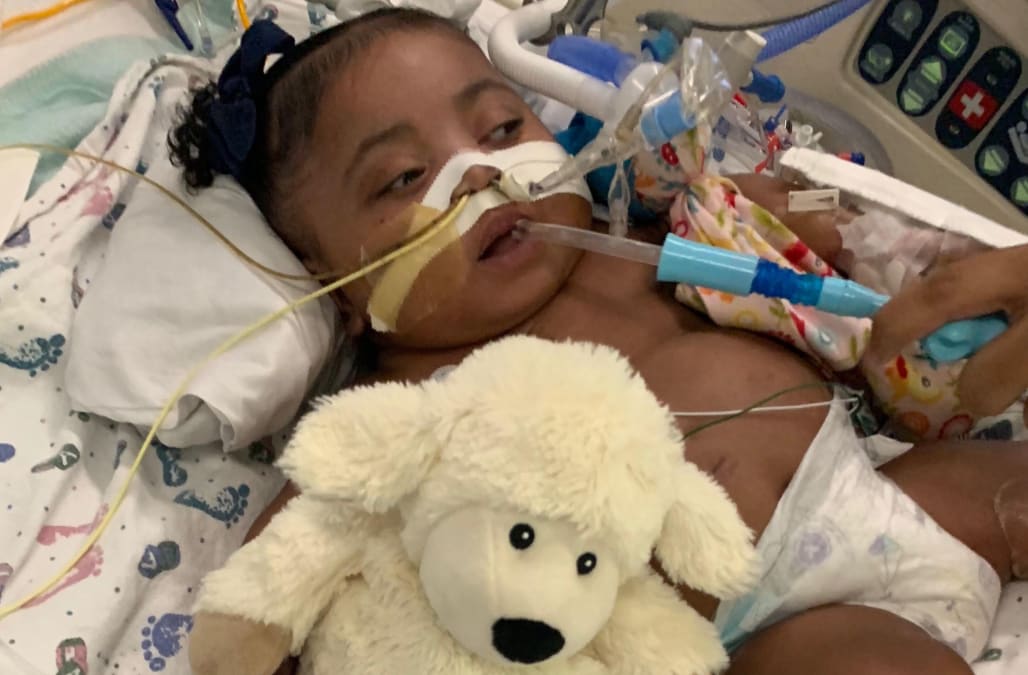 DALLAS (AP) — A new judge will consider if a Texas hospital can take a 10-month-old girl off life support despite her family's opposition after the impartiality of the previous judge was questioned.

A temporary restraining order stopping Cook Children's Medical Center in Fort Worth from removing life-sustaining treatment for Tinslee Lewis was set to expire Tuesday. But afterthe removal last week of Tarrant County Juvenile Court Judge Alex Kim, a new hearing on the family's request for a temporary injunction will now be held Thursday in Fort Worth.

Cook Children's spokeswoman Wini King said the situation is “hard all the way around.”

“We would love nothing more than to be able to make her better and walk her out of here. ... But there comes a point. there comes a time when we have to say: we can’t do any more, it’s not making it any better.”

King added that as they await the hearing, nothing will change with Tinslee's care.

Doctors had planned to remove Tinslee from life support Nov. 10 after invoking Texas’ “10-day rule,” which can be employed when a family disagrees with doctors who say life-sustaining treatment should be stopped. The law stipulates if the hospital's ethics committee agrees with doctors, treatment can be withdrawn after 10 days if a new provider can’t be found to take the patient.

Judge Kim, who issued the temporary restraining order on Nov. 10, was removed from the case Dec. 4 after the hospital filed a motion questioning his impartiality and how he'd gotten the case. The hospital said that after taking the case, Kim spoke about it at an event hosted by a group that opposes the “10-day rule." The hospital also said Kim bypassed the rules regarding random assignment when he designated himself to oversee the case.

Kim did not immediately reply to a request for comment Tuesday.

Texas Right to Life, an anti-abortion group that opposes the “10-day rule," has been representing Tinslee's family. Spokeswoman Kimberlyn Schwartz said Tuesday that Judge Sandee Bryan Marion of Texas' Fourth Court of Appeals has now been assigned to the case.

Cook Children's said hospital officials have been talking to Tinslee's family for months about concerns for her long-term survival. By August, the hospital said, everyone on the girl's care team agreed further care was futile and by September they'd began talking to the family about ultimately withdrawing support. With the doctors and her family still unable to resolve their differences, the ethics committee met Oct. 30 and unanimously decided further treatment was inappropriate.

Related: Toddler taken off life support against family's will

“We know that it’s very difficult for families," King said. "It is hard for them to believe that medicine is limited, but we want to give them time.”

Hospital officials said they've reached out to more than 20 facilities to see if one would take her, but all agree further care is futile.

Schwartz said her group has also been reaching out to facilities and they have hope one will be found, but they need more time.

The case has become a rallying point for Republicans in recent weeks.

But supporters of the 20-year-old law include Texas Alliance for Life, a group that opposes abortion except to save the mother’s life and also opposes euthanasia. Joe Pojman, the group’s executive director, has said the law balances the family’s autonomy with doctors’ rights not to give interventions that cause harm or suffering.

Usually, according to experts, doctors and families can come to an agreement without the issue going to a committee.

Though Texas is one of only a handful of states with such a law, experts said the same process basically occurs in other states that don't have specific legislation. In those states, the hospital would just assess the legal risk of getting sued before proceeding.