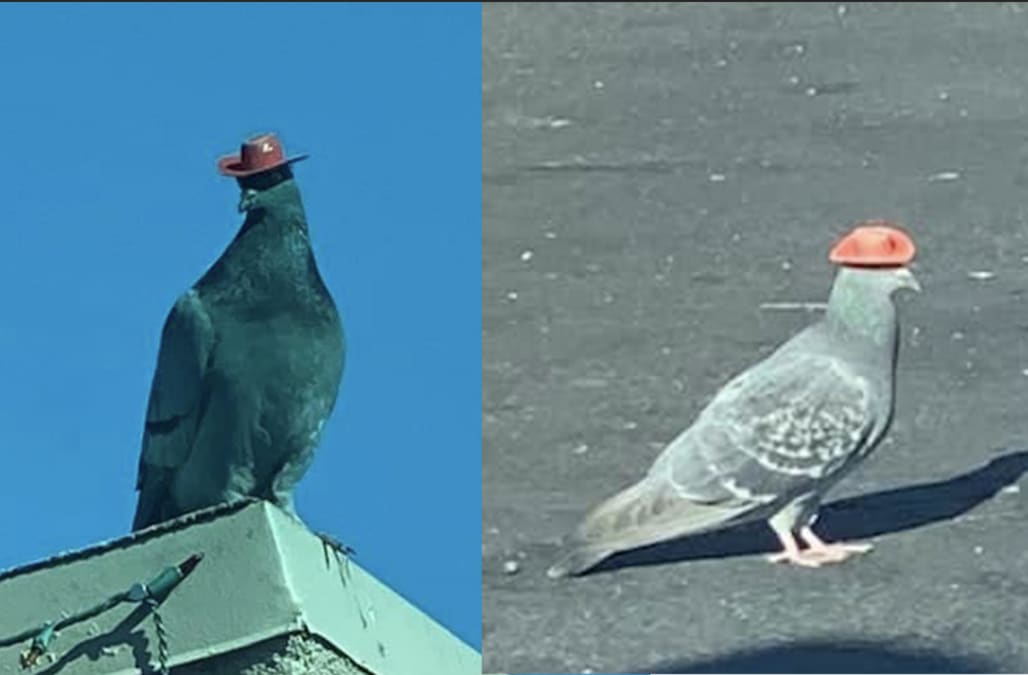 The birds’ Western-style flair first gained attention when a Las Vegas man named Bobby Lee spotted them on Dec. 5. Since then, the animals have become an internet sensation — while also raising animal rights concerns and calls for police intervention.

Lee, 26, filmed the pigeons while driving to the grocery store, according to the New York Times. He recorded the discovery in a series of photos, along with a 12-second video that he posted to Facebook.

"The birds have hats on, bro!" Lee can be heard saying in the video, which has been viewed nearly 100,000 times as of Wednesday afternoon. Other residents who saw Lee’s video began searching, with some posting their findings to social media.

One woman, Kassandra Flores, seemed to find more evidence in the strange mystery, sharing a video on Dec. 9. Flores told CNN it was an exciting moment.

I finally found one!!! @LasVegasLocallypic.twitter.com/j2u90R2esL

"At first it was outside my door and I was excited... but before I could get a video, he flew away," Flores said. "And then as I was leaving I [saw] him again and was able to get a video."

But it's still unclear where the hats came from, or how they ended up on top of the birds' heads. The New York Times reported that although the Wrangler National Finals Rodeo was in Las Vegas on Dec. 5, the event has denied any involvement.

The city's police department has even weighed in on the matter, with a spokesperson telling the New York Times it does not consider the pigeons to be a police issue at the moment.

Lofy Hopes, a pigeon-focused animal rescue group based in Las Vegas, has been vocal on the mystery, noting that it appears as though the tiny hats had been glued to the birds' heads.

"When we saw them today, you could see some loose feathers in the glue around the hat," Mariah Hillman, the organization's co-founder, told CNN. "It's definitely a concern."

Some experts are less concerned though. Charles Walcott, a Cornell University zoologist with longstanding experience in studying pigeons, told the New York Times he believes the animals are likely OK, adding that he found the hats "cute."

"I think the thing that I would emphasize is I can’t see that it is causing any great harm to the pigeons," Walcott said. "They look like happy pigeons to me. It is hard to know, of course, because they will not talk to us."

Despite the somewhat serious debate surrounding the animals, many social media users just wanted to have fun with the situation.

"Las Vegas Animal Control confirmed that the new leading cause of death in pigeons is saloon shootouts," one Twitter user joked.

"Please tell me they are also getting around on horseback," another said.