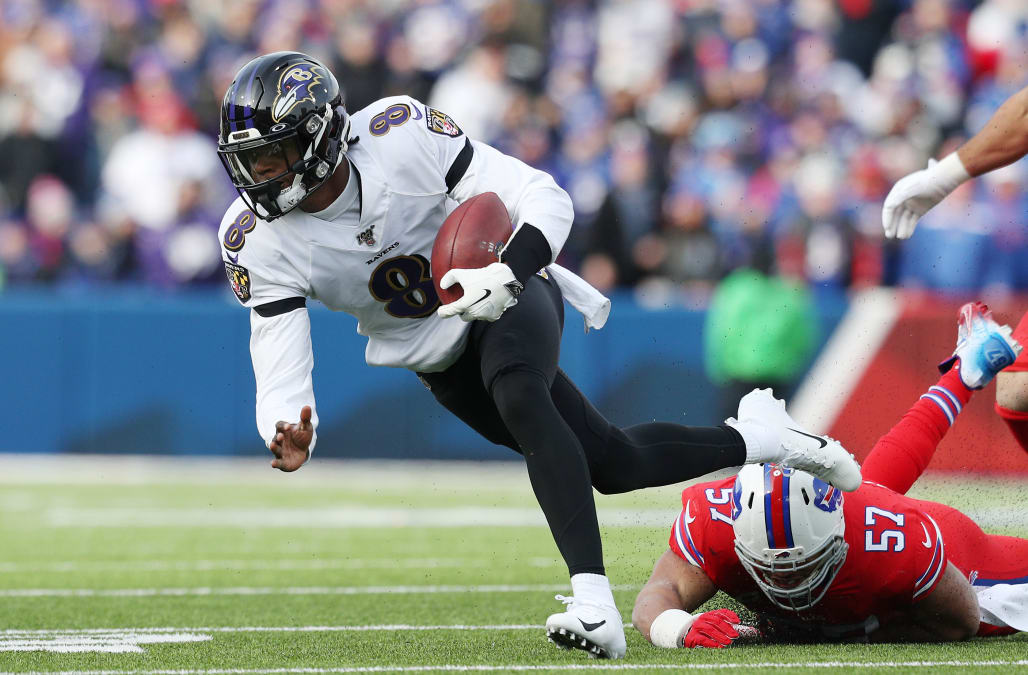 As Lamar Jackson and the Baltimore Ravens continue to rip through the league’s defenses, you can imagine defenses are just going to respond by just trying to hit harder. And possibly lower, if what the quarterback has noticed is true.

Limited in practice with a quad injury for the second straight day on Tuesday, Jackson confirmed he will play in the Ravens’ Thursday Night Football game against the New York Jets. When asked if opponents had been hitting him lower in the last two games, he had some interesting things to say.

“Yeah, they have, a lot more and especially when I’m inside the pocket and stuff like that,” Jackson said. “When I’m out on the edge, I kinda avoid it all the time. When I’m in the pocket trying to complete a throw, that’s when nine times out of 10 they go for my legs. I can’t do anything about, I’m trying to complete that pass. It is what it is.”

When asked if he believed teams were specifically targeting him, Jackson chalked the hits up to the nature of the sport he plays.

Jackson’s last two games have been against two of the more physical defenses in the league with the San Francisco 49ers and Buffalo Bills, with the quad injury coming against the Bills. Both teams rank in the top 3 in both total and scoring defense.

The two defenses succeeded in stopping Jackson from blowing them out of the water like they did other teams, but couldn’t stop the Ravens from getting the win and Jackson from tallying five total touchdowns (four passing) while getting sacked only once in each game.

When asked about the matter, Ravens safety Earl Thomas said he agreed with Jackson’s assessment and that the officials need to do more to protect the quarterback.

“Yes. Especially on the sideline, every time somebody hits him, we’re like ‘Man, he don’t need to be taking those hits,’” Thomas said. “I think the refs need to pay closer attention to that as well and protect him a little bit more, because teams are trying — I’m not saying they’re trying to hurt Lamar — but they are definitely going at his legs more than they were doing it at first.”

Thomas also said Jackson was very durable, but was sacrificing his body while playing.

“He’s very durable,” Thomas said. “His toughness, you can’t question it. He’s taken a lot of hits. He’s sacrificing his body for the team, I respect that.”

While Jackson playing on Thursday is obviously good news for the Ravens, less good is that left tackle Ronnie Stanley remains in the concussion protocol, and seems unlikely to be cleared in time for Thursday, per Penn Live’s Aaron Kasinitz.

Stanley has been among the best pass-blockers in football this season, so that would register as a big loss. Fortunately, the Ravens are playing a Jets defense that ranks 23rd in the league with only 29 sacks, so that could mitigate the potential loss of Stanley.

Back-up tackle James Hurst, who has not started a game this season, would start in Stanley’s place with major playoff seeding implications on the line.

Jets DC says Lamar needs to cut down on running

As Jackson discusses taking lower hits in the pocket, the man in charge of stopping him is saying that the quarterback needs to cut down on his running.

Jets defensive coordinator Gregg Williams — who you might remember has a history of motivating defenses to purposefully injure players — told reporters Tuesday that Jackson has been taking a tough amount of punishment.

Using a Michael Vick comparison, Williams said Vick learned to become a passer "as the hits piled up." Of Jackson, he said: "It's been remarkable on the minimal big hits he has taken, but when he starts taking those hits like a running back takes, it's a tough business to be in. Sometimes it motivates you to be an even better thrower."

Of course, it’s worth noting that many of Jackson’s most dangerous hits do come from inside the pocket, and that Jackson is already a good enough thrower to lead the NFL in QBR and passing touchdowns. Jackson is among the best ever at avoiding contact as a runner, but things change when he’s looking downfield in the pocket and a pass-rusher is lunging behind him.

Jackson even noted that his injury against the Bills came not one of his ridiculous runs, but on this 61-yard touchdown pass to tight end Hayden Hurst.

As Jackson said, it’s a dangerous game no matter where you’re playing. We’ll see if Williams gets his wish on Thursday, and if that proves to be any help for the 5-8 Jets.