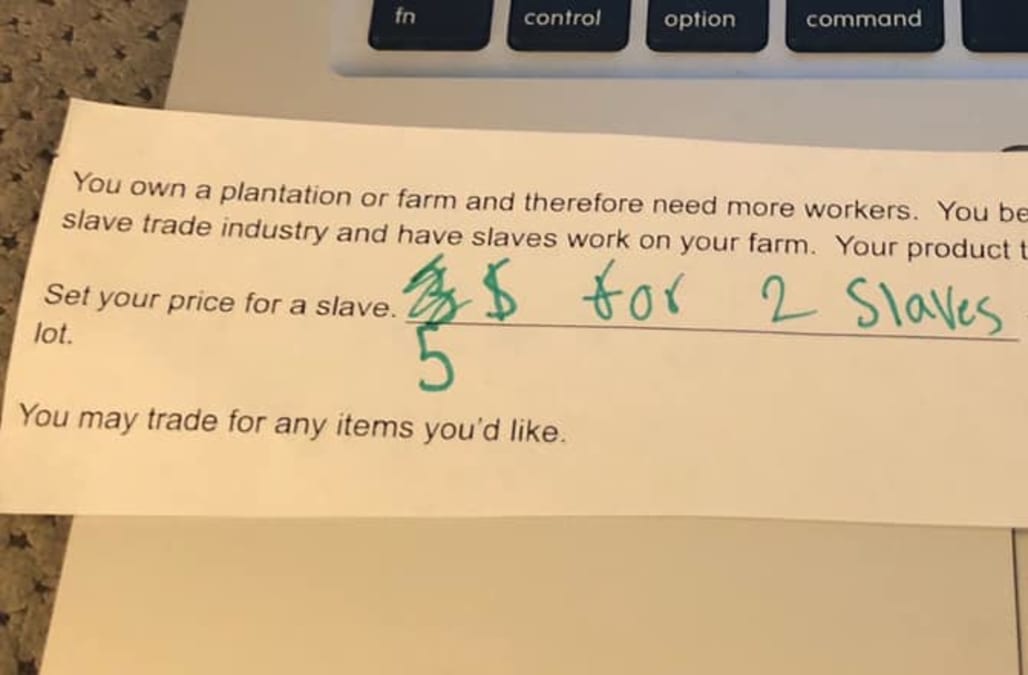 A "slave trade assignment" given to fifth-grade students in Missouri has sparked outrage by parents and an investigation by the school district.

An unidentified teacher at Blades Elementary School in Oakville, Mo., asked students in a social studies class to consider what they would charge for slaves, KTVI reported. A photo of the assignment was posted on Facebook by Lee Hart, who said her friend's child brought the assignment home.

"You own a plantation or farm and therefore need more workers. You begin to get involved in the slave trade industry and have slaves work on your farm. Your product to trade is slaves," the paper reads.

Students are then prompted to set a price for a slave and continues, "These could be worth a lot. You may trade for any items you'd like."

"It is so wrong on so many levels," Hart said on Facebook while asking advice on a plan of action.

Commenters on the post blasted the assignment as "disgusting" and "unbelievable."

The school was notified and principal Jeremy Booker sent a letter to parents saying the assignment was "culturally insensitive." The letter also said the school district is investigating the incident. In the meantime, the teacher has been placed on administrative leave, a district spokeswoman told the St. Louis Post-Dispatch.

"The teacher has expressed significant remorse," the letter claimed.

John Bowman, president of the St. Louis County Chapter of the NAACP, told KTVI that the assignment is "unacceptable" and there needs to be a public apology.