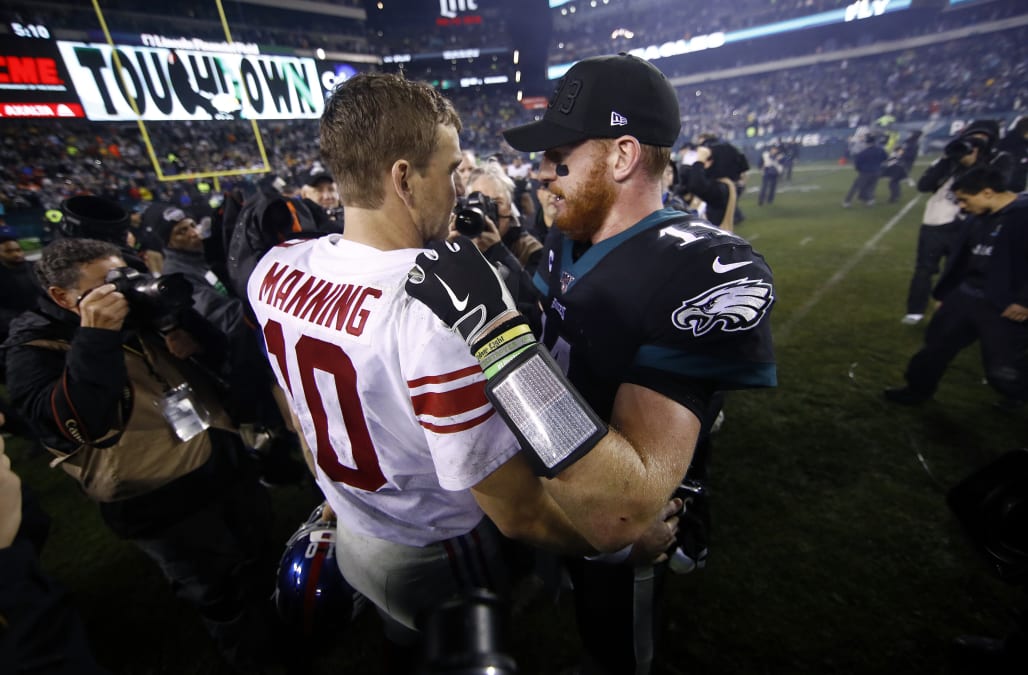 The Philadelphia Eagles were in extreme survival mode on Monday night.

There was another wave of key injuries and a 17-3 deficit to the 2-10 New York Giants. They were down to two healthy wide receivers early in the game. Another loss would have dropped them to 5-8 and even in the putrid NFC East, that would have put their postseason hopes in serious jeopardy.

The Eagles aren’t a good football team, but give them credit for resilience. They came back to beat the Giants in overtime, ruining Eli Manning’s first start since Week 2. The game went to overtime and Zach Ertz caught a 2-yard touchdown in overtime to give the Eagles a 23-17 win.

Nothing about the Eagles looked like a division championship team, aside from perhaps their refusal to lose in the second half and overtime of an ugly game. But they’re in first place with the Dallas Cowboys at 6-7 after the win. Crazy.

The Giants were the story in the first half, and in particular it seemed Manning’s return to the lineup would become an epic tale.

Manning threw two touchdowns to rookie Darius Slayton. Eagles fans were booing practically non-stop for the last few minutes of the second quarter, and booed their team into the locker room at halftime.

The frustration was understandable, but so were the Eagles’ struggles. Nelson Agholor was inactive due to an injury and Alshon Jeffery went down in the first half with a foot injury. And one of the healthy receivers, J.J. Arcega-Whiteside, limped off in overtime with an injury. Right tackle Lane Johnson left with an ankle sprain. Miles Sanders even missed some time due to cramping.

Carson Wentz didn’t look great, but he didn’t have much to work with. But the Eagles defense started to hold and Wentz was able to start moving the ball with the talent he had on hand.

Wentz is paid to carry the Eagles offense, and he did that after halftime. The Eagles cut the Giants’ lead to 17-10 and then Wentz led another drive to tie it late in the fourth quarter. The drive included a Wentz quarterback sneak on fourth-and-1 to extend the drive. He hit Ertz for a 2-yard touchdown with 1:53 left in regulation to tie it. The Eagles took the extra point and the tie.

After the Eagles defense held again, denying Manning a storybook game-winning drive, the game went to overtime and Philadelphia won the coin toss.

Running back Boston Scott, who came up big when Sanders was in and out of the lineup, had a long gain on a screen pass. Tight end Josh Perkins, who had never caught a pass in the NFL before Monday night, got a first down. Sanders picked up a big first down on third-and-2 with a strong run. Then Ertz finished it.

The Eagles didn’t look good for most of the game, but that sums up their season well. And they’re still alive for a division title, somehow.