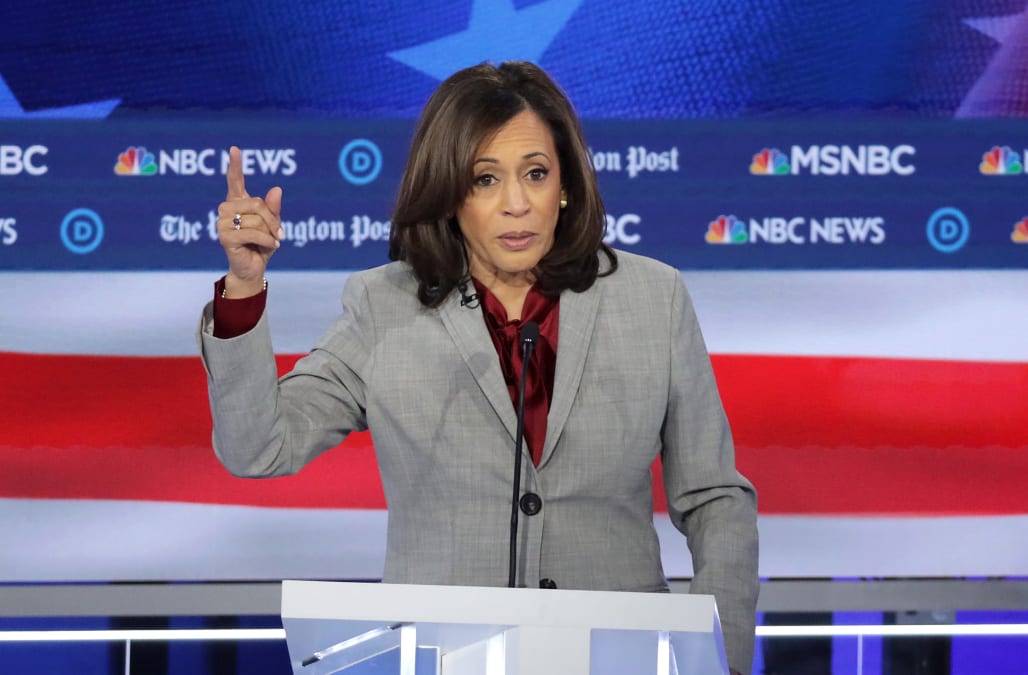 Sen. Kamala Harris (D-Calif.) and a large group of Democratic senators have signed a letter that will be sent to the White House on Monday calling on President Donald Trump to fire senior adviser Stephen Miller in light of leaked emails showing the extent of his white nationalist beliefs.

“We write to demand the immediate removal of Stephen Miller as your advisor,” states the letter, a copy of which was provided to HuffPost by Harris’ office.

The leaked emails, the letter says, show that “what is driving Mr. Miller” is “not national security, it’s white supremacy—something that has no place in our country, federal government, and especially not the White House.”

“Simply put,” the letter continues, “Mr. Miller is unfit to serve in any capacity at the White House, let alone as a senior policy adviser.”

The letter adds to growing and prolonged pressure on the White House to get rid of Miller, the aide credited with developing the Trump administration’s brutal anti-immigrant policies.

Nearly one month ago, the Southern Poverty Law Center published a series of blockbuster reports analyzing 900 emails Miller sent to the far-right website Breitbart from 2015 to 2016, when he was working as an aide to former Sen. Jeff Sessions (R-Ala.). The emails show Miller actively shaping Breitbart stories related to race and immigration, encouraging editors and writers at the publication to draw inspiration from explicitly white supremacist websites like VDare.

At one point Miller suggested that Breitbart write about “The Camp of Saints,” a fascist French novel that depicts feces-eating brown people taking over Europe.

“It is simply appalling that a senior advisor to the President advanced parallels between this book and contemporary events,” states the letter the senators sent to the White House Monday.

Another part of the senators’ letter focuses on how Miller’s “demonstrable white nationalist ideology has been directly translated” into Trump administration policy.

“The Muslim ban targeted individuals of color and caused chaos at U.S. airports around the country, wreaking havoc on the lives of countless individuals and families,” the letter states. “The family separation policy tore children from their families, resulting in widely reported mistreatment and human rights abuses of immigrants in detention facilities nationwide. The rescission of Deferred Action for Childhood Arrivals (DACA) has thrown the lives of hundreds of thousands of DREAMers into chaos and instability.”

The Trump administration has continued to defend Miller over the past month. Although never denying the authenticity of the emails published by the Southern Poverty Law Center, the White House has attempted to discredit the civil rights organization, calling it a “long-debunked far-left smear organization.”

But the senators’ letter on Monday shows that outrage over Miller’s emails is unlikely to ebb.

All told, nearly 40 U.S. senators, all Democrats, have now called for Miller to either resign or be fired. Over 100 members of the House of Representatives, also all Democrats, wrote their own letter to the White House last month demanding Miller’s ouster. More than 50 prominent civil rights organizations, including the NAACP, wrote to the White House with the same demand.

A coalition of Jewish groups organizing under the banner Jews Against White Nationalism have called on Miller, who is Jewish, to quit. “As your fellow American Jews,” they wrote in a petition, “we will not rest until you resign.”

And according to a report Saturday from NBC News, Rep. Veronica Escobar (D-Texas) — whose district includes the El Paso Walmart where a reputed white nationalist allegedly massacred 23 Hispanics earlier this year — has called on the Department of Homeland Security to audit its policies to figure out which were developed by Miller in order “to show the motivations of the administration’s immigration policies and shed light on the people that help craft them.”

Here’s the full list of the senators who signed Monday’s letter to the White House: