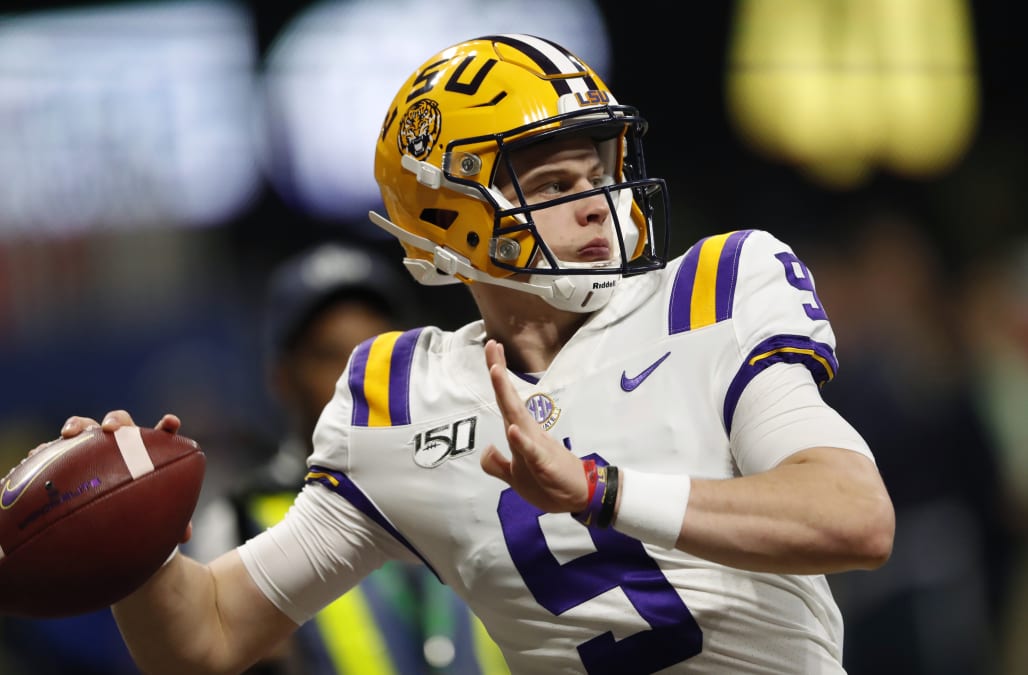 Here is more about each of the finalists:

The improvement from 2018 to 2019 for Joe Burrow has been remarkable. Burrow transferred to LSU from Ohio State ahead of the 2018 season and threw for 2,894 yards, 16 touchdowns and five interceptions while completing 57.8 percent of his passes in his first year as a starter. In 2019, in conjunction with LSU’s transition to a more spread-out, pass-happy offense, Burrow has flourished.

The senior led the Tigers to an undefeated regular season, SEC championship and No. 1 seed in the upcoming College Football Playoff. Along the way, he has put up ridiculous numbers. Burrow has thrown for 4,715 yards, an SEC-record 48 touchdowns and just six interceptions while completing a whopping 77.9 percent of his passes. Burrow’s touchdowns and completion percentage rank No. 1 in the country, while his passing yardage is second. And if the season ended today, Burrow would hold an FBS record for completion percentage in a season.

Burrow enters Saturday’s Heisman ceremony as the heavy favorite to win the award. Should that come to fruition, he would be the first LSU player to win the Heisman since Billy Cannon in 1959.

A heralded transfer from Georgia, Justin Fields has thrived in his first season at Ohio State. Like Burrow, he quarterbacked the high-flying offense of an undefeated team. The Buckeyes, in their first year with Ryan Day as head coach, cruised through the regular season with Fields getting better as the season progressed and the competition got tougher.

Fields finished the season with 302 yards and four touchdowns in a win over Michigan and 299 yards and three scores in the Big Ten championship game victory over Wisconsin. Overall, Fields, a sophomore, has thrown for 2,953 yards while completing 67.5 percent of his passes. But the stat that sticks out most is his 40-to-1 touchdown-to-interception ratio. He has also rushed for 471 yards and 10 more scores on the ground.

Jalen Hurts is the third transfer quarterback on the list of finalists. Hurts was a standout at Alabama before the emergence of Tua Tagovailoa caused Hurts to leave Tuscaloosa. He landed at Oklahoma and has carried on the tradition of transfer quarterbacks to thrive under Lincoln Riley. Riley’s two previous quarterbacks — Baker Mayfield and Kyler Murray — won the Heisman before becoming the No. 1 pick in the NFL draft. Now Hurts is OU’s third consecutive Heisman finalist.

Hurts led Oklahoma to a Big 12 championship and another berth in the College Football Playoff where the Sooners will meet top-ranked LSU in the Peach Bowl. Though he has struggled with turnovers, Hurts has still put up big numbers. He enters the playoff with 3,634 yards and 32 touchdowns passing along with 1,255 yards and 18 scores rushing.

Chase Young is the first defensive player to get invited to New York since Michigan’s Jabrill Peppers finished fifth back in 2016. Young has been the most dominant defensive player in the country on a week-to-week basis. The junior leads the nation with 16.5 sacks and is tied for third with 21 tackles for loss, and he put up those numbers in just 11 games.

Young was especially instrumental in Ohio State’s wins over Wisconsin and Penn State. Young leaped into the conversation following his performance against the Badgers. He finished that afternoon with six tackles, five tackles for loss and four sacks. Weeks later against Penn State, Young went for nine tackles, four tackles for loss and three sacks in the game that clinched the Big Ten East for OSU.

The Heisman is historically an award catered toward offensive players. Charles Woodson became the only defensive player to win the Heisman back in 1997. Aside from Woodson, only two players have finished as the runner-up: Notre Dame linebacker Manti Te’o (2012) and Pittsburgh defensive lineman Hugh Green (1980). In addition to Green, only five defensive linemen have finished in the top five of voting with Ndamukong Suh being the most recent in 2009. Now Young has joined that elite group.

Some of the notable snubs include the top three rushers in the nation: Oklahoma State’s Chuba Hubbard, Wisconsin’s Jonathan Taylor and Ohio State’s J.K. Dobbins.

Hubbard leads the nation with 1,936 rushing yards and can become the second player in Oklahoma State history to rush for 2,000 yards in a season, joining 1988 Heisman winner Barry Sanders. Hubbard has topped the 100-yard mark in all but one of OSU’s games and has gone for more than 200 yards four times this season.

Taylor finished sixth in Heisman voting as a freshman and ninth as a sophomore and has rushed for at least 1,900 yards in all three of his seasons. Now at 1,909 yards on the year (second-most behind Oklahoma State’s Chuba Hubbard), he can reach the 2,000-yard mark for the second straight season with at least 91 yards in the Rose Bowl against Oregon. Taylor is three yards away from becoming No. 4 all-time in rushing yards in NCAA history. Despite those numbers (in just three seasons) he will go a third year without being included in the Heisman ceremony.

Dobbins is third in the nation with 1,829 rushing yards and has been on a tear over the last handful of weeks. In Ohio State’s last three games, Dobbins has combined for 540 yards and seven touchdowns. Dobbins has rushed for at least 120 yards in nine of the 13 games he has played, including a 211-yard, four-touchdown outing in Ohio State’s win over Michigan.