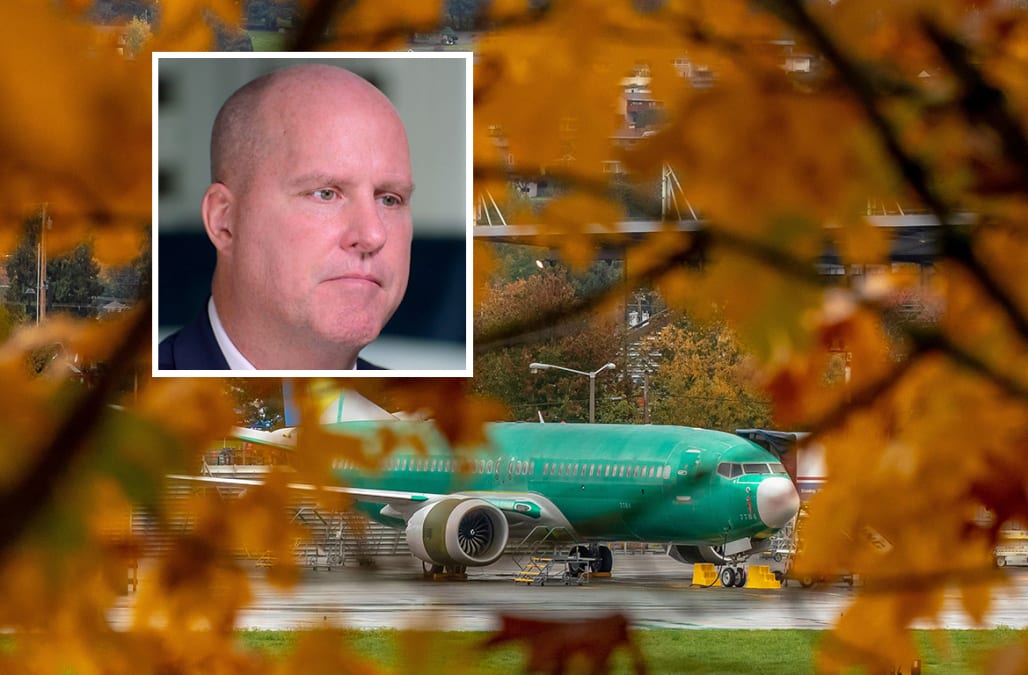 Speaking out for the first time, a former Boeing manager says he warned the company about problems at its main factory in Washington state in the months before two of its 737 Max airplanes crashed in separate incidents that claimed the lives of nearly 350 people.

The manager, Ed Pierson, spoke to NBC News in an exclusive television interview two days before he was set to appear before Congress to detail his efforts to sound the alarm over the conditions at the Boeing plant in Renton, Washington, where he said a push to increase production of the 737 Max planes created a "factory in chaos."

From the summer of 2018 to the spring of 2019, Pierson implored Boeing executives and then the FAA and NTSB to look into the conditions at the Renton plant, according to emails obtained by NBC News.

“Frankly right now all my internal warning bells are going off,” Pierson said in an email to Scott Campbell, the general manager of the 737 Max program, on June 9, 2018. "And for the first time in my life, I’m sorry to say that I’m hesitant about putting my family on a Boeing airplane."

For more on this story, tune in to NBC Nightly News with Lester Holt tonight at 6:30pm ET/5:30pm CT or check your local listings.

Pierson offered a recommendation huge in scope and consequences: shut down the production line for a limited amount of time. He said he believed the workers needed a more stable environment to finish building the planes already in progress.

The advice to shut down production went unheeded. Four months later, a 737 Max built at the Renton plant plunged into the sea near Indonesia. All 189 people aboard the Lion Air flight were killed in the October 2018 crash.

“I cried a lot,” Pierson told NBC News. “I’m mad at myself because I felt like I could have done more.” Pierson kept up his efforts to draw attention to the plant in the aftermath of the Lion Air crash. He wrote emails to Boeing CEO Dennis Muilenburg and spoke with the company’s general counsel. Dissatisfied by the responses, he wrote to the Boeing board of directors on February 19, 2019.

“I have no interest in scaring the public of wasting anyone’s time,” Pierson wrote. “I also don’t want to wake up one morning and hear about another tragedy and have personal regrets.”

Tragedy struck again 19 days later. On March 10, 2019, a 737 Max crashed in Ethiopia, killing all 157 people aboard the Ethiopian Airlines flight.

“This was a last resort,” Pierson said, referring to his decision to speak to the media. “I really had hoped that by providing information to the right people, and following the protocols and the chain of command every step of the way, I thought people would do their job.”

“I didn’t expect to get this far,” added Pierson, a Navy veteran who worked at Boeing for eight years. “But I don’t think I have any choice.”

No conclusive evidence has emerged linking the crashes to the problems Pierson said he observed at the Boeing plant in Washington. Boeing has acknowledged that the planes' anti-stall software system contributed to both crashes.

But Pierson's efforts to sound the alarm, which have not been previously disclosed in detail, add fresh questions to the inquiry into whether Boeing was reckless in its push to roll out the doomed 737 Max planes.

The planes have been grounded amid the ongoing investigations.

In a statement, Boeing defended its handling of Pierson's attempts to draw attention to the plant, saying his concerns "received scrutiny at the highest levels of the company."

"Although Mr. Pierson did not provide specific information or detail about any particular defect or quality issue, Boeing took his concerns about 737 production disruption seriously," Boeing said.

But Boeing stressed that it has no reason to believe issues at the factory played any role in the crashes.

"Importantly, the suggestion by Mr. Pierson of a link between his concerns and the recent MAX accidents is completely unfounded," it said. "Mr. Pierson raises issues about the production of the 737 MAX, yet none of the authorities investigating these accidents have found that production conditions in the 737 factory contributed in any way to these accidents." A former Navy squad commander, Pierson joined the team producing the 737 Max planes in April 2015. By then, Boeing was already under the gun.

The aircraft maker’s chief competitor, Airbus, had gotten a head start on its new class of planes designed to use less fuel and cost less to operate.

Pierson said he first noticed signs of trouble in the plant in late 2017. Boeing was pushing to increase the production of 737 airplanes at Renton from 47 to 52.

The delay in parts caused a slowdown in production that had to be made up. But the Renton plant didn’t have the manpower, Pierson said.

As a result, overtime hours piled up. Pierson said workers were putting in consecutive 50- to 60-hour work weeks without taking days off.

“I know people that worked more than five weeks in a row,” Pierson said, adding that he heard reports of some employees going eight weeks without a day off.

The supply chain delays, coupled with the tremendous time pressures, led to increasing amounts of what’s known as out-of-sequence work, Pierson said. Airplanes are marvels of design and engineering. Every part serves a specific purpose and every plane is supposed to be assembled according to a specific plan.

But at the Boeing plant in Renton, Pierson said, some of the steps were being performed at places and times different than the initial plans. He grew increasingly concerned that a corner might be cut or a crucial step overlooked.

"For the airplane, you want to build it a certain way," said Pierson. "I don't know of any work that's more detailed."

He likened out-of-sequence work to building a house and deciding after the floors were put down to rip them up to finish electrical and plumbing work.

Pierson said the problems were compounded by other management decisions that he said prioritized speed over safety.

Company executives canceled the daily meetings among individual teams that Pierson considered crucial to information sharing between shifts, he said. Boeing leadership replaced these “tiered” meetings with a larger meeting in which managers were often put on the spot to answer why they weren’t hitting production goals.

By May of 2018, the situation was spiraling out of control, Pierson said. No matter how many hours people worked, they struggled to keep up with the push to complete more than 50 airplanes a month.

“It just became full speed out of control," Pierson said. "The sheer volume was just overwhelming.”

Pierson wrote the email to Campbell a month later.

The pair also spoke in person. During the meeting on July 18, Pierson said he ticked off a series of problems at the plant and repeated his position that it should be shut down for a limited window of time.

Pierson said Campbell insisted that wasn’t possible. “I kind of got mad and said, ‘You know, I've seen military operations shut down for a lot less safety concerns,’” Pierson recalled.

Pierson said he was stunned by Campbell’s reply. “He said, ‘Well, the military’s not a profit-making enterprise,'” Pierson said.

Campbell, who has since retired, could not be reached for comment.

Alarmed by his experience, Pierson decided to retire in August 2018. “I felt like I was abandoning the Titanic,” he said.

Lion Air went down near Indonesia two months later. “As soon as I heard it was a Max, my stomach just dropped,” Pierson said. “I knew a Max is a plane that's only been in service for a year or so. And I knew it had to be made some time in that timeframe.”

Pierson said he was lying in bed when he heard the news that a second Boeing 737 Max went down in Ethiopia in March 2019. “I actually screamed and my wife woke up,” he said. “I just couldn’t believe it.”

Just three weeks earlier, he had written to the Boeing board of directors imploring them to take action and saying he didn’t want to wake up one morning to the news of another crash. The FAA ordered a temporary grounding of the 737 Max three days after the crash of Ethiopian Airlines Flight 302.

Pierson, meanwhile, kept up his efforts to sound the alarm over the plant in Washington. After months of communications and what he described as “bureaucratic inaction and unexplainable delays,” an NTSB investigator finally contacted him.

Pierson described his concerns about how problems at the plant could have contributed to the crashes. He followed up with a letter outlining his concerns.

But the NTSB ultimately sent a letter stating it wasn’t going to look into the plant.

“Your client’s concerns fall outside the scope of the NTSB’s role in the 737 Max accident investigations,” the letter said.

Using public databases, Pierson identified 13 other safety incidents involving 737 Max planes produced at the factory during his time there. Pierson’s lawyer laid these out in a letter to the FAA this past September.

“The flying public is completely unaware of these other incidents,” the letter said.

In a statement to NBC News, the FAA said it “takes all whistleblower complaints seriously.”

“Our team has interacted on several occasions with Mr. Pierson and his attorneys about his allegations,” it said.

It pointed to a letter sent to Pierson on Nov. 25. “Your request to refer the information to the Indonesian and Ethiopian Investigators-in-Charge is appropriately directed to the NTSB, which leads the U.S. government's involvement in those accident investigations and manages the U.S. government's contact with the Ethiopian and Indonesian investigative authorities,” the letter said.

Investigators looking into the causes of the twin crashes have zeroed in on automated system, known as MCAS, that pushes the plane's nose down if the software senses it is going into a stall.

Crash investigators have said the system was triggered by bad data from the sensors.

In response, Boeing has worked to upgrade the system.

But Pierson says he's troubled by the focus on the design failure of the MCAS system.

"MCAS is a system designed to correct flight anomalies when they occur," Pierson plans to tell the House transportation and infrastructure committee, according to a draft statement obtained by NBC News. "It was not the first failure event that led to those crashes."

In his interview, Pierson stressed that he's not a disgruntled employee bent on bringing down Boeing. "I'm thrilled to have worked at Boeing," Pierson said.

He's speaking out in the hope that Boeing and the agencies investigating the crashes take a hard look at the conditions in the factory where he worked to potentially stave off another tragedy.

"I really figured that somebody would stop and we would resolve this," Pierson said. "I rang every alarm bell that I could."