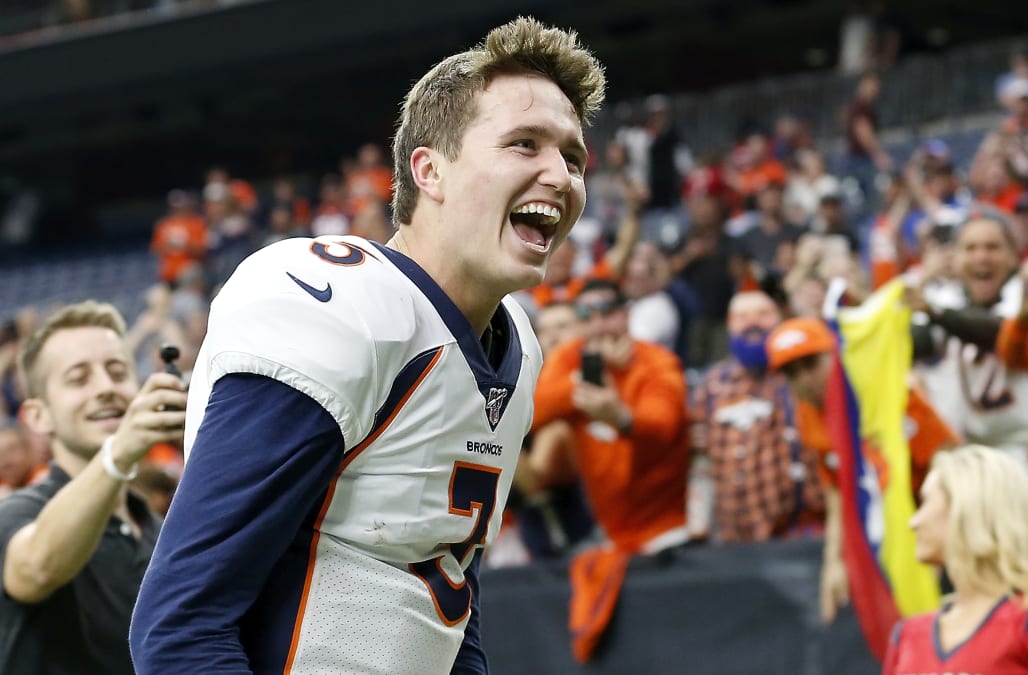 Denver Broncos rookie quarterback Drew Lock had one of the best days of any passer on Sunday, throwing for 309 yards and 3 touchdowns in a 38-24 win over the Houston Texans.

It just the second start of Lock's NFL career and an improvement upon his first start in Week 13, also a win, but with less gaudy and efficient passing numbers.

Lock had clearly prepared for the moment, including seeking advice from a past Broncos great: Peyton Manning.

According to Mark Kiszla of The Denver Post, Lock called Manning during the week to ask him how to prepare for his first road start.

"I texted him Monday and asked him when would be a good time to talk this week," Lock told Kiszla. "Because who better to talk to than Peyton Manning about going on the road in the NFL for the first time? I want to know what little things you can do to have an edge, and maybe mess with the defense a little bit."

Lock worked as a counselor at the Manning Passing Academy and is apparently close to the Manning family. According to Kiszla, when the Broncos drafted Lock in the second round of the 2019 draft, Archie Manning, the father of Eli and Peyton, texted Lock to welcome him to Denver.

It's unclear precisely what Manning told Lock about starting on the road, but it worked. Lock threw for 235 yards in the first half and helped get Denver out to an early 31-3 lead. They never looked back from there.

Lock made several impressive throws, including an early touchdown over the middle to rookie tight end Noah Fant.

He also dropped a 37-yard pass in the bucket to wide receiver Tim Patrick.

Broncos fans could understandably ask why Lock did not start until Week 13. The Broncos stuck with Joe Flacco for eight games until he went on the IR. They then turned to backup quarterback Brandon Allen for three games. Lock himself was on the IR and was eligible to return, but the Broncos kept him on the bench for logistical reasons. GM John Elway had also told Denver radio station KOA in October that he didn't think Lock was ready.

"The most important thing for a young quarterback is not to put him out there before he's ready ... It's a very tough thing because if you don't put him in a situation where he has a chance to be successful, and he's not successful, the whole roof will cave in," Elway said. "So we have to make sure that Drew is ready when he does get in there if he does get in there."

However, Lock grew antsy. In late November, NFL Network's James Palmer reported that Lock told the Broncos coaching staff that he was ready to start after getting more and more practice reps. He got his first start in Week 13.

After two wins, Lock appears to have won over the locker room. Broncos star linebacker Von Miller couldn't contain his excitement after the win over the Texans, telling reporters: "It was incredible. F---ing guy's a rock star ... He's on his way. I love that guy. It's going to be incredible."

Defenses, of course, will adjust to Lock, and he'll have to continue to stay sharp. He's got a pretty good mentor.

"Being able to have Peyton Manning as a resource, I don't even think you can put it into words how big it is," Lock told Kiszla.