After impressive win over Seahawks, are the Rams good again? 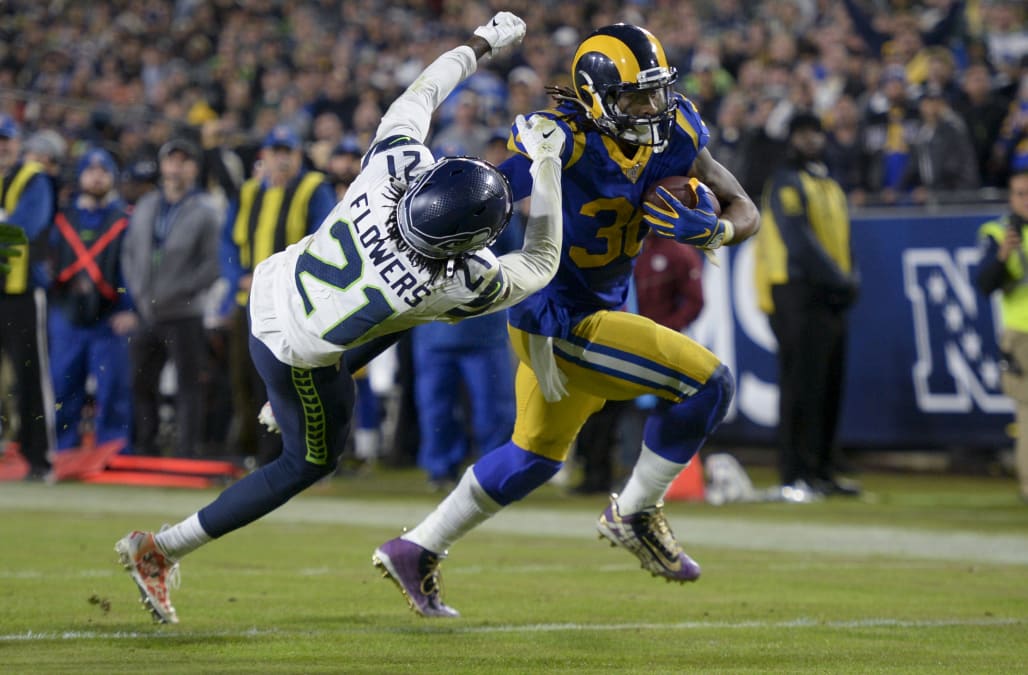 If you started watching this NFL season at about 8:20 p.m. Eastern time Sunday, and those small records on NBC’s score graphic at the bottom of the screen were covered up, you would have thought the Los Angeles Rams were among the Super Bowl favorites again.

Sunday’s 28-12 win over the Seattle Seahawks looked like the Sean McVay Rams we’re used to. Todd Gurley was sprinting through big lanes at the line of scrimmage. Jared Goff was spreading the ball around to his talented receivers. The defense had perhaps its best game of the year, practically making Lamar Jackson an MVP runaway favorite by shutting down Russell Wilson.

You’d have never guessed that the Rams have struggled most of the season, and are nowhere near contention in the NFC West, much less the NFC. But maybe it’s not too late for them to make the playoffs after all.

When the Rams lost 45-6 to the Baltimore Ravens on “Monday Night Football” a couple weeks ago, the Rams’ season and their NFC title defense looked finished. They were 6-5 and in a tough NFC the math for them to make the playoffs was pretty tough to figure out. More than that, the Rams looked nothing like a playoff quality team.

The last two weeks have been totally different. A blowout win over the Arizona Cardinals last week wasn’t proof that the Rams were back, but burying Seattle was impressive. Goff, who somehow didn’t throw a touchdown in November, has looked much more confident the past two games. It helps to have Gurley carrying the load again. Gurley had 113 total yards and a touchdown. Goff had 293 yards and two touchdowns. He also threw a pick-six, but the Rams were so good on Sunday night it didn’t matter.

The Rams still have a long way to go to make the playoffs, but at least they can see a path. If the Rams win out — their last three games are at Dallas, at San Francisco and vs. Arizona so that won’t be easy — and the Vikings lose to the Packers or Lions, the Rams would have a better NFC record and that would be the applicable tiebreaker. The next tiebreaker is record against common opponents, and the Rams have an edge there too. There are ways for the Rams to overtake the Vikings in the wild-card race even if Los Angeles loses another game, but winning out and getting a little help is the simplest path.

Winning out is the hard part of that equation for the Rams, but at least they’re still in the mix. That didn’t seem possible a couple weeks ago when the Ravens were bashing them on a Monday night.

Sunday’s loss wasn’t good for the Seahawks, but not as dramatic as it would seem.

Even though the 49ers won at New Orleans and are now a game ahead of the 10-3 Seahawks, the NFC West championship formula is uncomplicated for Seattle. If the Seahawks win out, including a game against the 49ers in Week 17, they win the division. The Seahawks would win the tiebreaker over the 49ers due to a season sweep. The Seahawks’ next two games are at Carolina and vs. Arizona, and they’ll be expected to win both. Win or lose on Sunday night, the Seahawks’ division title hopes would very likely come down to that Week 17 game either way.

There was more urgency for the Rams on Sunday night, and it showed.

Trading for Jalen Ramsey has helped the Rams secondary (though it didn’t matter much against Jackson and the Ravens a couple weeks ago). The pass rush is finally coming alive too, and the Rams harassed Wilson all night. Goff digging himself out of his slump has made the biggest difference. There was also the familiar creative play-calling from McVay on Sunday night, whether it was handoffs to receivers or giving Goff clear reads to throw to.

The Rams were one of the best teams in football over the last two seasons, and came close to winning a championship. A championship might not be in the Rams’ future this season, but anything can happen if they get in the playoffs. And the postseason is still a realistic dream after Sunday night.