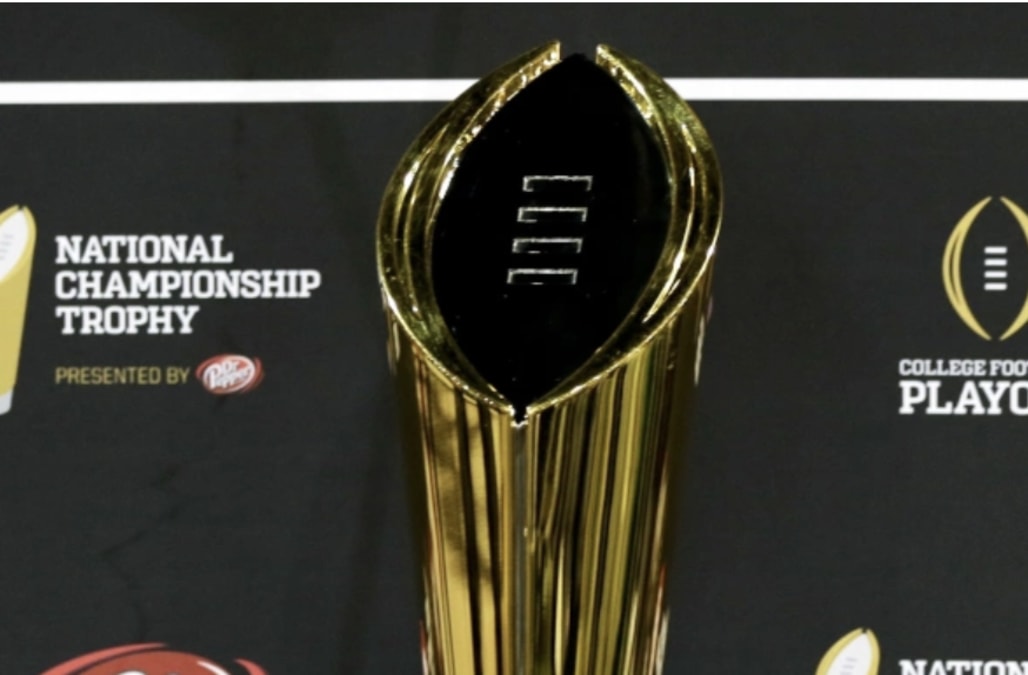 The only drama surrounding the four-team College Football Playoff field involved the seedings.

Oklahoma is the fourth and final team in the playoff and draws LSU. The Sooners made the playoff on the heels of a 30-23 overtime win over Baylor in the Big 12 title game. The winner of the Big 12 championship game had a clear path to the playoff after Utah’s loss to Oregon in the Pac-12 title game on Friday night and Georgia’s loss to LSU. The Utes entered the weekend ranked No. 5, a spot ahead of Oklahoma and two spots ahead of Baylor. Georgia was No. 4.

All four playoff teams rank in the top seven in the country in scoring offense.

The top three teams in the rankings are also undefeated. It’s the second straight season that’s happened after every team in the playoff field after the 2017 season entered with a loss. After Oklahoma grabbed the final spot with one loss for the second straight year, the playoff’s six-year run of never selecting a two-loss team also remains intact.

Burrow has thrown for 4,366 yards and 44 touchdowns while completing over 78 percent of his passes. Running back Clyde Edwards-Helaire has rushed for 1,233 yards on nearly seven yards a carry and has scored 16 touchdowns. Both Justin Jefferson and Ja’Marr Chase have over 1,000 yards receiving.

The Tigers are averaging nearly 45 points per game, the third-highest mark in the country.

Oklahoma is the lowest-scoring playoff team. Though that’s relative. Oklahoma comes in at No. 7 in scoring offense in 2019 and is averaging 41 points per game. The Sooners are led by former Alabama quarterback Jalen Hurts, who transferred to Norman as a grad transfer after the 2018 season. Hurts has completed 72 percent of his passes for 3.347 yards and 31 touchdowns while also rushing for 1,217 yards and 18 touchdowns. He’s got a chance to finish second to Burrow in the Heisman voting, though a spate of late-season turnovers may derail his chances at finishing as the runner-up.

LSU has the defensive edge, though Oklahoma’s unit has improved from where it was a year ago. The Sooners are giving up 10 fewer points per game in 2019 than they did in 2018. But the mark of 23 points allowed per game ranks outside the top 40.

The Tigers are giving up just over 20 points per game, a number that’s come down over the last two weeks. LSU allowed just seven points in the regular season finale against Texas A&M and 10 points to Georgia.

We’re betting this game will look a lot different than the 2016 Fiesta Bowl did. Three years ago, Clemson absolutely throttled Ohio State 31-0 on the way to a national title. This could end up being a semifinal that rivals the fun that was Georgia’s OT win over Oklahoma in the Rose Bowl after the 2017 season.

Ohio State should put up some points this year. The Buckeyes lead the country in scoring at nearly 49 points per game. Georgia transfer Justin Fields has fit seamlessly into first-year coach Ryan Day’s offense and the three-week break before the playoff should give his injured left MCL some time to heal. Fields has thrown for 2,654 yards and 37 touchdowns with just one interception all season. He’s also rushed for 470 yards and 10 scores.

Ohio State’s potent rushing attack goes through RB J.K. Dobbins. He’s averaging 6.6 yards a carry and has rushed for 1,657 yards and 19 touchdowns. Dobbins is just 143 yards away from having 2,000 combined rushing and receiving yards.

Clemson’s got a pretty good running back too. Travis Etienne is the ACC’s career rushing leader and has rushed for 1,386 yards and 16 touchdowns on just 168 carries. QB Trevor Lawrence has bounced back from a relatively slow start to throw for 2,870 yards and 30 touchdowns as Justyn Ross, Tee Higgins and Amari Rodgers form the best set of receivers among the four playoff teams.

In addition to being No. 4 in scoring offense in the country, Clemson is No. 1 in scoring defense. The Tigers are giving up fewer than 10 points per game in 2019.

That is, in part, because of the weakness of the ACC. It might have been the weakest Power Five conference in the country and that hurt Clemson as both Ohio State and LSU had opportunities to play and beat teams that were ranked in the top 15.

Clemson never really got that chance. Texas A&M was ranked at No. 12 when the Tigers beat the Aggies in Week 2, but A&M ended up finishing the season at 7-5. If you hate preseason rankings, you also can’t count that game as a significant ranked-team win for Clemson. Outside of that game, Clemson’s win over Virginia on Saturday night in the ACC championship game is the Tigers’ only other win over an opponent ranked at the time.

ALSO, the rest of the New Year’s Six bowl games were unveiled by the CFP selection committee.

Memphis emerged as the highest-ranked Group of Five champion after besting Cincinnati in the AAC championship game on Saturday. It marked the third consecutive season the Tigers played for the AAC title, but they lost to UCF the last two years. This time, however, Memphis scored a late touchdown to clinch the school’s first outright conference championship since 1969. However, it is not clear if Memphis will have head coach Mike Norvell on the sideline for this game. Norvell was announced as the new coach of Florida State on Sunday and he was noncommittal about whether he will coach the Tigers one final time.

Because Wisconsin was ranked ahead of Penn State in the final CFP rankings, the Badgers went to the Rose Bowl and Penn State fell to the Cotton Bowl as an at-large bid. Penn State opened the season with eight straight wins, including over ranked Iowa and Michigan teams. But the undefeated streak ended at Minnesota on Nov. 9. Still, PSU had a chance to win the Big Ten East but a comeback effort came up short in a 28-17 loss to Ohio State in Columbus. This appearance will be Penn State’s third New Year’s Six bowl game in the past four seasons, all under James Franklin.

Florida had another excellent season under Dan Mullen. The Gators are now 20-5 in Mullen’s two seasons and are now headed to the Orange Bowl for the first time since 2001. Florida opened the 2019 season with a 6-0 record, lost to No. 1 LSU in Baton Rouge and dropped the Cocktail Party to Georgia in a game that ultimately decided the SEC East. The Gators rebounded from that loss to win three straight down the stretch and can now get to 11 wins in a season for the first time since 2012.

With Clemson back in the College Football Playoff, Virginia gets the nod as the next highest-ranked ACC team. The Cavaliers won their first-ever ACC Coastal title by beating rival Virginia Tech in a game that snapped a 15-game losing streak in the series. Bronco Mendenhall has rebuilt the program over his four years in Charlottesville, going 2-10 in his first season. Virginia, which was blown out by Clemson in the ACC title game, now has the chance to reach the 10-win mark for the first time since 1989 while playing in its first New Year’s Six bowl game.

Oregon was an upset loss to Arizona State away from potentially being in the College Football Playoff. That loss pushed the Ducks out of the CFP conversation, but they were able to rebound in a big way by upsetting No. 5 Utah in Friday night’s Pac-12 title game. The win gave Oregon its first conference title since 2014 and will send the Ducks to the Rose Bowl for the first time since the 2014 CFP semifinal victory over Florida State. Oregon now has a 20-6 record in two seasons under Mario Cristobal.

Wisconsin finished the season playing at a very high level. The Badgers started the year 6-0, but dropped back-to-back games to Illinois and Ohio State in October. From there, Wisconsin closed out the regular season by winning four straight, including a 38-17 road win over No. 8 Minnesota to clinch the Big Ten West. That set up a Big Ten title game rematch with Ohio State. The Badgers surprisingly jumped out to a 21-7 halftime lead, but the Buckeyes stormed back to win 34-21. Still, the performance against Ohio State was enough to keep Wisconsin above Penn State in the rankings, sealing the program’s first spot in the Rose Bowl since the 2012 season.

Georgia could have clinched a spot in the College Football Playoff with a win over LSU in the SEC title game on Saturday, but the Bulldogs were thoroughly outplayed in a 37-10 loss. As a result, Georgia dropped from the No. 4 spot and will now play in the Sugar Bowl in New Orleans for a second straight season. Last season, a dejected Georgia team that narrowly missed the playoff lost to Texas. Will Georgia be more motivated this time around?

Like Georgia, Baylor entered the weekend with a chance of reaching the College Football Playoff. But the Bears dropped the Big 12 championship game to Oklahoma in overtime, opening the door for the Sooners to reach the CFP. Baylor is in just its third season under Matt Rhule, who has done a fantastic job reviving the program from the aftermath of scandal at the university. The Bears opened the year 9-0, but blew a big lead against Oklahoma on Nov. 16. They closed out the regular season with two more wins, but could not beat OU in the rematch. Baylor, playing in its first CFP-affiliated bowl since 2014, should still be plenty motivated playing in the Sugar Bowl for the first time since 1957.