The NFL tried to fine the Saints' Demario Davis for his 'Man of God' headband. Here's what happened next 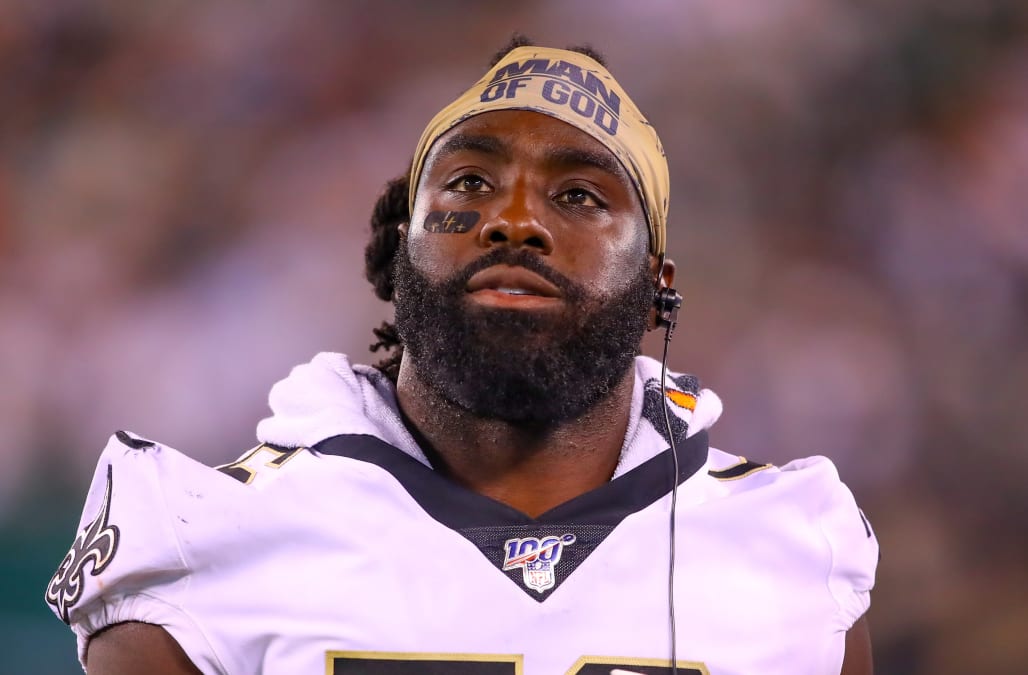 METAIRIE, La. — In late September, shortly after the New Orleans Saints' Week 3 win over the Seattle Seahawks, Demario Davis walked toward his stall in the Saints' locker room and noticed a white envelope on the black leather seat.

Davis knew it could be any number of things, including a fine. So when he slid the envelope open and read what was inside, he wasn't surprised he was being docked $7,017 for a uniform violation.

The piece of clothing that caused him to get fined? Yeah, that was a surprise.

"I was like, why did I get fined?" Davis told Yahoo Sports on Friday. "And they were like, it was a fine for my headband. And I was like, 'What? I got fined for that?'"

Davis' custom gold headband — inscribed with "Man of God" in large block letters — has special meaning for the 30-year-old linebacker, a deeply religious man with a track record of good works and social consciousness as long as his mounting on-field accomplishments.

He knew the NFL had a stringent uniform code — the league prohibits players from "wearing, displaying, or otherwise conveying personal messages" during gameday events, and it actually pays people to watch each game closely for violations — but he was surprised he was being docked for the headband, nonetheless.

"I had been wearing it all year, even since the preseason," Davis recalled with a chuckle. "And I was like, ‘Yo, that's crazy that I just got fined for repping what I believe in.’"

Davis says he didn't necessarily feel he was being slighted by the NFL for the fine — he thinks it was just enforcing the policy that was in place. Nevertheless, he went to his agent, who told him they could appeal on the grounds Davis didn't fully understand the rule and the headband wasn't visible on the field. His agent also asked Davis if he planned on wearing it again, to which Davis said he did not, since he wasn't intentionally trying to buck the rule.

But something funny happened before the appeal was ruled upon; the reason for Davis' fine went viral. Fans caped for his cause, the NFL endured criticism, and the support Davis got on social media — and via snail mail — was ridiculous.

"My locker used to be, like, full of stuff," Davis told Yahoo Sports. "And I still get stuff, of people just like thanking me for repping my faith and being strong."

Davis thinks that enormous amount of fan support played a role in the league's decision in early October to rescind the fine, one that Davis did not see coming.

"Yeah, most times they don't overturn something like that," Davis said. "So I just like to think that was the power of God working behind the scenes, man."

And when it did, Davis sensed an opportunity to back up the headband's meaning through his actions. So he donated the entirety of the $7,017 fine, plus the $30,000 generated from the sale of the $25 headbands on his Instagram page to St. Dominic Hospital in Jackson, Mississippi, where his mother once worked.

Two months later, Davis says he has sold nearly 9,000 headbands, totaling nearly $150,000 in profit which — when you consider the equal-matching grant given to the hospital, which is hoping to expand its emergency department — brings the total donations to a mind-blowing $300,000.

"It's crazy, it's amazing," Davis told Yahoo Sports, shaking his head at his locker on Friday. "God is good. Three-hundred thousand dollars, man? Come on, man!"

In retrospect, Davis realizes he shouldn't be surprised at the way this has turned out.

"That's just the power of God, man — he takes negative situations and use them for positives," Davis said. "You notice like, people in the bible — God doesn't look for the best or the biggest; he looks for the person who has been counted out. God is the king of taking bad situations and turning that into a positive."

Davis knows plenty about that. In his youth, he struggled with marijuana and alcohol, and found himself in jail for three days a decade ago as a freshman at Arkansas State after an arrest for stealing groceries from a Walmart. Davis' college coach gave him another chance, and it was an ensuing conversation with the team chaplain that helped him look at his life differently.

"He helped me understand that we are all born with a bad heart, and that ruined my misconception we all have a good heart," Davis said. "Like, we all like to think we're good people at the end of the day, but what I realized is, no, we're all messing up and doing bad stuff because we're really bad and we need a new heart. But God will give you that."

Since then, Davis says he has devoted his life to, in his words, "being a billboard for Christ" with his actions. A year ago, Davis — a member of the NFL's Players Coalition — pushed for a bill that restored the right to vote to convicted felons in Louisiana (which was eventually signed into law), and in March, he helped raise money for Flint, Michigan, to combat the water crisis that has received national attention.

In August, he helped pay the bail of an immigration activist in California, and just this week, he teamed up with defensive end Cam Jordan and other teammates to present a $50,000 grant to a charter high school in New Orleans that's dedicated to teaching students skills they need in the tech industry.

What's more, on Sunday he'll be wearing a custom pair of Jordan XI cleats — with the NFL's approval, thanks to the league's "My Cause, My Cleats" campaign — touting the nonprofit he started with his wife in 2013 called "Devoted Dreamers," which is dedicated to giving kids the tools they need to be successful spiritually, mentally and physically.

"I remember coming up, the guy I looked up to was selling drugs, chasing girls, trying to prove they were the baddest, and that's the type of things that I chased after," Davis said. "So [I want] to show them, man, that you can still be cool and relevant and love God, love your family, be an upstanding man in the community and play ball and not feel like that's corny. Giving them something positive to emulate, that's what it's about."

For all of Davis' good works, the fact remains his celebrity took the biggest turn this fall thanks to his Pro Bowl-worthy play on the field — he's in the midst of a career year — and his "Man of God" headband flap with the NFL. When people see him on the street in New Orleans now, they notice who he is.

"They'll be like 'Oh man, that's the man of God right there!'" Davis recalled with a laugh. "That happens all the time, and they'll ask me where they can get the headbands."

Davis, a team captain for the Saints, loves the fact that people recognize him for being associated with his faith. But it's a position that comes with a great sense of responsibility.

And while he no longer wears the "Man of God" headband on the field (in accordance with NFL rules), he's always got something on his body that reminds him of his purpose. On this Friday, he's wearing a black rubber "Man of God" wristband, in addition to a cross around his neck.

Davis insists his faith is not about objects, it's about acts. He figures that if "Man of God" is written on his forehead by the way he lives his life, he doesn't even have to rep the headband on the field for people to know what he's about.