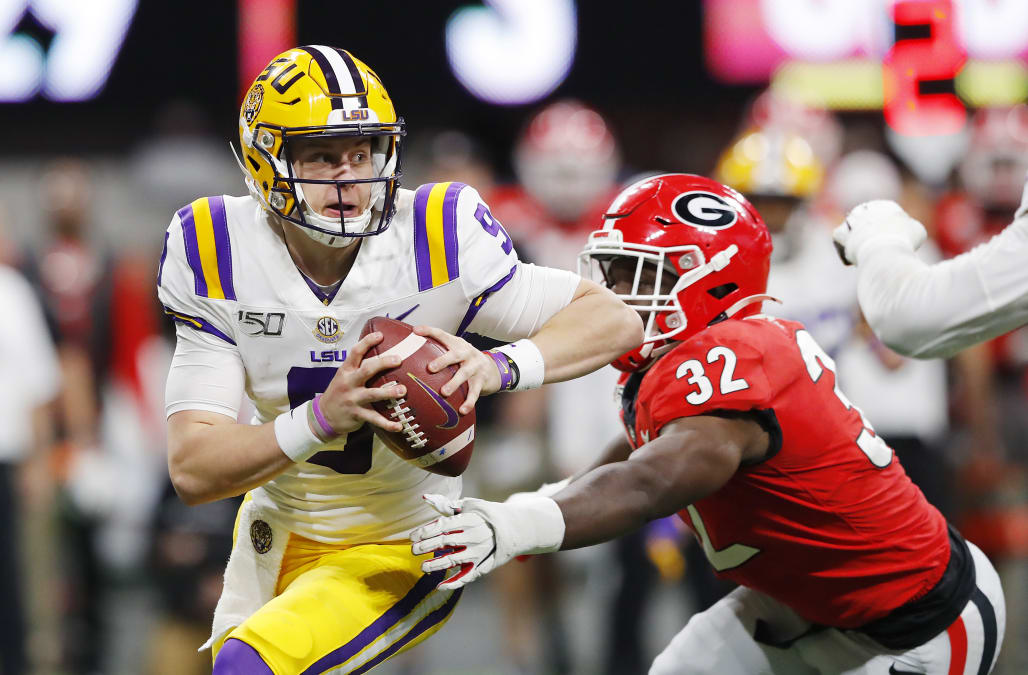 At an SEC championship game that was a game in name only, LSU annihilated No. 4 Georgia 37-10 in a performance that was part domination, part audition. Seeded No. 2 in the College Football Playoff rankings coming into the game, the Tigers — thanks to a phenomenal Joe Burrow-led offensive attack and an opportunistic defense — made the case that they ought to be No. 1 in the final iteration of the rankings.

The game kicked off before a heavily partisan, Georgia-leaning crowd, which isn’t surprising. Athens is only 60 miles up the road from Mercedes-Benz Stadium, and LSU fans knew long before this weekend that they’d need to buy tickets for at least one higher rung on the playoff ladder.

Each team’s opening drive ran pretty much like a worst-case scenario for Georgia. Fromm and his receivers couldn’t connect on Georgia’s first possession, with passes both dropped and overthrown. Burrow, meanwhile, had enough time in the pocket to grab a nap, dissecting Georgia’s defense on an array of quick slants and digs before finding Ja’Marr Chase in the end zone for a gorgeous, efficient 23-yard touchdown pass.

That touchdown gave Burrow the SEC’s single-season record for touchdowns with 45 and it staked LSU to a lead it would never relinquish. He finished 27-of-37 passing for 347 yards and four touchdowns in what could and should be his final football game without being known as a Heisman Trophy winner.

Nine minutes after the first, Burrow added another touchdown, this one to Terrance Marshall Jr. to close a five-play, 65-yard storming of the end zone. Georgia’s legendary bespectacled kicker Rodrigo Blankenship hit only one of two field goal attempts, and by halftime the Tigers were up 17-3 … a score that could, and should, have been so much worse.

Georgia had its chances. LSU’s pass defense could charitably be called “casual,” but Fromm couldn’t find his receivers at the right moments. On the other side of the ball, Marshall dropped a wide-open, fallen-defender, dead-bang-certain 70-yard touchdown pass midway through the second quarter that would have put LSU up 21-3.

As if the day couldn’t get any worse, Georgia fans got a brief scare when Fromm exited the game following a vicious sack from an untouched Grant Delpit. Fromm returned to the game the next series … and promptly threw an interception right into the hands of Derek Stingley Jr.

Fromm, who’s looked mortal most of the last month, couldn’t overcome the absence of WRs Lawrence Cager (out the rest of the season with an injury) and George Pickens (out the first half for fighting last week).

In the second half, Georgia began to adjust. But it was far too late. The defense began bringing more pressure on Burrow, cutting down on his hours-long time in the pocket, recording their first sack of the game and holding LSU to a field goal on a first-and-goal from the 3.

Pickens sparked the offense in his return to the field, most notably with an 18-yard gallop in the third quarter that included an almost-brilliant hurdle. But that drive also ended in another missed Blankenship field goal. It was there that the last of the Bulldogs’ playoff hopes flickered and died because on the very next series, Burrow created one of the strangest, prettiest plays of the entire college football season.

Flushed right out of the pocket, Burrow leaped and threw the ball to an open spot 43 yards downfield and Justin Jefferson crossed the entire field to meet it there. Jefferson then added another 28 yards of broken-field running, setting up what would be the backbreaking touchdown to put LSU up 27-3.

An interception on Georgia’s next possession, and another LSU touchdown shortly afterward, sent all but the Bulldog diehards home for the night. Georgia’s got one more game on the slate, and it could very well be the Sugar Bowl again. But it’s no College Football Playoff.

LSU, meanwhile, gets three weeks to rest up for its next opponent. It may return to Atlanta for the Peach Bowl or it may travel to Arizona for the Fiesta Bowl. It may draw Clemson in a No. 2 vs. No. 3 matchup, it may get the chance to tee off on Oklahoma. No matter what, LSU ought to be the favorite in every game it plays from here on out.