This professional snowmobiler is transforming prosthetics 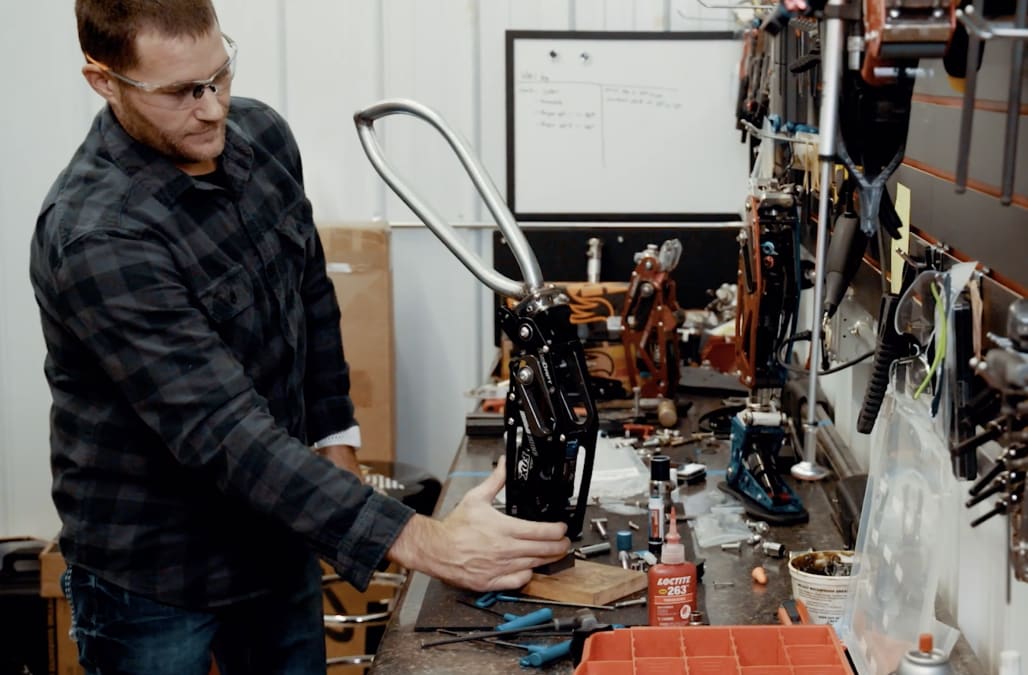 Sport of Tomorrowis an immersive dive into the technology powering today’s sports revolution. Whether it be making the game safer, more intriguing for viewers or simply improving skills, technology has forever changed the way we watch, play and consume sports. Come back every Sunday to learn about the most innovative trends in the sports industry.

In 2008, professional snowmobiler Mike Schulz was halfway through a race in Minnesota when his vehicle hit a hole and started skidding from side to side. Unable to maintain control of the snowmobile, he was immediately thrown off.

"I couldn't ride out of it, and it pitched me off to the left side," he told In The Know. "Feet impact the ground, and my left knee buckles 180 degrees. It's unbearable pain, and my foot is actually laying on top of my chest."

Schulz was taken to a hospital in Duluth, where a doctor told him the injury had severely affected the circulation in his left leg. The best course of action, the doctor said, was to amputate the leg three inches above the knee.

"He's like, 'In order for you to survive at this point, we're going to need to take your leg," Schulz recalled.

After undergoing surgery and recovering at the hospital for the following 13 days, Schulz proceeded to consult a prosthetist, who, in turn, gave him an artificial leg.

"Watching my feet go in front of me as I'm walking across the room, I mean it feels good, like I feel normal," he said.

Although Schulz' accident initially scared him away from riding bikes and snowmobiles, he couldn't resist going on one more ride, he said. One day, he made an excuse to use his snowmobile. Upon doing so, Schulz found himself reliving — and more importantly, enjoying — the thrill of riding in the snow.

"I hopped on my snowmobile and went for a little cruise and, you know, it made me smile to get out and smell that two stroke smoke," he said.

Still, Schulz knew that the prosthetic he was given wouldn't allow him to comfortably continue his passion. When he learned that X Games also hosted races for amputees and paraplegics, he became increasingly interested in creating a specialized high-impact prosthetic that would allow him to participate in extreme sports.

"From what I gathered, all the other riders were just using their everyday equipment ... and I'm like, 'Huh, I think I can fix this,'" he said.

In 2010, Schulz founded BioDapt, which manufactures high-performance prosthetics, after successfully building a prototype to use while riding a motocross bike. The company currently has two signature products: the Moto Knee and Versa Foot 2. The former is an adjustable knee system; the latter is a prosthetic foot for above- and below-knee amputees. Both are made of aluminum and incorporate stainless steel fasteners for use in mud and water. They also consist of a mountain bike shock that helps minimize impact on the amputee's leg.

"When I started designing the Moto knee, I knew I wanted to be versatile for a lot of different sports and activities, so I tested it with motocross, mountain biking, road biking, wakeboarding, horseback riding, snowboarding, skiing," he told In The Know. "Adaptation to me means using tools to bridge a gap."

Schulz, who has since won several gold medals at the X Games and the Paralympics in multiple sports, added that one of his biggest highlights took place last year. Nine athletes at the Paralympics purportedly used his company's products and came away with 11 medals. Yet, perhaps just as equally important to Schulz is the message his personal story and company are conveying.

"Being able to adapt either mentally, physically to something is what sets people apart from others," he said. "Like of course, I didn't want them to amputate my leg, but the bigger picture of it was I understood it was going to save my life."