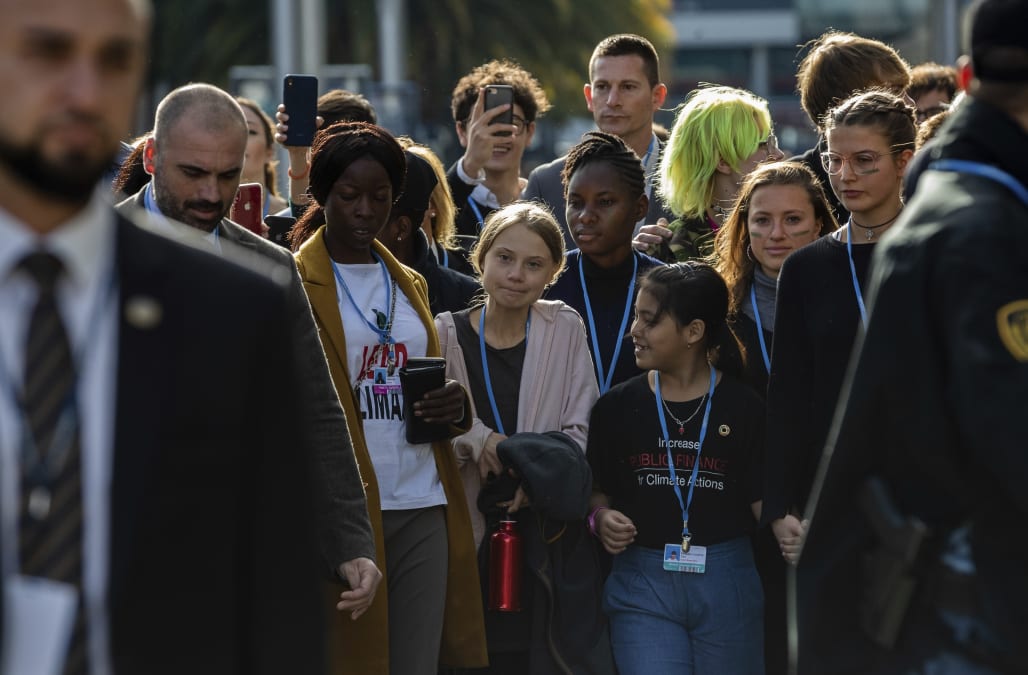 After making it through a swarm of media cameras and microphones at the Spanish capital's northern train station, the Swedish teen posted an ironic tweet saying that she had “successfully managed to sneak into Madrid.”

Madrid is hosting two-week, United Nations-sponsored talks aimed at streamlining the rules on global carbon markets and agreeing on how poor countries should be compensated for destruction largely caused by emissions from rich nations.

The talks came as scientific evidence mounts about disasters that could ensue from further global warming, including a study commissioned by 14 seafaring nations due to be published Friday predicting that unchecked climate change could devastate fishery industries and coral reef tourism.

Thunberg paid a surprise visit to the venue of the talks and joined a group of some 40 teens staging a sit-in there to demand real action against climate change.

Holding hands, the teens sang a version of John Lennon's “Power To the People” and displayed banners with the logo of Fridays for Future, the global climate movement inspired by Thunberg.

Thunberg did not appear unsettled by the commotion surrounding her presence.

"It's absurd. I laugh at it. I do not understand why it has become like this," the 16-year-old was quoted as saying by Swedish newspaper Aftonbladet, whose reporter rode with them in an electric car in Madrid.

While Thunberg seemed bemused by the attention, her father Svante was startled, saying it was “total madness.”

“I have never seen anything like this,” he told Aftonbladet.

The study commissioned by seafaring nations says climate change could cause hundreds of billions of dollars in losses by 2050, adding that limiting global warming would lessen the economic impact for coastal countries, but that they also need to adapt to ocean changes.

The presence in Madrid of Thunberg is expected to shift the attention to demands for greater action by non-governmental organizations and a whole new generation of environment-minded activists.

Past appearances have won her plaudits from some leaders — and criticism from others who’ve taken offense at the angry tone of her speeches.

An advocate for carbon-free transportation, Thunberg traveled by train overnight from the Portuguese capital, Lisbon, where she arrived earlier this week after sailing across the Atlantic Ocean from the United States by catamaran.

That became necessary after a sudden change of venue for the COP25 summit following a wave of anti-government protests that hit Chile, the original host.

Separately Friday, an alliance of American states, cities, academic institutions and companies opened its own venue at the U.N. climate talks, aiming to show that despite the federal administration's decision to pull the U.S. out of the Paris accord, many Americans remain committed to the treaty's goal of curbing global warming.

Elan Strait, who manages the “We Are Still In" initiative for the environmental conservationist World Wildlife Fund, said the movement is “a short-term band-aid not only to get those carbon dioxide emissions down but also to encourage policymakers to lay the ground for further achievements.”

“And that, regardless of the color of the government that is in power,” Strait said.

Over 3,800 organizations and corporations representing 70% of U.S. economic output have joined the coalition, organizers claim, amounting to roughly half of the country's emissions.

The U.S. Climate Action Center is hosting Mandela Barnes, the lieutenant governor of Wisconsin; Pat Brown, the chief executive of non-meat burger company Impossible Foods; Bill Peduto, the mayor of Pittsburgh; and others.

The venue is funded by Bloomberg Philanthropies, a charitable organization founded by billionaire businessman and former New York City mayor Michael Bloomberg, who is now seeking the Democratic nomination to run in the 2020 U.S. presidential election.