NFL POWER RANKINGS: Where every team stands heading into Week 14 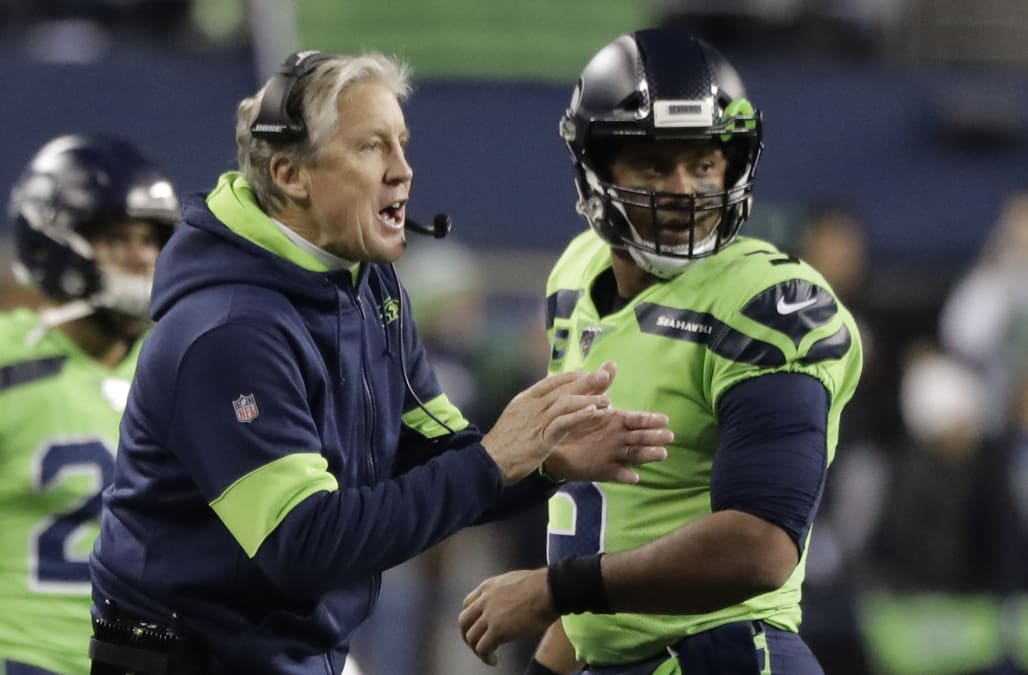 There are just four weeks remaining in the NFL regular season, and the competition at the top of the league could not be tighter.

Five teams — the Saints, Ravens, Seahawks, Patriots, and 49ers — sport a record of 10-2, and are likely locks for the playoffs, though the fight for a bye week remains fierce. Below them is a hodgepodge of teams that could either fall of the grid or make a run at the top of their conference through their final four games.

With so little football left to be played, the race for the postseason will only continue to heat up. Check out where all 32 teams stand in our power rankings below.

One thing to know: The Giants have now lost eight straight games, having not won since a Week 4 home game against Washington. The New York Mets have a more recent win than Daniel Jones and company.

One thing to know: The Bengals picked up their first win of the season, allowing just two field goals to a Jets offense that had scored 34 points in each of their last three games.

One thing to know: Washington has now won two straight games thanks in part to a huge day from running back Derrius Guice. After his selfie debacle in their win over the Lions, rookie quarterback Dwayne Haskins was sure to be on the field to take the final kneel-downs for his team this past Sunday.

One thing to know: The usage of Le'Veon Bell, the Jets' $13-million-a-year running back, has been a mystery. In Week 13, Bell had just 10 carries, and since Week 8, he is 11th among running backs in total touches, a surprising number for a highly paid player.

One thing to know: After turnovers on their first three possessions, the Jaguars decided to bench quarterback Nick Foles in favor of rookie Gardner Minshew, who had played well in Foles' previous absence. Minshew is now likely the starter for the rest of the season, leaving Jacksonville with an expensive decision to make this offseason.

One thing to know: The Cardinals have lost five straight. Over that stretch, they've played some of the best run defenses (49ers, twice, Bucs, Rams) and have had trouble running the ball, putting more pressure on Kyler Murray.

One thing to know: The Miami Dolphins were once a threat to go 0-16, but in recent weeks have shown plenty of fight, including pulling off the trick play of the year against a flustered Eagles defense. Credit to head coach Brian Flores for keeping his players focused and motivated despite their poor start to the year.

One thing to know: Kicker Younghoe Koo was the star of Week 13, as he nailed three straight onside kicks (one of which was called back because of a penalty) and gave the Falcons a chance at an improbable comeback. Unfortunately, Atlanta's offense couldn't capitalize.

One thing to know: Undrafted rookie David Blough made his NFL debut on Thanksgiving day against the Bears, and almost pulled off a miracle. With fellow backup Jeff Driskel heading to the IR, Blough is the likely starter in Detroit for the remainder of the season.

One thing to know: The Chargers are 4-8 and have a positive point-differential of +3, better than 15 other teams. The Chargers continue to lose like no other team in the league.

One thing to know: Drew Lock got the first win of his career on Sunday in his debut against the Los Angeles Chargers thanks to a 53-yard field goal from Brandon McManus as time expired. Have the Broncos finally found their quarterback?

One thing to know: Fantasy owners must be frustrated with Bruce Arians. Less than a month after naming Ronald Jones the starting running back, Arians benched Jones for missing a blitz pickup. Peyton Barber instead got 17 carries for 44 yards and 2 touchdowns.

One thing to know: Cleveland Browns head coach Freddie Kitchens caught flak over the weekend after being pictured wearing a shirt that read "Pittsburgh started it," about the brawl between the teams just two weeks ago. On Sunday, the Steelers responded with some shirts of their own and went on to win the rematch 20-13.

One thing to know: While a lot of attention goes to Kyle Allen's struggles, the Panthers defense is perhaps more responsible for a bad Week 13 loss to Washington. Carolina's league-worst run defense allowed Derrius Guice and Adrian Peterson to combine for 228 yards and 3 touchdowns on just 23 carries.

One thing to know: After a surprisingly successful start to the season, the Raiders have fallen apart in the past few weeks, outscored 74-12 against the Chiefs and Jets in their past two games. Hopefully, a trip back home to Oakland will cure the Raiders woes.

One thing to know: Jacoby Brissett has not been as sharp since returning from an injury in Week 11. Over his last three games, he's completed nearly 63% of his passes, but for just 596 yards, 6.4 yards per attempt, 2 touchdowns, and 3 interceptions. The Colts are 1-2 since he's returned.

One thing to know: With their win against the Lions, the Bears are still alive for a spot in the postseason, but they'll have to win games against the Cowboys, Packers, and Chiefs in the coming weeks if they're to make a run. Best of luck!

One thing to know: The Eagles' loss to the Dolphins was among the worst for any playoff-hopeful team has had all year. Philadelphia has lost three in a row but has managed to stay in the playoff race because the Cowboys have also lost three of four.

One thing to know: Jerry Jones was reportedly in tears coming out of the Cowboys locker room after their Thanksgiving loss to the Bills. If Dallas doesn't turn things around soon, it's likely head coach Jason Garrett will be looking for a new gig next season.

One thing to know: Few would have guessed when Ben Roethlisberger went down in Week 2 that the Steelers would be in the thick of the playoff race with a quarterback named Duck Hodges under center, but here they are. Credit Mike Tomlin and a ferocious defense for keeping the season alive.

One thing to know: After a season of lackluster starts, the Los Angeles Rams finally looked like the team that dominated the NFL last season en route to a Super Bowl berth, with Jared Goff throwing for 323 in the first half alone. With the Seahawks and 49ers battling atop the NFC West, the Rams will have to keep that momentum rolling if they hope to steal the second wild-card spot in the conference.

One thing to know: The Titans have won five of their last six and look like a scary team to face in the AFC Wild Card. Perhaps most impressively, they have averaged 29.6 points per game over that stretch after averaging just 16.3 over their first six games.

One thing to know: With the Chiefs win against the Raiders on Sunday, head coach Andy Reid moved to an impressive 18-3 record in games following his team's bye week. If you're playing against Kansas City, you better hope he doesn't have extra time to prepare.

One thing to know: The Bills picked up perhaps their most impressive win of the season by going on the road, on a short week, and beating the Cowboys. The Bills are just one game out of the division lead, but face a tough schedule the rest of the way.

One thing to know: The Vikings are still alive in the NFC playoff race, but down the stretch, they'll need to get healthy, particularly on offense, as Adam Thielen missed Week 13 and Dalvin Cook is now battling a shoulder injury.

One thing to know: Deshaun Watson was clearly delighted to have finally bested Tom Brady is his third attempt to take down the Patriots. "As far as big wins, honestly, it's pretty big," Watson said after the game. "Really, just because it's Brady ... That's my role model, a guy that's been doing it forever."

One thing to know: This was the first Patriots loss in a while that felt troubling. Their offense continues to underwhelm (they scored some late touchdowns to make it look closer than it was), as Tom Brady continues to look like a 42-year-old with nearly 10,000 career pass attempts. How much can the defense carry the team?

One thing to know: With the Vikings losing on Monday night to the Seahawks, the Packers have a clear path to the NFC North title. Still, to ensure they don't have to play during wild-card weekend, Green Bay will likely need to win at Minnesota in Week 16.

One thing to know: The Saints' Week 14 showdown with the 49ers is a compelling matchup. The Saints look like one of the most well-rounded teams in football, but they've climbed to a 10-2 record against a mostly easy schedule. Are they ready to beat the No. 1 team in the NFC?

One thing to know: The 49ers have lost just two times this season, with the Ravens and Seahawks both besting them with the help of a game-winning field goal as time expires. But even though they've never trailed with one second remaining in the fourth quarter, San Francisco would be a wild card team if the season ended today.

One thing to know: Seattle currently holds the top spot in the NFC West thanks to their head-to-head win over San Francisco. That said, a Week 17 rematch against the 49ers could be the deciding game for both the division and a first-round bye in the postseason.

One thing to know: On a day when the 49ers mostly stifled Lamar Jackson and the Ravens' pass game (Jackson still had 101 rushing yards), Justin Tucker came through, hitting a 49-yard, game-winning field goal. The Ravens have won eight in a row.

(AP Photo/Julio Cortez)
Up Next

Now check out our picks for the best NFL plays of the decade...

The 19 greatest NFL plays of the decade