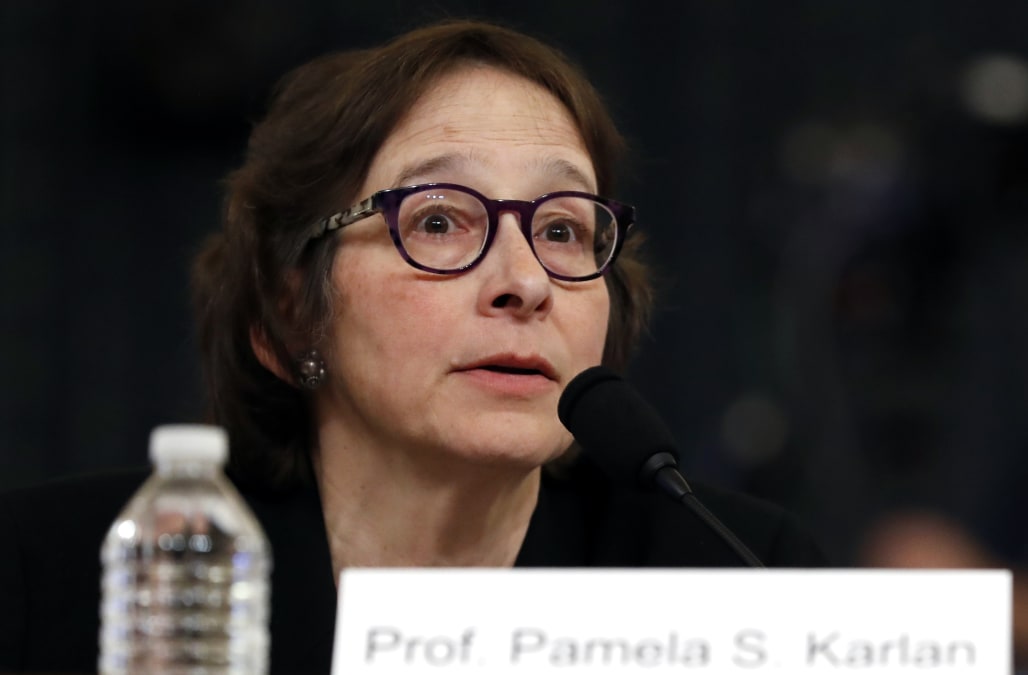 First lady Melania Trump slammed a witness in the House Judiciary Committee impeachment hearing on Wednesday, saying she should be "ashamed" about a quip involving her son, Barron.

The witness, Pamela Karlan, later said she was sorry.

"A minor child deserves privacy and should be kept out of politics," the first lady tweeted of her 13-year-old son. "Pamela Karlan, you should be ashamed of your very angry and obviously biased public pandering, and using a child to do it."

A minor child deserves privacy and should be kept out of politics. Pamela Karlan, you should be ashamed of your very angry and obviously biased public pandering, and using a child to do it.

The tweet was later added into the official record by Republicans at the impeachment hearing.

Vice President Mike Pence also weighed in, calling the joke "a new low" while speaking at an event in Michigan.

"The Democrats should be ashamed. Enough is enough," Pence said. "This sham impeachment should end."

Karlan later said at the hearing: "I want to apologize for what I said earlier about the president’s son. It was wrong of me to that. I wish the president would apologize, obviously, for the things he's done that's wrong, but I do regret having said that."

Karlan, one of four law professors to testify before the panel, had referenced the Trump's youngest son while noting that presidents aren't kings. She said the Founding Fathers included impeachment in the Constitution to ensure leaders can be held accountable.

"The Constitution doesn’t allow titles of nobility," Karlan testified. "The president can name his son Barron, but he can’t make him a baron."

The wordplay got laughs from the audience in the hearing room, but Karlan was later chastised for the line by Florida Rep. Matt Gaetz, a close ally of the president's.

"When you invoke the president's son's name here, when you try to make a little joke out of referencing Barron Trump, that does not lend credibility to your argument," Gaetz told her. "It makes you look mean. It makes you look like you're attacking someone's family, the minor child of the president of the United States."

The White House's Twitter account later tweeted out video of Gaetz's dressing down of Karlan. "Democrats are calling as witnesses the kind of people who would name the minor child of the president as a punchline in a committee hearing," the tweet said.

White House press secretary Stephanie Grisham also pounced on the Stanford Law School professor, tweeting that the joke was a "classless move." "And what's worse, it's met by laughter in the hearing room. What is being done to this country is no laughing matter," she wrote.

Donald Trump Jr. sounded off on Twitter as well. "That a 13 year old is fair game for partisan hacks on a national platform shows you all you need to know about the new left and who is now running the ship," he wrote.

"Which side is making a fever-pitched big deal out of the rhetorical play on the words 'Barron' and 'baron'? That tells you who's making the president's son an issue and who has reached a desperate new low," he tweeted.

More from NBC News:
Pelosi: First impeachment testimony 'corroborated evidence of bribery'
Jeff Sessions to announce bid to win old Senate seat back
GOP Rep. : 'If there was a quid pro quo, it certainly wasn't a very effective one'