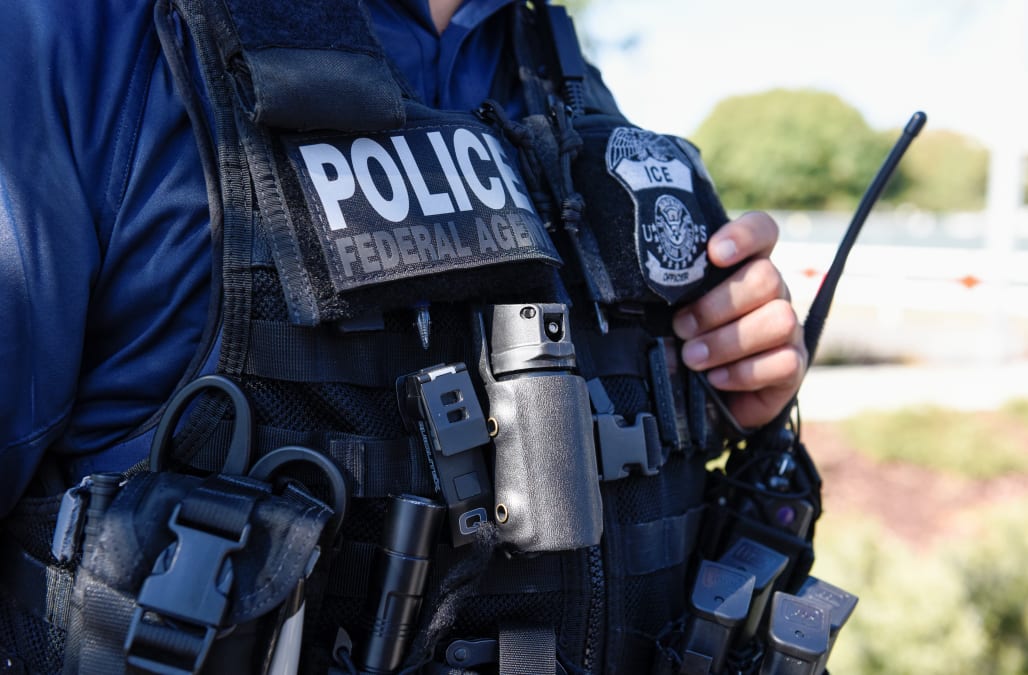 HOUSTON (AP) — U.S. Immigration and Customs Enforcement said migrants inside a Louisiana jail were pepper-sprayed to end their protest over prolonged detention.

Spokesman Bryan Cox said Wednesday that “a brief, calculated use of pepper spray was employed” during a Tuesday protest at the Winn Correctional Center in rural Winnfield. Cox said about 50 migrants were pepper-sprayed and the protesters “subsequently became compliant.” Cox said medical staff evaluated anyone who came into contact with the pepper spray and no injuries were reported.

Family members of people detained at Winn said some migrants had refused to go back to their cell and were sleeping outside. Others had written the word “Libertad” — Spanish for ‘liberty’— on bedsheets and towels.

Lawyers say asylum seekers have staged protests at other ICE jails in Louisiana, where the immigrant detainee population has surged in recent months and hit 8,000 earlier this year. Asylum seekers from Cuba and other countries say they're being detained for months without a court date or a chance to request their release even after passing an initial screening to determine whether they have a viable asylum claim.

At least 40 protesters who took part in a “Jews Against ICE” protest at an Amazon Books store along 34th Street in Manhattan were arrested by police on Sunday, August 11, coinciding with the Jewish fast day of Tisha B’Av.

This footage, livestreamed for the Jews for Racial and Economic Justice organization by author and activist Abby Stein, shows the scene at the store where more than 1,000 demonstrators spoke out against detention centers in the United States, made speeches, sang songs and held banners with slogans including “Never again means never again,” drawing a comparison between the events of the Holocaust and the current immigration situation in the US.

New York Police Department officers can be seen escorting arrested protesters into an MTA bus, which was reportedly commandeered due to the large number of arrestees.

The protest in New York coincided with a number of similar demonstrations across the country on Sunday, but Amazon’s brick-and-mortar Midtown store was chosen as a protest site due to the technology company allegedly hosting database software enabling ICE to document and detain immigrants, according to reports from PIX11 and Haaretz. Credit: Abby Stein via Storyful

Protesters gathered outside the regional immigration court near Bloomington, Minnesota, on July 30, to demonstrate against US Immigration and Customs Enforcement (ICE).

During the protest, organized by the self-described Jewish anti-ICE group Never Again Action, demonstrators stood in front of vehicles to prevent them from entering or exiting the Bishop Henry Whipple Federal Building.

This footage, filmed by members of the action group, shows protesters chanting “Abolish ICE” and standing in front of cars.

“Shutting down an ICE building isn’t ‘Minnesota nice’. Blocking a road isn’t polite. Standing in front of a car isn’t safe. There are lives at stake, so we’re going to do it anyway. Because it works. Because it can’t be ignored,” a tweet from the group said. Credit: Never Again Action via Storyful

Credit: Never Again ActionAt least 1,000 Jews, immigrants, and activists protested outside Immigration and Customs Enforcement’s Washington, D.C., headquarters on Tuesday afternoon, shutting down all points of entry for several hours. “Never again means close the camps,” the protesters chanted in sweltering, 95-degree heat, as they stood together with linked arms outside the doors of the building. They hung an enormous banner over the entry ramp to ICE headquarters that read, “Pelosi, Never Again Is Now.” The demonstrators, several of whom were arrested Tuesday afternoon, were part of an event organized by Never Again Action, a Jewish activist group that’s been protesting outside ICE facilities around America, and Movimiento Cosecha, an organization fighting for undocumented immigrants. Their goal was to disrupt ICE’s daily work, and they surrounded the headquarters at 1 p.m., hoping to grab people getting back from lunch. The Jewish Group Taking on ICE — and the ‘Concentration Camp’ TabooFederal workers were forced to walk around the protesters, looking for ways to enter the building, as people outside caught glimpses of workers inside checking the doors. “We will not allow them to get to their destructive place of work,” one protester said. Demonstrators sang in Hebrew, English, and Spanish, wearing yellow shirts that said “Never Again Para Nadie,” the latter meaning “for anyone.” Some chanted “the whole world is watching” and “quit your jobs.” According to Movimiento Cosecha, ICE attempted to move busloads of its employees to a different facility during the protest because employees were unable to work. Police arrested some of the protesters, although it remains unclear how many. Never Again Action posted a video of arrestees in handcuffs on its Facebook page. “So we’re inside right now, we’re in the process of having our handcuffs changed to zip ties,” someone can be heard saying as the camera pans around the room. “And we are standing in solidarity with everyone outside. We know this is a choice for us, it’s not a choice for everyone.” The arrestees couldn’t immediately be taken to the police station, according to reports from organizers, as protesters were blocking every exit. At one point, police on motorcycles moved toward the line of protesters with their sirens on and engines revving, but no one budged. ICE was blockaded for five hours, and video footage showed that the agency sent its employees home early.Sophie Ellman-Golan, a 27-year-old organizer of Tuesday’s march, told The Daily Beast the night before the D.C. protest that she hadn’t given out the location of the march ahead of time because NAA doesn’t have a protest permit. “We don’t want to make it easy for the law to find us,” she said. NAA is a decentralized group, with 100 people filling various volunteer roles from press release writer to legal observer to medic. All that’s needed to set up an NAA group  is access to the online handbook and a couple of Jews.“In New Jersey when we marched there were cheers from cars we walked past,” said Ellman-Golan. “But oftentimes these facilities are intentionally isolated from everyone.” Ellman-Golan led an assembly the night before the protest, where she gave people instructions for the next day, warning them what to do should the police inevitably show up. She said she was ready for the media attention, for the possible arrests, and for Jews to step up and take action. While there’s already been a lot of talk about the acceptability of comparing the Holocaust to ICE detention camps, Never Again Action isn’t concerned about that. “Our goal was to sound the alarm to non-immigrant mainstream America,” says community organizer Alyssa Rubin, 25, who helped organize Tuesday’s march. Rubin estimates that over 125 people have been arrested thus far in the few weeks since the group’s protests began. The New York Lawyer’s Guild has offered aid to the 100 plus people who have already been arrested, as well as lawyers volunteering in local chapters. “As an undocumented immigrant myself, I believe in Movimiento Cosecha’s mission,” Catalina Santiago, 22, told The Daily Beast. “As a DACA recipient I know I’m not deserving of protection from deportation, along with all the 11 million undocumented immigrants.” Washington is not Santiago’s first NAA protest. She remembers cops coming to arrest people at the Boston protest, where she and thousands of others walked from the Holocaust Museum to Boston’s South Base detention center. But Santiago wasn’t worried. “It’s important not to allow the state to impose fear,” she said.Michaela Caplan, a 23-year-old recent Dartmouth University graduate, who was arrested in New Jersey and helped coordinate the Boston action, went to the border over winter break. “I was surprised by how bad but also how normalized it was,” Caplan, who’s been arrested in protests twice before, told The Daily Beast. “I’m grateful for the sacrifice I and everyone else made by protesting and risking arrest, but we aren’t risking deportation.” Read more at The Daily Beast.Got a tip? Send it to The Daily Beast hereGet our top stories in your inbox every day. Sign up now!Daily Beast Membership: Beast Inside goes deeper on the stories that matter to you. Learn more.

Protesters rallied in front of the US Immigration and Customs Enforcement (ICE) Field Office in Atlanta, Georgia, on July 15 to protest against the agency and their role in migrant detentions and deportations.

One man handcuffed himself to the entrance gate of the property. Other demonstrators yelled “Gestapo” at police officers, held signs, and chanted “Never again means now.”

The protest was organized by Never Again Action, an activist organization calling for Jewish people to protest against ICE and the separation of immigrant families, according to their website. Credit: Margot Paez via Storyful

BOCA RATON, FLORIDA - AUGUST 12: Activists and protesters including the group Never Again Action are seen as they protest outside the headquarters of the private prison company Geo Group on August 12, 2019 in Boca Raton, Florida. The demonstrators were protesting the day after the Jewish holiday of Tisha B’Av against what they say are the poor conditions inside facilities run by the Geo Group, which runs federal and state prisons, as well as immigration detention centers. (Photo by Joe Raedle/Getty Images)
Protestors participating in a "Never Again is Now" action are arrested by Philadelphia Police after blocking the city's Independence Day parade route, July 4, 2019. (Photo by Michael Candelori/NurPhoto via Getty Images)
Up Next

One 43-year-old man from Cuba, Roylan Hernandez Diaz, died by apparent suicide in October at another Louisiana jail, the Richwood Correctional Center. Hernandez had applied for asylum at a border bridge in El Paso, Texas, was deemed “inadmissible” by border agents and was placed in detention for five months.

“The psychological impact of situations like this is horrendous,” said Nathalia Dickson, an immigration attorney based in Baton Rouge, Louisiana.

A federal judge in September sided with the Southern Poverty Law Center, which sued on behalf of asylum seekers detained in Louisiana, Alabama and Mississippi, and ordered ICE to follow its own guidelines in releasing detainees.

Both Winn and Richwood are operated by the same Louisiana-based company, LaSalle Corrections, which operates several jails and prisons converted into immigration detention centers since last year.

Cox, the ICE spokesman, said the agency used pepper spray “when the ICE detainees refused to comply despite repeated attempts by facility staff and ICE officers to disperse the group and restore orderly operation of the facility.”

“This was a calculated use of force, consistent with agency protocol,” Cox said.