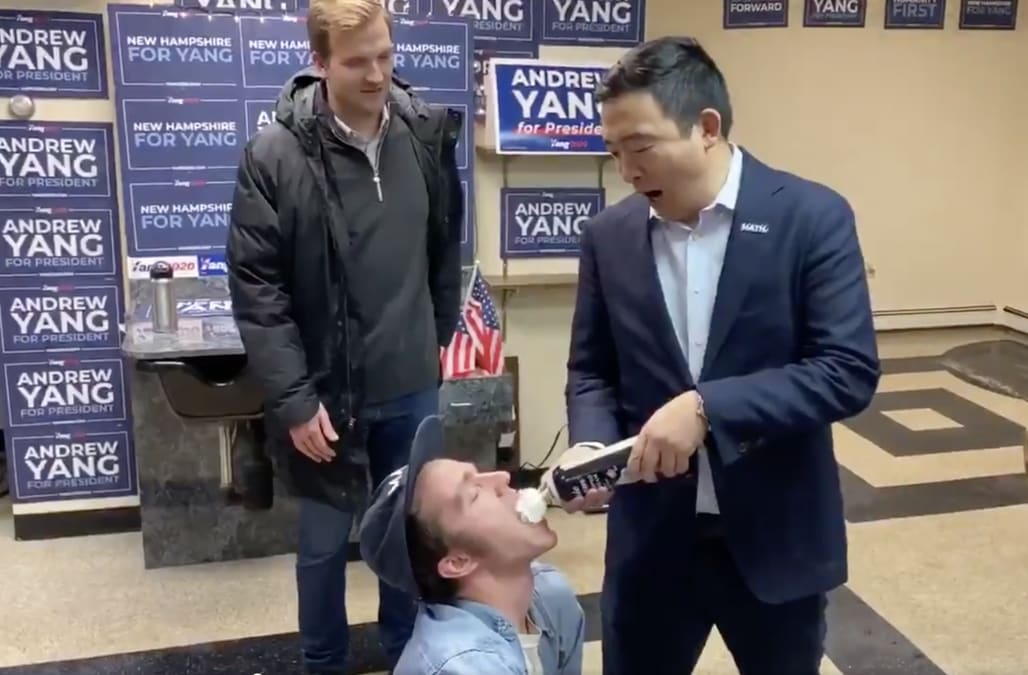 Democratic presidential candidate Andrew Yang celebrated the opening of his new office in Manchester, N.H., in a unique way that people on social media are calling "uncomfortable."

After Yang opened the office in New Hampshire, which will hold its primary on Feb. 11, ABC News reporter Christopher Donato posted a video on Twitter that shows the candidate celebrating by shaking up a can of whipped cream and spraying it into a kneeling supporter's mouth.

"That's a full-service presidential candidate!" he said after spraying the whipped cream. "The office opening is complete!"

Yang's campaign manager is seen behind him, seemingly desperate to get the candidate out of the situation before a second supporter kneels for his turn to get whipped cream in sprayed into his mouth. His staff wasn't quick enough because he sprays the whipped cream again. The campaign manager stepped in quickly after and pulled Yang away.

The former tech executive is known for having fun with supporters on the campaign trail. The Democrat has crowd surfed, skateboarded and danced throughout the campaign.

His supporters, often dubbed the "Yang Gang," seemingly enjoy the antics, but not everyone was fond of the whipped cream moment. One person on Twitter compared it to a frat. Others called it "uncomfortable" and "super weird."

Uh... this is super weird. https://t.co/jaLEKQnVmh

Yang has built his campaign around his basic income proposal called "Freedom Dividend," which promises to give every American $1,000 a month.

"We’re growing and growing. We’re in a peak at the right time," Yang said at the office's opening, according to Rolling Stone. "When other campaigns are scaling back and shrinking, we are hiring and expanding."