Giants QB Daniel Jones struggles in loss to Patriots, but he should be just fine 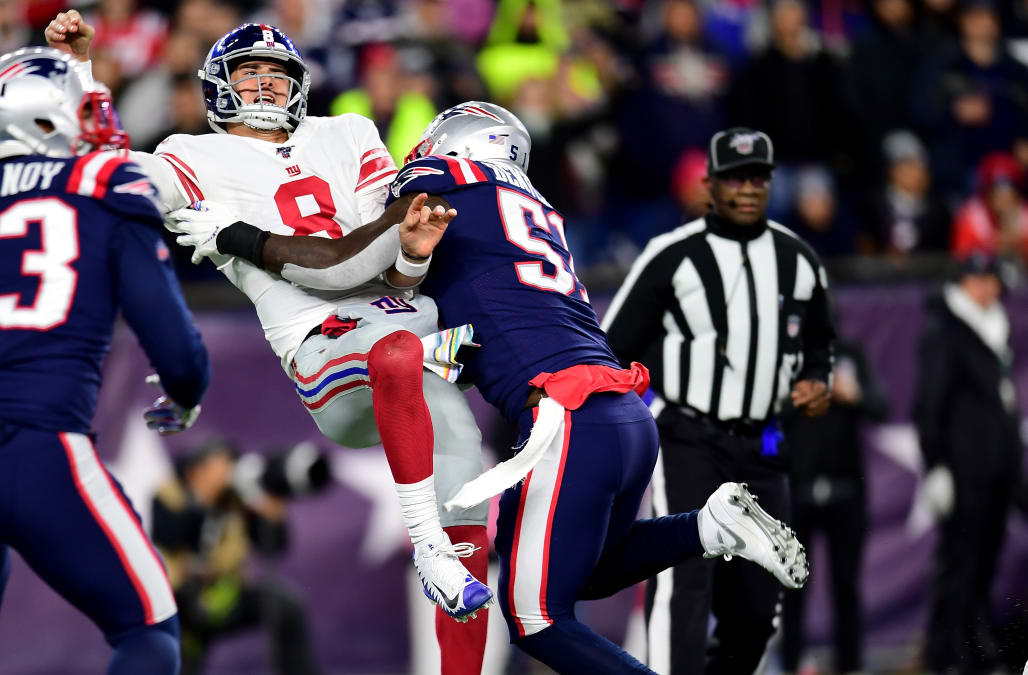 In Tom Brady’s fifth career start, he threw four interceptions against the Denver Broncos, had only 202 yards passing and the Patriots lost 31-20. And that was with a team that would go on to win a Super Bowl.

New York Giants quarterback Daniel Jones’ rookie season wasn’t going to be perfect. He certainly wasn’t perfect on Thursday night. The Patriots seemed to confuse him, causing him to hold the ball too long at times and make some bad reads that were intercepted. Despite multiple key injuries on offense, New York kept the game close into the fourth quarter and might have had a chance at a massive upset had the offense played better. Instead, the Patriots and their No. 1 ranked defense did enough for a 35-14 win that wasn’t as dominant as the score would indicate. Either way, they improved to 6-0. The Giants are 2-4.

Young quarterbacks, even ones who turn out to be as great as Brady, are going to have rough games. As Bill Belichick has done to many other rookie quarterbacks, he and the Patriots gave Jones a lesson he can take with him in his development.

Daniel Jones has one dime

Even in a loss, on a night he didn’t play well, Jones had the type of throw that shows why Giants fans should be excited about his future.

In the second quarter, Jones lofted one up to Golden Tate. Tate was covered very well by Jonathan Jones, but Daniel Jones’ pass was even better than the coverage. He put it where it had to be, and even though the coverage was so good that the ball was slightly tipped, Tate eventually hauled it in and ran for a 64-yard touchdown.

Jones wasn’t great on Thursday night. Far from it. The throw to Tate was one of his few highlights. But he was a rookie on a short week in a road game against the NFL’s No. 1 ranked defense. He was playing without top two running backs Saquon Barkley and Wayne Gallman, top receiver Sterling Shepard and tight end Evan Engram. It’s hard to be too critical of his mistakes. Late in the game Jones threw a perfect pass to tightly-covered rookie Darius Slayton down the sideline, right over Pro Bowl cornerback Stephon Gilmore. But the veteran was able to reach up and knock the ball away before the rookie could secure the catch. There’s not much Jones can do about that. Jones finished 15-of-31 for 161 yards, one touchdown and three interceptions.

Giants general manager Dave Gettleman was criticized relentlessly for taking Jones with the sixth overall pick in April. Jones looked very good in the preseason, led a great comeback win in his first start against the Tampa Bay Buccaneers and has had good moments and bad since then. Most rookie quarterbacks are inconsistent, especially ones on bad teams. Even though Jones’ stat line was awful on Thursday he had some good excuses, and the Giants shouldn’t be any less excited about what’s to come in the future.

Giants stayed in the game vs. New England

The Giants hung in the game a lot longer than expected, but not because of Jones and the offense. The defense played well. Markus Golden scored on a long fumble return for a score after a Lorenzo Carter strip sack. New England’s offense didn’t hit many big plays and struggled to finish drives in the second half until the Giants defense was gassed from being on the field too long. With less than nine minutes to go the Giants had the ball trailing 21-14. A fumble by third-string running back Jon Hilliman was scooped up by Kyle Van Noy and returned for a touchdown. That put the game away.

The Patriots offense didn’t play well. Tom Brady missed some throws that he generally didn’t miss in his 30s. At 42, he’s going to miss a few. A blocked punt touchdown in the first half and a fumble return touchdown in the second half made the night easier than it should have been for the Patriots. The Giants weren’t expected to win but can’t be upset with the effort.

On a different night in the future, with a better or at least more healthy team around him, Jones might play well enough to close that gap. He’s learning. The Patriots were just too tough for him, at this point.