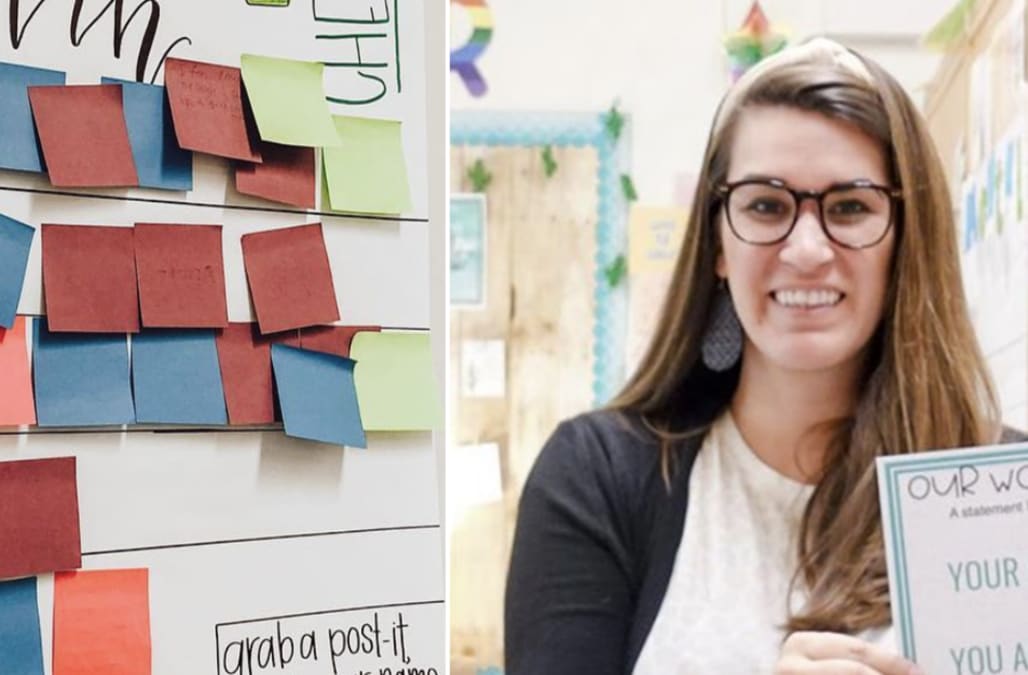 A teacher in California revealed her way of helping students share their feelings, and now classrooms around the world are following suit.

The chart, which features a range of feelings from "I'm great" to "I'm in a really dark place," asked students to write their name on the back of a Post-it and stick it to the row that best described their feelings.

Castillo's original post, which resurfaced on World Mental Health Day this Thursday, has received more than 7,500 likes. The concept itself has spread far beyond that though, with Castillo saying she's heard from teachers in far-away places like New Zealand and Africa who have designed their own version.

"I never expected it to get beyond my following," Castillo told "Good Morning America" in April. "To see this being used in multiple countries around the world... to hear actual stories of people helping their students — I'm really overwhelmed with joy."

Castillo said she designed the chart — which she based a digital version used by another teacher — to help children seek help when they need it. The "I'm struggling" row of the poster is meant for students who are feeling bad but are trying to work through it themselves. Meanwhile, the rows below that are for students who require emotional support.

"I've had a lot of students in the last five years of my career that have struggled with self-confidence, self-doubt, image, had suicidal thoughts, attempted suicide and, after seeing all that, I've been making it a theme in my classroom and trying to check in with them," Castillo told "Good Morning America."

The teacher reemphasized her commitment to those ideas on Thursday, sharing her own World Mental Health Day post. In it, she implored her followers to pay attention to young people when they try to express their emotions.

"Remind students that their feelings are valid. And they are ENTITLED TO THEM. Who are we to tell them what to feel and when," her post read.

It's difficult to measure how many teachers have crafted their own versions of Castillo's chart, but several did share their creations to Instagram in the months following her original post.

"If it can help one student, then it'd be better than where we're at now," Castillo told "Good Morning America." "I hope it gets to a place where we can talk about our struggles openly and our mental health. This looks like a step in the right direction."