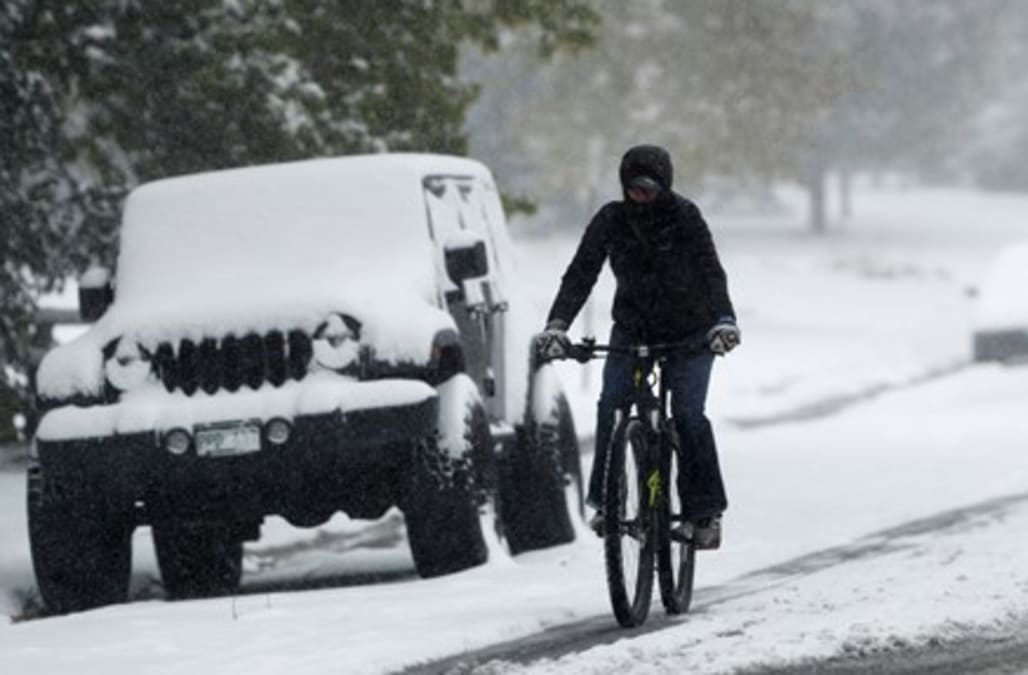 A "potentially historic" storm will batter the north-central United States over the next few days with some parts seeing "moderate to heavy snow" and record low temperatures, according to various weather agencies.

As of Thursday morning, the storm had already dumped some snow on certain parts of Montana, Wyoming and Colorado. Forecasters said there was already a report of 24 inches of snow in Pony, Montana.

The Park County Sheriff's Office in Livingston, Montana, posted photos on their Facebook page of a snow-covered interstate and asked motorists to drive safely. The National Weather Service said "moderate to heavy snow" is expected for the southeast part of the state into parts of the Central and Northern Plains. The snow will be accompanied by gusty winds which could make traveling difficult.

The agency called the tempest a "significant, and potentially historic, October winter storm."

A significant, and potentially historic, October winter storm is on track to impact the northern Rockies, and areas of the central and northern Plains through Saturday. Significant travel disruptions, power outages, and impacts to agriculture and livestock are all anticipated. pic.twitter.com/5KGdPOfWJQ

Weather forecasters said the storm is expected to linger over the Northern Plains into the weekend, with six to 12 inches of snow predicted for the region and isolated totals up to 18 inches from Bismarck, North Dakota to Fargo. Weather.com warned that "dangerous blizzard conditions" are expected in the region through to late this week.

Denver, which forecasters said went from 80 degrees on Wednesday down to 22 degrees Thursday morning, will see its first snowfall of the season. The state is currently under a winter weather advisory.

Storm warnings and watches have been issued for North and South Dakota, Wyoming, northwestern Minnesota and northwestern Nebraska, according to the National Weather Service. "Record low temperatures" are possible across western and central parts of the country until Friday, the agency said.

The tri-state area may not see any snowfall over the next few days, but that doesn't mean New York and New Jersey are spared from nasty weather.

Showers and periods of torrential, frigid rain began battering the region Wednesday and is expected to last through Friday, according to NBC New York. Strong winds are expected Thursday and Friday with some parts, like eastern Long Island, seeing gusts up to 50 mph.

A wind advisory has been issued for Suffolk County for Thursday into Friday morning, the outlet reported. Parts of the Jersey Shore and Long Island are under coastal flood advisories through Friday.

Across the country in California, winds gusts reached up to 80 mph as of Thursday morning is some isolated areas. The winds are expected to be "dangerously high" into Friday, according to weather forecasters. Due to the strong winds and other conditions, such as dry vegetation and low humidity, much of California and Southern Nevada are in a Critical Fire Danger category.

More from NBC News:
Trey Gowdy left Congress a GOP bulldog. He joins Trump's legal team a lapdog.
Lindsey Graham duped by Russian pranksters
Are you swiping away money? These simple tips can help you get control of your spending