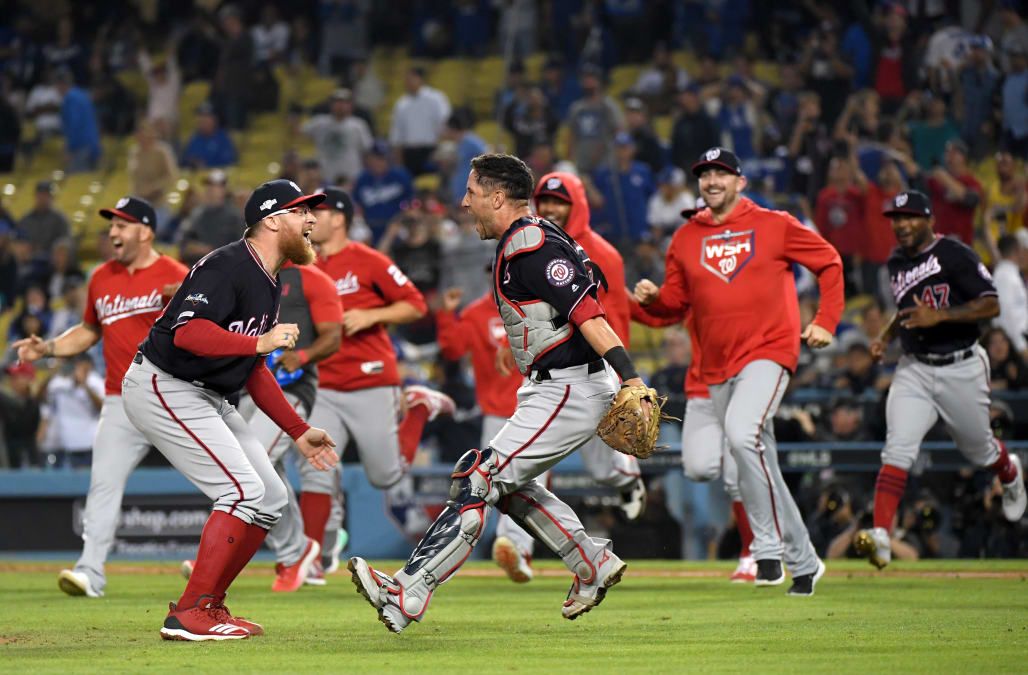 What the St. Louis Cardinals and Atlanta Braves Game 5 lacked in drama, the Los Angeles Dodgers and Washington Nationals more than made up for.

After 10 hard-fought innings, the Nationals completed their comeback and stunned the Dodgers with a 7-3 victory to advance to the National League Championship Series for the first time since the franchise moved to Washington.

The role of hero belonged to a familiar face at Dodger Stadium. Howie Kendrick, who spent the 2015 and 2016 seasons in a Dodgers uniform, drilled a go-ahead grand slam against Joe Kelly in the 10th inning to secure the win for Washington.

The drama really picked up in the eighth inning. That’s when Anthony Rendon and Juan Soto hit back-to-back home runs against Clayton Kershaw to tie the game for Washington. Kershaw entered as a reliever in the seventh inning and thwarted two-out rally by striking out Adam Eaton. He wasn’t nearly as effective in his second inning, which will undoubtedly continue fueling the narrative of Kershaw coming up short in October.

Prior to Kershaw’s blow up, Walker Buehler continued his ascent with another brilliant outing. The young ace held Washington’s offense to one run over 6 2/3 innings. Washington’s Stephen Strasburg was roughed up early, allowing two home runs and three runs overall over the first two innings, but bounced back to limit Los Angeles to just those three runs over six innings.

WHO MADE THE DIFFERENCE

• Howie Kendrick: What a moment for the former Dodger. Kendrick entered his game-changing at-bat hitless, but managed to square up Joe Kelly for one of the biggest hits and home runs in Nationals franchise history. The grand slam was also the first of its kind in a postseason game.

• Anthony Rendon/Juan Soto: It’s only fitting that the two men who carried Washington’s offense all season long were instrumental in tying the do-or-die Game 5 and completing this stunning upset. In addition to his home run, Rendon added two doubles. The second of which got Washington’s 10th-inning rally rolling. Soto was also on base three times, including an intentional walk in the final frame to set up Kendrick’s heroics.

• Walker Buehler: We witnessed something special from Buehler in this series. As he good as he was during his breakout season in 2018 and as good as he was during the 2019 regular season, he was on another level in October. In Game 1, he pitched six scoreless innings while striking out eight. He was every bit as good in Game 5, throwing a career-high 117 pitches to L.A. in a great position to win. Despite the heartbreaking loss, he can hold his head high.

The home runs by Rendon and Soto were definitely must-see moments for Nationals. But Kendrick’s series-clinching grand slam could be the defining moment for a franchise that’s always seemed to fall one step short.

Howie Kendrick does not want an 11th inning!pic.twitter.com/KeZg9SLVwX

WHAT THEY'LL BE TALKING ABOUT

The 106-win Dodgers fell short again. There are so many directions where fingers can be pointed after Game 5. Whether it be an offense that produced only two hits after the second inning. Or Clayton Kershaw's latest postseason disappointment. Or Dave Roberts' decision to roll with Joe Kelly over closer Kenley Jansen for two innings in a tie game.

The Nationals deserve credit, too. With their backs against the wall, they rallied in Game 4 and 5 to win the first playoff series in franchise history. But in so many ways, this felt like the Dodgers letting another golden opportunity slip through their fingers.

A couple of NLDS underdogs will do battle with a spot in the World Series on the line. The Nationals will head to St. Louis to battle the Cardinals in Game 1 of the NLCS on Friday beginning at 8:08 p.m. ET. It will be the second-ever postseason meeting between these franchises. The Cardinals got the upper hand in the 2013 NLDS, winning three games to two. The Cardinals also won five of their seven regular-season meetings with Washington.