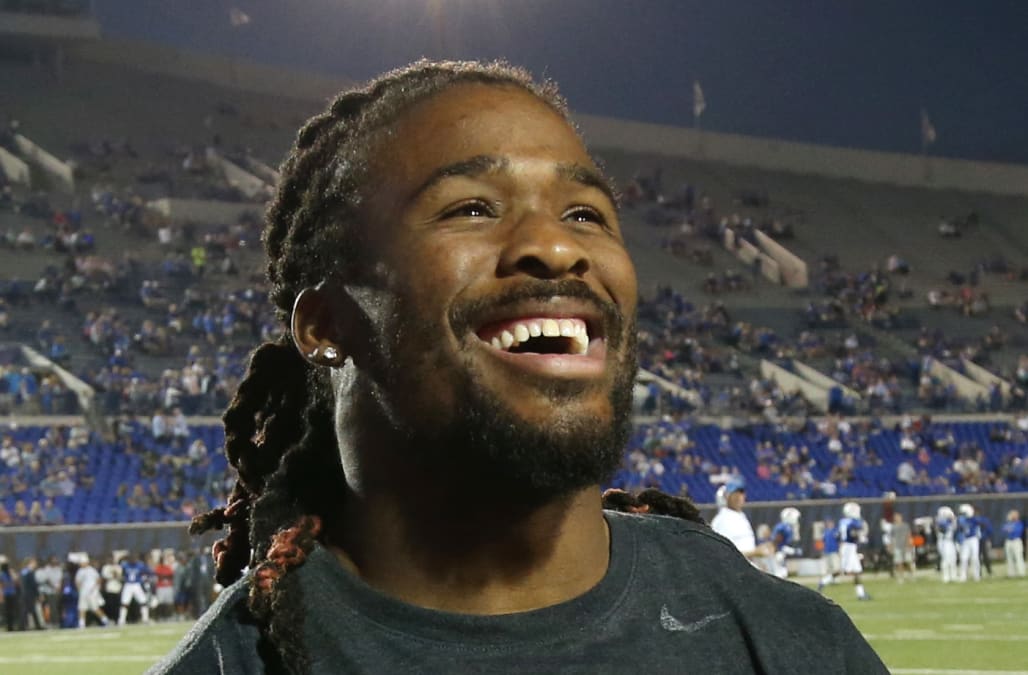 Former NFL star DeAngelo Williams has been lending a hand in the fight against breast cancer for years, and now his donations have reached a major milestone.

Williams, who played for the Carolina Panthers and Pittsburgh Steelers during his 11-year career, launched the DeAngelo Williams Foundation in 2006. The organization, which raises money to help with breast cancer prevention, research and care, has a deeply personal mission for the football star, who lost his mother and four of his aunts to the disease.

In October of 2015, Williams announced that his foundation would begin covering the cost of mammograms so that women would have the chance to check for early signs of cancer. The foundation announced yesterday that it had now funded more than 500 screenings for women across the country.

The announcement comes four years after the campaign launched, and just five years after Williams lost his mother.

"To be able to help all these women is amazing. This can be life-changing for these women," Williams told Today in a recent statement. "We are enabling them to get this care that no one should ever be denied or not have access to."

Products that give back for breast cancer research

Gorjana will be donating 50 percent of proceeds from the Power Gemstone Bracelet to the Breast Cancer Research Foundation.

In addition to donating $50,000 to BCRF, Rothy's is spreading the love this October by gifting a select limited edition pink shoes to survivors and supporters with the purchase of eligible shoes.

"At Rothy's, we're just as dedicated to sustainability as we are to supporting women. We're thrilled to be an official partner with the Breast Cancer Research Foundation, which works tirelessly to support lifesaving research. Last year we asked our customers to tell us about women in their life who have been impacted by breast cancer, and we were incredibly moved by the responses we received. We're looking forward to reading more of those special words this year." - Rothy's VP of Marketing, Elie Donahue

As a direct contribution in support of this Print with Purpose collection, the BCRF will receive a $22,000 donation from Lilly Pulitzer.

Jack Rogers will be donating 10% of proceeds from the Georgica sandal in blush and magenta to the Breast Cancer Association throughout October.

100 percent of the proceeds will go to the Breast Cancer Research Foundation.

50 percent of the proceeds from every purchase of the Metastatic Breast Cancer Charm Necklace Set will support our Legacy Retreat through Inheritance of Hope for families with a parent battling metastatic breast cancer.

20 percent of all net proceeds will be donated to Bright Pink.

Bobbi Brown Cosmetics will donate $24.00 from the purchase of each Proud to Be Pink Lip Color Duo to the Breast Cancer Research Foundation® (BCRF) from 9/9/19 to 6/30/20.

In support of The Estee Lauder Companies' Breast Cancer Campaign, Origins will donate 100 percent of the purchase price of this Limited Edition Blooming Bold Lipstick Set.

15 percent of proceeds will be donated to the American Cancer Society.

10 percent of profits from sales of this set support the Young Survival Coalition (YSC), who envisions “A world where no young adult faces breast cancer alone."

Donna Karan Cosmetics will donate 20 percent of the SRP from the sale of this product to the Breast Cancer Research Foundation.

David Yurman is partnering with BCRF this October, launching an exclusive bracelet with 20% of proceeds going towards the non-profit.

With each purchase of this product, Estée Lauder will donate 20 percent of the suggested retail price to the Breast Cancer Research Foundation.

10 percent of net sales will be donated to Boarding for Breast Cancer, a nonprofit that advocates for early detection and empowers young people to live a healthier lifestyle.

20 percent of the proceeds from the sale of this bracelet will be donated to the Breast Cancer Research Group (GEICAM) to support its efforts in studying breast cancer.

La Mer will donate 30 percent from the purchase price of this limited edition, travel-size Cleansing Micellar Water with a maximum donation of $53,000 to the Breast Cancer Research Foundation.

100% of US sales benefit Bright Pink®, a non-profit dedicated to prevention and early detection of breast and ovarian cancers in young women.

From September 9th – October 31st 20% of the proceeds directly benefit the Dr. Susan Love Foundation and their research.

In honor of Breast Cancer Awareness Month, Brahmin brought back a favorite pink collection with a portion of proceeds benefitting the National Breast Cancer Foundation during the month of October.

$10 from every sale from the ink on pink collection goes to Living Beyond Breast Cancer.

Activewear brand 686 is on a mission to board for breast cancer (literally!) with their Moonlight Jacket and will donate $18 from every jacket sold to BOARDING FOR BREAST CANCER (B4BC) a nonprofit foundation providing breast cancer education, prevention, and survivor support programs for young people.

On October 5th & October 6th, Native will donate $1 per bar of deodorant sold to Fuck Cancer’s Personal Ink (P.ink) a program, dedicated to empowering women to reclaim their bodies after mastectomies.

10 percent of each purchase goes to lifesaving research at the Breast Cancer Research Foundation!

During the month of October, customers can select any large round or large square pink suede box and pair with any pink flower and the brand will donate 20% of proceeds from to City of Hope, a world leader in the research and treatment of cancer.

"We are donating 100 percent of US proceeds from this Regenerist Whip Pink Ribbon Face Moisturizer + Refill to benefit Bright Pink and their life-saving mission focused on the prevention and early detection of breast and ovarian cancer."

20 percent of net proceeds from this purchase will help fight Breast Cancer.

30 percent of all Riley Versa site-wide purchases (excluding the Sweat Pouch) will be donated to The Pink Agenda throughout the month of October.

The year Williams's mother died, he died his hair pink, painted his toenails pink and wore pink accessories as part of his uniform. His brightly highlighted appearance — which he said was later banned by the NFL — was meant to bring awareness to people like his mom and aunts, who'd been forced to battle the disease.

"This is dedicated to my mom, my aunts & women everywhere affected by Breast Cancer. I love you," Williams captioned a 2015 video promoting Breast Cancer Awareness Month.

Now the running back's efforts have paid off. In addition to free mammograms, the foundation also recently hosted a "53 Strong DeAthlon," a fundraising event named for the age Williams's mother was when she died.

And Williams isn't the only professional athlete fighting breast cancer in recent months. In September, NBA Hall of Famer Reggie Miller participated in a charity bike ride for the cause, and earlier this week several members of the Los Angeles Chargers hosted a charity yoga session for breast cancer survivors.