ALDS Game 5: Astros headed to the ALCS after another Gerrit Cole gem 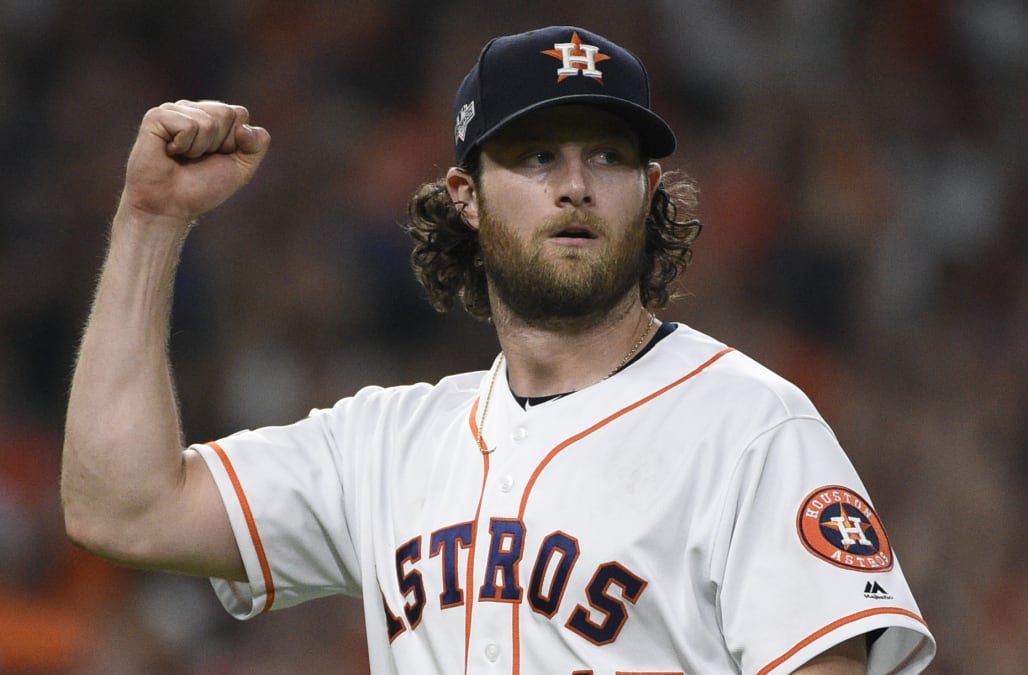 The Astros sent a message Thursday night: The road to the World Series goes through Houston and, for that matter, their ace pitcher Gerrit Cole.

Cole was magnificent again, pitching the Astros to victory in Game 5 of the American League Division Series against the Tampa Bay Rays and setting up a heavyweight matchup with the New York Yankees with a World Series berth on the line. The Astros won 6-1, jumping on Tampa Bay for four first-inning runs then never looking back at Cole’s ever-steady presence on the mound made the Rays looked overmatched for the second time in the series. He struck out 10 batters, an MLB record 11 straight games for Cole with double-digit strikeouts.

Now we get the ALCS that baseball fans everywhere had been looking forward to: The 107-win Astros against the 103-win Yankees, a clash for the AL pennant that might be a more titanic battle than what will follow in the World Series. It’s two teams with potent lineups that can score plenty of runs and dynamic pitchers, although Houston’s start games and the Yankees’ finish them.

It wasn’t the historically dominant performance of Game 2 for Cole — who whiffed 15 Rays batters that night — but it was still really, really good. You can’t spot a pitcher like Cole run fours in an elimination game and expect to move to the next round.

The Rays, meanwhile, only mustered two hits off Cole through seven innings. One of them was a second-inning homer from Eric Sogard that seemed to immediately answer the Astros rally, but nothing else came from it. Cole struck out 10 on 107 pitches, walked just two and managed to avoid any kind of drama. Even at pitch No. 100 — which notched his ninth strikeout — Cole was pumping 99 mph.

It was everything the Astros could have asked for in a Game 5.

WHO MADE THE DIFFERENCE

• Alex Bregman: He’s the motor that keeps Houston’s lineup moving and he had the biggest hit in this one. He’s no stranger to getting big hits and performing in the postseason. He can add the two-run double to the list of achievements in his already decorated career at 25 years old.

• Gerrit Cole: It’s pretty clear he was the main difference-maker in this game, but also the series. He combined to strike out 25 Rays batters in his two starts and allow just one run. As close as this series was, there’s no doubt that Cole would be the MVP of this series were that an award that was given in the first round.

• The Rays bullpen: Give credit to the Rays bullpen. They kept this game from getting ugly. Seven Rays relievers held the Astros to just one hit between the first inning and eighth, when the Astros hit back-to-back homers. If the Rays’ offense had been able to get anything going against Cole, their bullpen could have been heroes.

The Astros couldn’t do it without the bats too. Here are the back-to-back daggers from Brantley and Altuve in the eighth.

WHAT THEY'LL BE TALKING ABOUT

The question is whether the Astros benefited from Glasnow tipping his pitches. Camera caught Bregman telling his teammates something about what Glasnow was doing on the mound. A few different ex-MLB players were tweeting in the first inning about how Glasnow has a reputation for tipping pitches. The Astros are smart, we know that, so they could have certainly jumped on the clues they were given.

Since the Rays bullpen did well after Glasnow was pulled, it’s worth wondering whether the supposed pitch tipping cost the Rays a chance to play in the ALCS.

The Astros and Yankees meet Saturday for Game 1 in Houston. The Yankees enter the series fully rested and would have their pick of Luis Severino and James Paxton to start, but manager Aaron Boone said Wednesday he hadn’t decided yet. The Astros would presumably start Zack Greinke in Game 1, since he’d be next in their rotation. Greinke got beat up by the Rays in Game 3 of the ALDS, but the Astros need him to set the tone in the ALCS after having to use Cole and Justin Verlander twice. First pitch is at 8:08 p.m. ET with TV coverage on Fox.