Donald Trump's business ties to Turkey in the spotlight 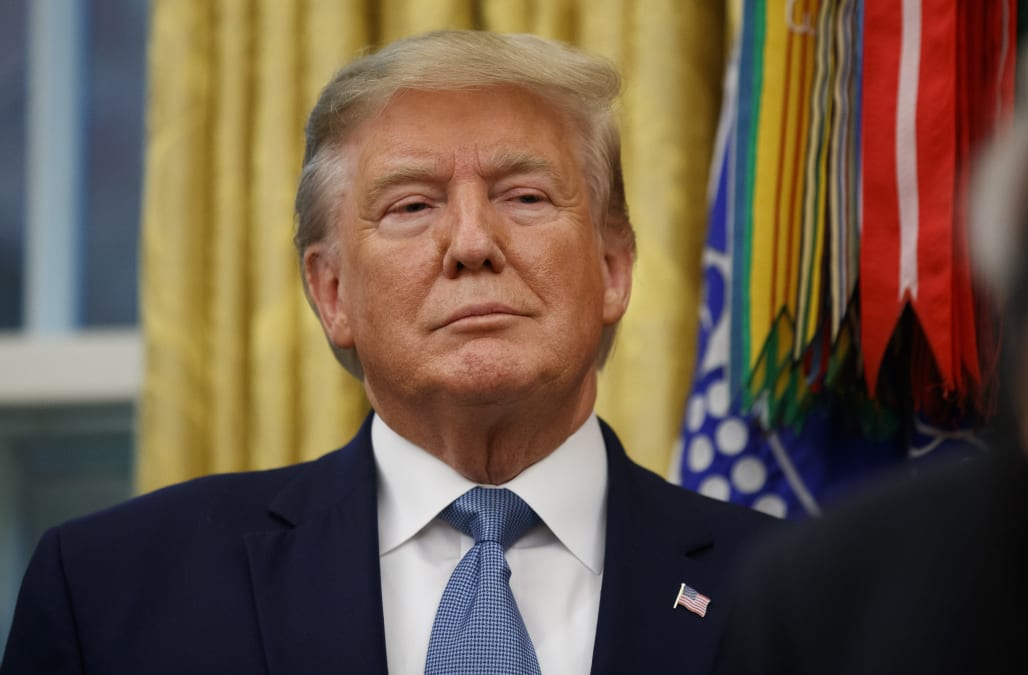 WASHINGTON — President Donald Trump’s sudden decision to pull U.S. troops out of Northern Syria late Sunday night has drawn harsh rebukes from both Republicans and Democrats in Congress, raised alarm bells among America’s allies across the globe and sent the Pentagon and the State Department scrambling to contain the fallout.

While the president has defended the decision as part of his longtime promise to end U.S. military involvement in the region, even his staunchest supporters at home warned that it has essentially given Turkey a green light for a major military offensive against the Kurdish minority there, a key U.S. ally in the fight against the Islamic State militant group and a longtime target of Turkish President Recep Tayyip Erdogan.

The president has denied that the U.S. is abandoning the Kurds, tweeting on Tuesday that, "we may be in the process of leaving Syria, but in no way have we abandoned the Kurds, who are special people and wonderful fighters.”

The Sunday call, which NBC News reported was set up to ease Erdogan’s anger for not getting a one-on-one meeting with Trump at last month’s United Nations General Assembly gathering, was the latest chapter in a relationship that goes back to before the president’s election and marked yet another milestone Tuesday when Trump announced that he is inviting Erdogan to the White House in November.

Trump has appeared to side with Erdogan at times throughout his presidency. For example, when Republican senators sought to punish Turkey this summer for its purchase of a Russian missile defense system by pushing the president to impose congressionally mandated sanctions, Trump invited them to a White House meeting to ask for "flexibility" in dealing with the issue. Those sanctions have not been implemented.

And the fact that Trump made his decision to pull the U.S. troops out of Syria shortly after the phone call with Erdogan has raised alarm bells from policymakers, as well as government ethics watchdog groups who have long seen Trump’s extensive business interests as a potential area for conflicts of interest.

“It’s absolutely staggering” that Trump made a decision that “has put us on the brink of causing genocide in Syria,” said Wendy Sherman, an undersecretary at the State Department during the Obama administration. The decision underscores the “impulsiveness” and “the transactional, quid pro quo-ness of the president,” she said.

That “transactional” charge is based on the Trump family’s multitude of continuing business entities and interests, all separated from the president — at least on paper — by the trust that now controls them. But the president is the beneficiary of that trust and two of his children have roles in it. Trump and his family have long had business ties in and with Turkey, the most visible example being the Trump Towers Istanbul, which licenses the Trump name. The Trump Organization describes the buildings on its website as “a landmark in the historic city of Istanbul” and it is the organization’s first and only office and residential tower in Europe, with offices, apartments and upscale shops. The Washington Post has reported that the organization was paid up to $10 million to put the Trump name on the two buildings.

Erdogan attended the opening ceremony of the office and residential towers in 2012 and Ivanka Trump tweeted a message thanking him for attending, although a photo of Erdogan at the ribbon cutting has been removed from his Facebook page.

Thank you Prime Minister Erdogan for joining us yesterday to celebrate the launch of #TrumpTowers Istanbul!

According to a review of Trump family social media posts, Ivanka Trump made business trips to Turkey in 2009, 2010 and 2012.

In 2015, Trump acknowledged having a potential “conflict” when it came to issues involving Turkey.

“I have a little conflict of interest because I have a major, major building in Istanbul,” Trump said in 2015. “It’s a tremendously successful job. It’s called Trump Towers — two towers, instead of one, not the usual one, it’s two,” Trump said in an interview with Stephen Bannon, then chairman of Breitbart News.

A lawsuit filed by 29 senators and 186 House Democrats — one of three lawsuits that have alleged that Trump is in violation of the Constitution’s emoluments clauses, which bar the president from receiving monetary or other benefits of value from foreign or U.S. state entities while in office — claims that Turkey has among the highest number of foreign business ventures in which Trump is at least a partial owner, with 119 listed. Others include China, with 115, and the Philippines, with 121.

Businesses linked to the Turkish government are also major patrons of the Trump Organization. Turkish officials have made 14 visits to Trump properties, more than any other country, according to an analysis performed for NBC News by Citizens for Responsibility and Ethics in Washington, or CREW.

Government watchdogs say those ties mixed with unpredictable policymaking are precisely why Trump’s business dealings have been so concerning, especially since the president has refused to divest from them or establish a blind trust.

Richard Painter, the chief ethics lawyer in the George W. Bush administration who has been a frequent Trump critic, says the lack of any buffer between the president and his business interests is both a violation of the Constitution’s Emoluments clause as well as long-held presidential precedent.

“Now you’ve got his business interests at the negotiating table in addition to everything else,” Painter told NBC News.

He said Turkey "had a democracy that is flipping and going in the wrong direction.”

“Can you imagine if the Roosevelt family had business interests in Germany in the 1930s” before World War II, he asked. “It creates points of vulnerability and that’s where we are.”

“You can’t have a president with business interests in hot spots all over the world,” Painter added.

In the summer of 2016, Erdogan called for the removal of the Trump name from the buildings after Trump called for a ban on individuals from certain Muslim countries traveling to the United States.

Then, in November of 2016, retired Lt. Gen. Michael Flynn, Trump’s former national security adviser, wrote an op-ed favorable to Erdogan, who has consolidated his power and locked up thousands of people after a failed 2016 military coup, including many who had nothing to do with it.

Flynn, who was paid $530,000 for consulting work in Turkey prior to the 2016 election, violated U.S. law in not registering with the U.S. government for the work until almost a month after he was fired as Trump’s national security adviser in February 2017.

Trump, at the time, said the U.S. shouldn’t criticize Erdogan for a crackdown that’s included taking over dozens of television and radio stations and arresting reporters, according to Human Rights Watch. He even told reporters he gave “great credit to him for turning it around."

“It’s exactly why you don’t want the president to be in business,” said David Cay Johnston, who wrote a book titled “It’s Even Worse Than You Think” that examines Trump’s foreign conflicts of interest. “You don’t know whose water he’s carrying, except in Donald’s case, it’s always his own water,” he added.

Alan Garten, a lawyer for the Trump Organization, did not respond to a request for comment for this story.

Ivanka Trump’s main business contact in Turkey has been Mehmet Ali Yalcindag, who is the son-in-law of Dogan Holding founder Aydin Dogan, the developer behind the Trump Towers in Istanbul.

Yalcindag considers himself a close friend of Trump and his family. After the Dogans invested $400 million in Trump Towers, Trump said “we have a great, great friendship and relationship with them.”

TAIK and Dogan Holdings did not respond to requests for comment and Yalcindag could not be reached for comment.

Last year, in an interview with several journalists, Yalcindag expressed confidence that Trump would ultimately sympathize with Turkey’s approach to foreign policy.

“U.S. President Donald Trump thinks regional problems should be resolved by regional actors. In this regard, the U.S. should see what is happening on Turkey’s borders from the point of view of its strategic ally, Turkey,” Yalcindag said.

According to Trump’s financial disclosure forms, the Trump business relating to the licensing of the Trump name to the Trump Towers Istanbul property in Turkey earned him between $1 million and $5 million in royalties in 2015 and 2016. The royalties decreased, according to his disclosures, to between $100,001 to $1 million for 2017 and 2018.

The conflicts extend to Trump’s hotel in D.C. Soon after the November 2016 election, “[a]bout 100 foreign diplomats, from Brazil to Turkey” were given “a sales pitch about [Defendant]’s newest hotel,” according to the Democrat-filed lawsuit.

There have been four events related to the Turkish government at his hotel, according to CREW. Two of the four were held by nongovernmental organizations: the American-Turkish Council and the Turkey-U.S. Business Council, both of which have ties to the government, and one of the events was sponsored by a Turkish airline that's co-owned by the state. This year, two advisers to Erdoğan and the ministers of trade, defense and treasury all attended one of the events.

More from NBC News:
White House refuses to turn over documents to Democrats in impeachment inquiry
Trump allies respond to second whistleblower: 'Why should I care?'
GOP Sen. Johnson says Trump has been 'sabotaged' since day one