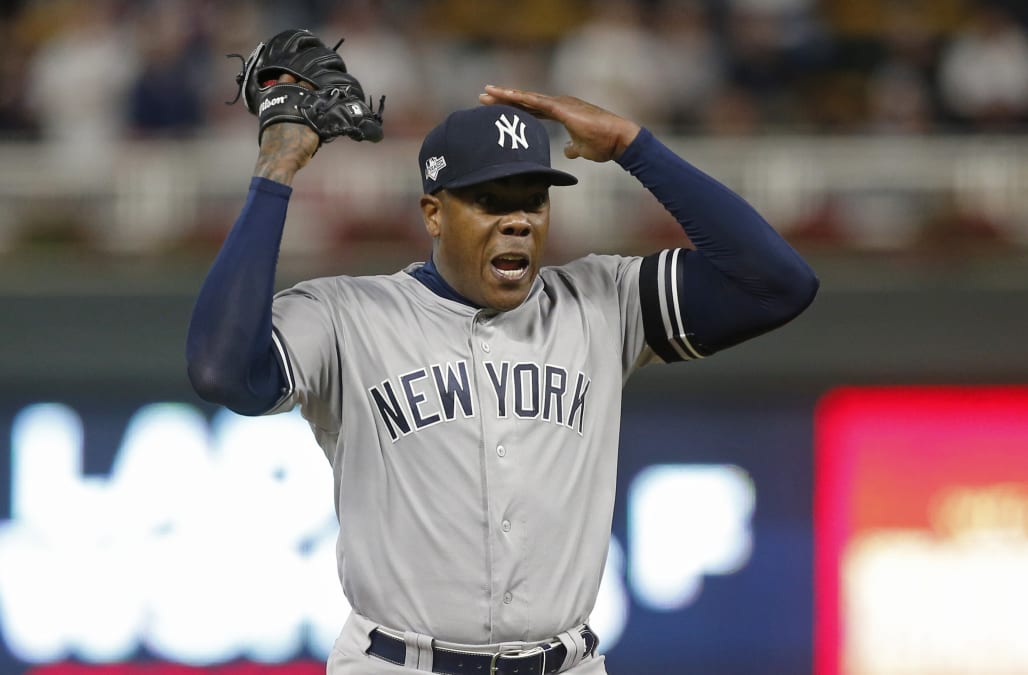 Baseball’s long-held tradition of celebrating every playoff victory like a World Series championship almost had serious consequences for the New York Yankees on Monday.

Closer Aroldis Chapman came away from the clubhouse champagne celebration after an ALDS sweep of the Minnesota Twins with an injury to his pitching hand.

After being spotted with a heavy wrap on his left hand, Chapman told reporters that he got hit with a bottle but that it was no big deal.

“I was just celebrating and everyone was jumping around,’’ Chapman said through an interpreter, per the New York Post. “I got hit with a bottle, but it’s fine.”

That certainly doesn’t look fine. Giant wraps like that don’t indicate that everything is OK. But the Yankees haven’t made any official announcements on the injury, so for now we’ll have to take Chapman’s word for it.

General manager Brian Cashman did acknowledge the injury to the Post, but appeared to be in the dark with the rest of us.

“I saw it when he walked by,” Cashman said. “It’s a question on my mind. You know what he did? He gave me a fist-bump with the wrap on his wrist. So, I was like, what’s that? But they were all going out on the field and he had a huge smile on his face. So I have no answer as to what that is. But I fist-bumped it.”

That’s an odd substitute for an injury report.

But again, we’ll have to take their word for it for now.

Game 1 of the ALCS is scheduled for Saturday, so the Yankees have a few days off before facing the winner between the Houston Astros and Tampa Bay Rays.

We should know by then if there’s more to Chapman’s heavily wrapped left hand.