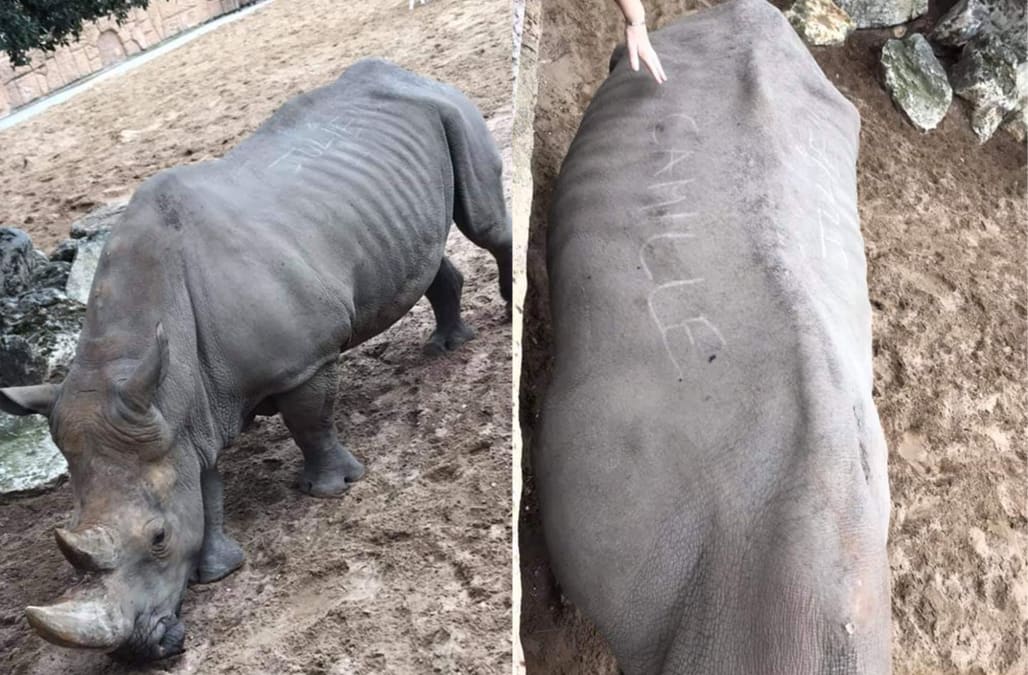 A French zoo is expressing its outrage at the "stupidity and disrespect" of visitors who used their nails to scratch their names into the back of one of its rhinos.

Photos of the 35-year-old female white rhinoceros with the words "Camille" and "Julien" etched into its skin first emerged on social media earlier this week, according to the AFP.

The incident occurred at the La Palmyre zoo in southern France, which houses more than 1,600 mammals and receives more than 700,000 visitors each year. The park said it would not take any legal action against the unknown perpetrators; however, it strongly disavowed the actions in a Facebook post on Wednesday.

"The park's management is outraged by the stupidity and disrespect of the authors," the zoo's post said.

The post went on to say that visitors can reach over and touch the rhinos when viewing them in the zoo's enclosure, a "moving" experience it said allows people to appreciate "the diversity and beauty of nature."

Another example why zoos and circuses with animals should go. Imbeciles in a French Zoo in La Palmyre carved their names in the skin of a Rhino. Only in zoos a Rhino can be approached as if it was a domesticated animal. pic.twitter.com/GpFrGMuNkQ

Park management said it was able to remove the writing with a brush, a process it said was done without harming the rhino, which is named Noelle. The zoo said Noelle was relatively unfazed by the incident.

"The animal may not even have realized," Pierre Caille, the zoo's director, told the AFP. "We quickly brushed the writing away and there was no harm to the animal."

Caille also told the AFP that the park would consider installing surveillance cameras to ensure that something like this doesn't happen again.

More from Aol.com:
Musician mauled to death by grizzly bear while trying to record sounds of nature
Shocking bullfighting video shows animal killed in front of children: 'It is an education of sadism'
Giant lizard attack: Australian couple injured by huge reptile in 'horrific and freak ordeal'