Antonio Brown showed off his burned feet on 'Hard Knocks,' and it wasn't pretty 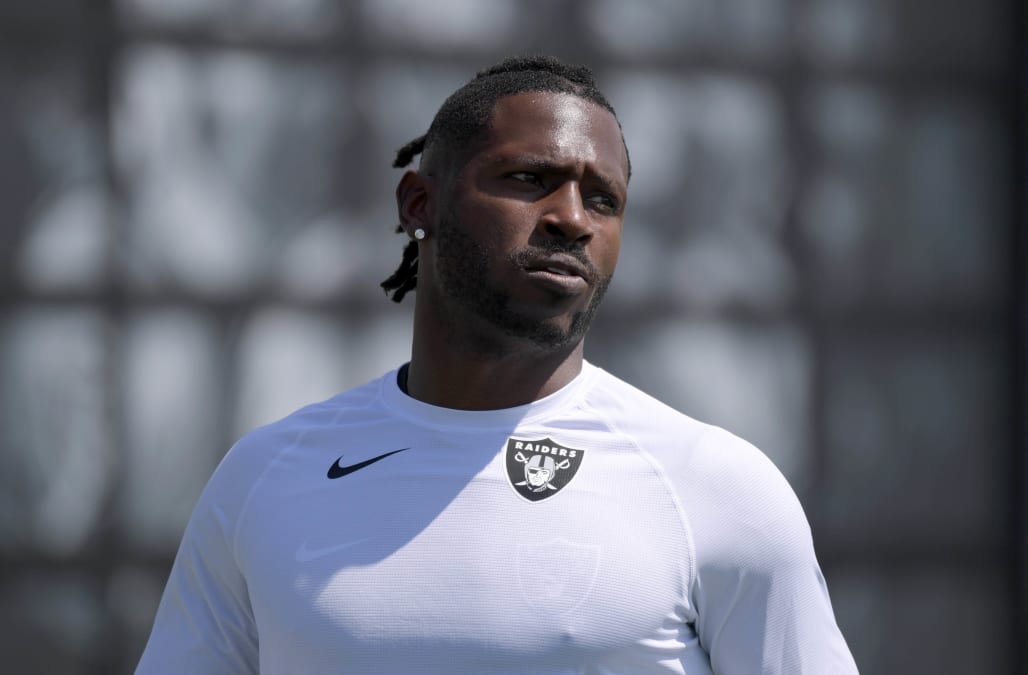 For almost every week of “Hard Knocks” through the years, we had little preconceived notion of what that week’s episode would focus on. We were willing to go wherever the producers took us.

If we were paying close attention to that year’s “Hard Knocks” team, maybe we knew a key storyline or two from the past week. But it has been rare for viewers to tune into the HBO show expecting to see a story play out. Chad Johnson getting cut by the Miami Dolphins was an example, but a rare one.

Not this week. The biggest stories of the NFL the past week were the weird cryotherapy and helmet controversies swirling around Oakland Raiders receiver Antonio Brown. Any conversation about Brown the past few days included speculation of how HBO would present those storylines. Nobody was going to be happy watching some undrafted rookie passing the time in training camp by playing guitar in his dorm room. It put a lot of pressure on HBO to deliver, perhaps more than any other week in the show’s history, which dates back to 2001.

They didn’t waste much time getting into Brown’s plight, with some awful images of his burned feet. HBO clearly didn’t have enough footage to make a bulk of the episode on Brown, but the producers did their best to deliver.

Antonio Brown: ‘You want to see it?’

Tuesday night’s episode started as the first one did, with Gruden yelling some obscenities to fire up his team. That was fine last week, but everyone tuned in this week to see one thing.

To catch anyone up to speed who has paid no attention to NFL news over the past week: Brown was out of practice with injuries to his feet after a cryotherapy mishap, then a bombshell story dropped that Brown was threatening to not play football if he couldn’t wear his old, recently outlawed helmet. Brown had a hearing with the NFL, an arbitrator ruled against him, and Brown said he’d come back to training camp. You won’t find many weirder weeks for an NFL player.

Brown’s plight with his feet was a topic a few minutes into the show. Gruden and head athletic trainer Rod Martin discussed having to wait for Brown’s feet to heal. Then Brown was on screen.

He peeled off his socks and revealed that the bottom of both feet had large patches of dead skin peeling off.

Brown also hilariously said his feet were getting “circumcised.” And for the first time, Brown explained himself what happened. He said he was on a vacation in Paris, still training, and wanted to get “cold therapy.”

“I got out and I felt my foot burning. So I was like, man, I feel a hot sensation,” Brown said. “The next 24 hours, it swelled up, got really big, I couldn’t really walk and put pressure. They drained a little out, scalpel the next day, scissors the next day, and let it leak all out.”

“Now it’s just new skin,” Brown said. “I’m just trying to get my feet used to feeling it, but feels like I’ve got a big patch of open whoopee cushion, you know?”

HBO owes Brown one. Without his cooperation on a controversial issue, it didn’t seem like the crew had a lot of material. But what they showed was memorable, for better or worse.

Then “Hard Knocks” did its “Hard Knocks” thing and transitioned to how rookie receiver Keelan Doss could get an opportunity with Brown out, introducing a new unknown character to the show.

Jon Gruden: ‘I wish he was here’

The show moved away from Brown for a while, having delivered at least a few minutes of what everyone was waiting for. There were clips on Gruden yelling at backup quarterback Nathan Peterman, Derek Carr making rookie receiver Hunter Renfrow (painfully) sing “Lean on Me” in a team meeting and Renfrow getting booed back to his seat, rookie defensive lineman Maxx Crosby getting a tattoo and a very young Sean McVay getting lessons from Gruden in their Buccaneers days.

About halfway through the episode, HBO circled back to Brown. At a joint practice, Rams safety Eric Weddle was cracking jokes with Carr about Brown’s feet, then there was a moment with Gruden talking about it.

“We have a lot better team. I just wish we’d see our receiver at some point,” Gruden said.

Gruden was told it will work out.

Then we got to controversy No. 2. HBO showed news clips of the Brown helmet controversy, but not much else. Then Gruden was shown in a meeting room.

“Has anybody seen my friend Antonio Brown?” Gruden said with a classic Gruden smile. “He’s good, man. I wish he was here.”

It was clear HBO didn’t have much footage of the helmet issue, which has dominated headlines since Friday afternoon. There was no behind-the-scenes discussion of the helmet controversy by any Raiders coaches or players, and no new interview with Brown about it. Brown spoke to the media after practice Tuesday, but the episode needed to be edited and finished before then. That was the challenge: If HBO didn’t have compelling film on it, there wasn’t much the producers could do. At the end of Tuesday’s show, HBO teased there will be more on Brown and the helmet issue in next week’s episode.

Gruden ‘optimistic but concerned’ about Brown

The issue with Brown’s feet came up again, when we saw a pregame production meeting that included play-by-play radio voice Brent Musburger. General manager Mike Mayock was talking to Musburger and broke some news.

“He’s like a thoroughbred, and he’s going to be fine,” Mayock said. “I’m hoping he’ll be back next week, full speed.”

The Raiders would be happy if Brown was back at full speed in the next week. Gruden told the radio team he was concerned about Brown missing time but hoped he’d be back soon.

Based on last week’s stellar ratings and the drama of the past week, it would be no surprise if this week’s episode ranked at or near the top of the highest-rated episodes in “Hard Knocks” history. Most of it seemed like a normal “Hard Knocks” episode and for the first time, almost everyone was expecting something else.