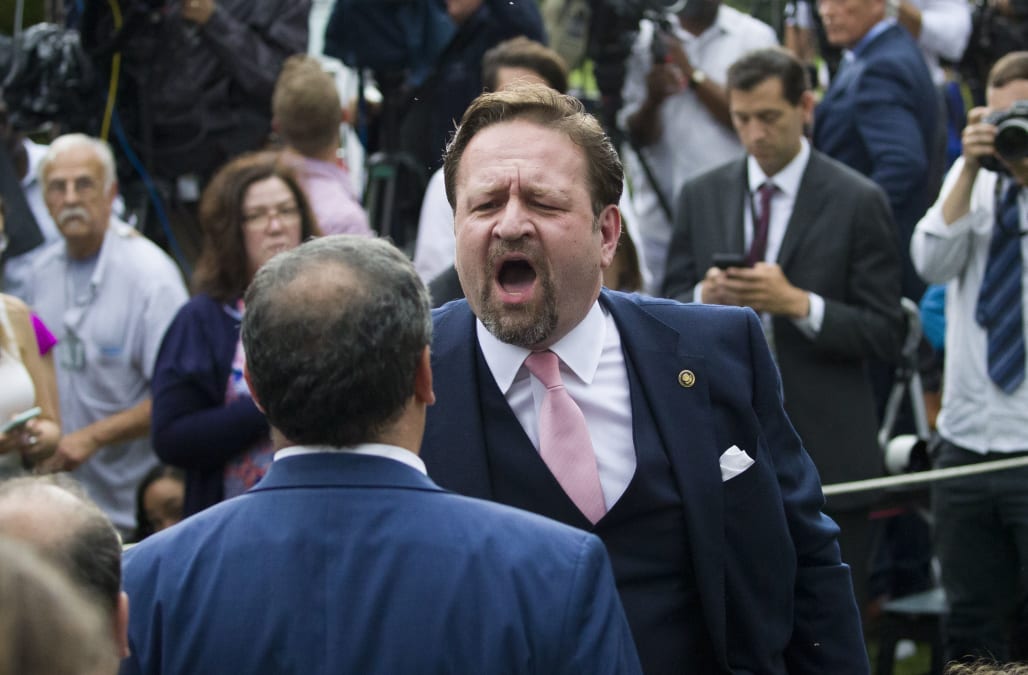 WASHINGTON — It was an unusual spectacle, even by the unconventional standards of the Trump administration. After President Trump invited a group of right-wing and fringe media figures to the White House for a “social media summit” on Thursday, the event ended with a former presidential adviser and a CNN political analyst getting into a heated exchange in the Rose Garden.

The fracas followed an event that was billed as a “news conference” in which Trump announced an executive order directing U.S. agencies to provide the Commerce Department with all available data on the citizenship and non-citizenship status of everyone living in the country.

The Rose Garden event followed the social media summit and many of the same conservative media figures attended both, sandwiched between the president and the White House press corps.

When Trump finished speaking, CNN political analyst Brian Karem and former White House deputy assistant Sebastian Gorka exchanged words across the rope line that separated the two groups. Karem said something inaudible that prompted Gorka to charge across the garden and get in front of him.

“You’re not a journalist! You’re a punk!” Gorka fumed.

Gorka turned and walked away as the president’s other guests chanted his name.

One reporter from the White House press corps admonished Gorka as he left.

“You should not be attacking journalists like this!” she said.

Another man who was with the media contingent invited by the president came to Gorka’s defense.

“Just for the record, he’d kick your punk ass,” the man said to Karem.

Karem responded by shaking his head and walking towards the man. Security stepped in and guided Karem away.

The surreal scene was the culmination of a day when Trump aired a long list of grievances about the mainstream media and major technology companies. Speaking in the East Room of the White House, Trump told his guests that they were “fulfilling a vital role in our nation ... challenging the media gatekeepers and the corporate censors to bring the facts straight to the American people.” In the nearly hour-long speech, Trump repeatedly suggested there was a conspiracy that was preventing him from having more followers and viewers on social media platforms.

"There's no doubt in my mind that I should have millions and millions — I have millions of people, so many people I wouldn't believe it, but I know that we’ve been blocked,” Trump said. “People come up to me and they say, ‘Sir, I can’t get you. I can’t follow you.’”

Trump’s comments echoed persistent complaints from conservatives that Facebook and Twitter are biased against them. But there is no research indicating that right-wing content has been systematically disadvantaged on social media platforms.

The group invited to Trump’s social media summit included conservative activists, meme creators and pro-Trump media personalities. A source familiar with the planning of the event confirmed the country’s two largest social media companies, Facebook and Twitter, were not invited to participate. According to Vice News, the only social media network that publicly indicated it would be participating is Minds.com, a fringe site that is has been “home to several neo-Nazi extremist groups.”

Following the president’s remarks, the group moved out into the Rose Garden for what was essentially an inverted version of a normal presidential news conference. Typically, when the president steps into the Rose Garden for an announcement, it occurs under sunny skies with a group of distinguished guests and the White House press corps seated behind them. On Thursday, as Trump walked out in the Rose Garden, thunder rumbled and dark clouds filled the sky above the White House. The largely pro-Trump contingent from the summit sat on chairs and the credentialed media was roped off and standing behind them. Some of the president’s guests turned towards the press corps to take pictures and mock them.

“Fake news panorama,” said Gorka as he pointed his phone at the reporters.

In a White House where the administration has eliminated press briefings and taken away passes that allow reporters access to the building, the upside down press conference had the air of prophecy. It was a glimpse of a future where the president leaves major media outlets on the outside and instead speaks to a handpicked groupof admirers.

Yet even in front of his friendly audience, Trump’s willingness to engage with the media was limited. The Rose Garden event was billed as a “news conference,” which typically includes at least a couple of questions and White House staffers were seemingly prepared fort that, with microphones at the ready. However, when he was done speaking about his latest executive order, Trump turned and walked back into the Oval Office without taking questions — even from members of the right-wing press.

“Talk to us! The real news!” one of the president’s guests shouted in vain.

After the president exited, the two groups of media made their way to the exits and Gorka had his clash with Karem. In an email to Yahoo News shortly afterwards, Karem said the incident began when he “invited him [Gorka] to go and talk outside.”

“I didn't think the Rose Garden was the appropriate setting. But he took it to mean, as he later explained, that I wanted to be physical,” Karem said. “My intention was never to provoke a physical confrontation in the Rose Garden.”

Karen also said he went up to Gorka after their exchange and offered to shake hands, but Gorka refused.

Gorka told Yahoo News he responded because Karem was “challenging me to a fight in the Rose Garden” and asked him to “come outside” and “settle this.” He added that Karem was a “punk of a guy.”

As Gorka walked off in the wake of the war of words, the conservative singer and activist Joy Villa called out to the White House press corps.

“Fake news is over, be real journalists,” Villa said.

Villa was wearing a red, white and blue dress emblazoned with the word “Freedom.” As she showed it off, Yahoo News asked if she thought freedom meant yelling at journalists. Villa said her only objection is to “fake news.”

Villa’s comment echoed what Trump himself had told his audience at the social media event.

"To me, free speech is not when you see something good and then you purposely write bad,” Trump said. “To me that's very dangerous speech, and you become angry at it.”

More from Yahoo News:
With Acosta in crosshairs, Trump unleashes tweet barrage at everything else he can think of
Calls mount for Labor Sec. Acosta to resign over plea deal for alleged pedophile Epstein
‘A pompous fool’: Trump trashes U.K. ambassador who disparaged his administration