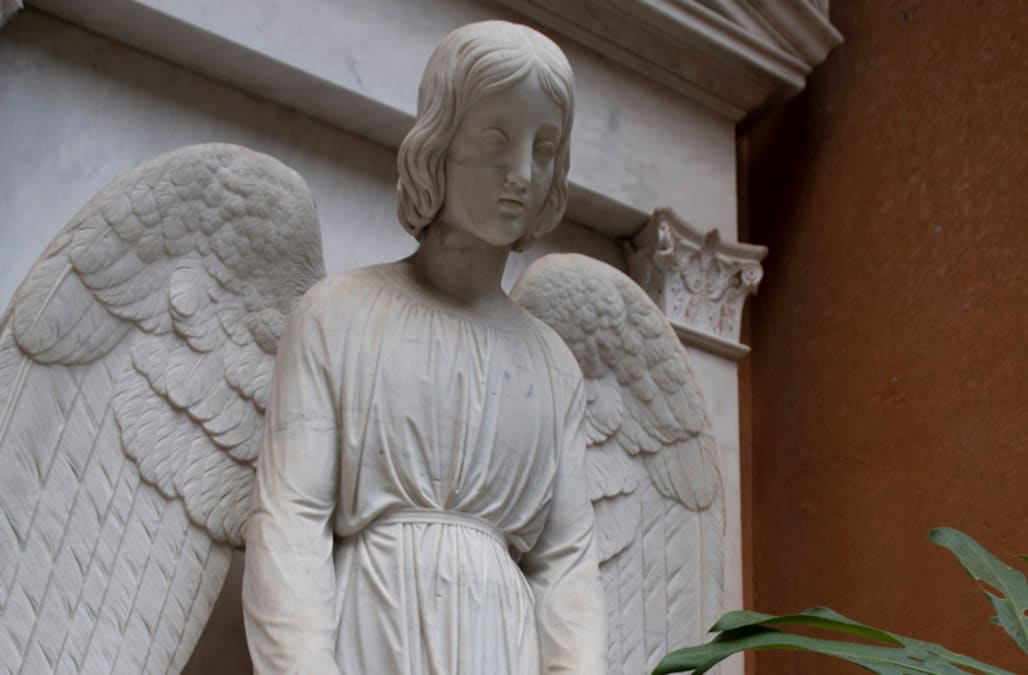 ROME — Forensic experts searching two 19th century tombs in the heart of the Vatican in hopes of solving the mystery of a teenage girl who vanished more than 30 years ago came up empty handed Thursday.

"They found nothing, not even the remains of those who were meant to officially be buried there," said the missing girl's brother, Pietro Orlandi. "I am relieved by it. They dug under one of the tombs and found a room underneath completely empty. In the other one they found a sarcophagus, also empty"

Emanuela Orlandi, the daughter of a Vatican bank employee, was 15 when she disappeared after leaving a music lesson in Rome in 1983. The teenager's family believe her body could be buried in a tomb in a tiny cemetery inside the Vatican, after they received an anonymous tip last year.

RELATED: Parts of the Vatican off-limits to tourists

See the Parts of the Vatican Off-Limits to Tourists

The next pope will prepare to engage the masses in his private office above St. Peter's Square.

The cardinals sleep and eat at the Domus Sanctae Marthae, a residence in Vatican City, during the conclave process.

Each day, they walk from the Domus Sanctae Marthae to the Sistine Chapel, where voting is conducted.

The Council for the Proclamation of Saints decides who is canonized in this off-limits conference room.

The pope and his assistants will prepare letters and official documents in the study of the Papal Apartments.

The pope entertains guests in a private dining room, where the food is "simple, but good."

The Swiss Guard, the world's smallest standing army, stocks its gear under the streets of Vatican City.

The garments that the guards wear under their 8-pound uniforms are made from scratch in the tailoring room.

Three restoration laboratories for marble, tapestries and paintings sit beneath the Vatican's museums and galleries.

Tapestries are rehabilitated in this immaculate white room.

The archives comprise over 50 miles of shelves that include invaluable artifacts, such as a note written by Michelangelo dated January 1550.

In a room near the secret archives, one man restores the thousands of wax seals from letters sent to the Vatican over the centuries.

The Vatican Printing Press, which was founded in 1626, handles over 5,000 orders per year printed in at least 15 languages.

The Vatican radio station broadcasts in 40 different languages (and costs $25 million per year to run).

The body of Pope John Paul II lies in the grottoes below St. Peter's Basilica.

Also under St. Peter's basilica is the supposed tomb of St. Peter (i.e. the first pope).

The Room of Tears is where the new Pope will put on his white papal vestment for the first time.

"'If you want to find Emanuela, search where the angel looks," a tipster wrote in an unsigned letter posted alongside a picture of a statue of an angel in the Teutonic Cemetery, the family's lawyer, Laura Sgrò, told NBC News.

Shortly before 8.15 (2.15 a.m. ET) on Thursday morning, the rector of the Teutonic College recited a prayer in front of the "tomb of the angel" and an adjoining tomb, Alessandro Gisotti, the director of the Vatican press office said in a statement. A 15-person team then began excavating the tombs of Princess Sophie von Hohenlohe and Princess Charlotte Frederica of Mecklenburg, who died in 1836 and 1840, respectively.

The Orlandi family had asked for the tomb under the statue of an angel holding a "rest in peace sign" to be opened, but the Vatican decided a second nearby tomb should also be excavated to "avoid misunderstandings," Gisotti said. He said he could not predict how long the operation would take.

This is not the first time a tomb has been opened in the mysterious case that has gripped Italy for more than three decades.

In 2005, an anonymous tipster claimed Orlandi's body was buried in the tomb of Enrico de Pedis, a criminal gangster who operated in Rome in the 1970s and 1980s, according to Giancarlo Capaldo, a state prosecutor who worked on the case between 2012 and 2016. In 2012 his tomb was finally opened, but Orlandi's remains were not found. Pietro Orlandi earlier told reporters that after years of the Vatican not cooperating it appeared the Holy See was beginning to accept the idea that it may hold some responsibility for what happened. If his sister's remains were found, Orlandi said he would expect the Vatican to open up an investigation into the murder and the concealment of the corpse.

"Now it's not just us as a family, it seems also the Vatican wants to find out the truth about what happened," he said.